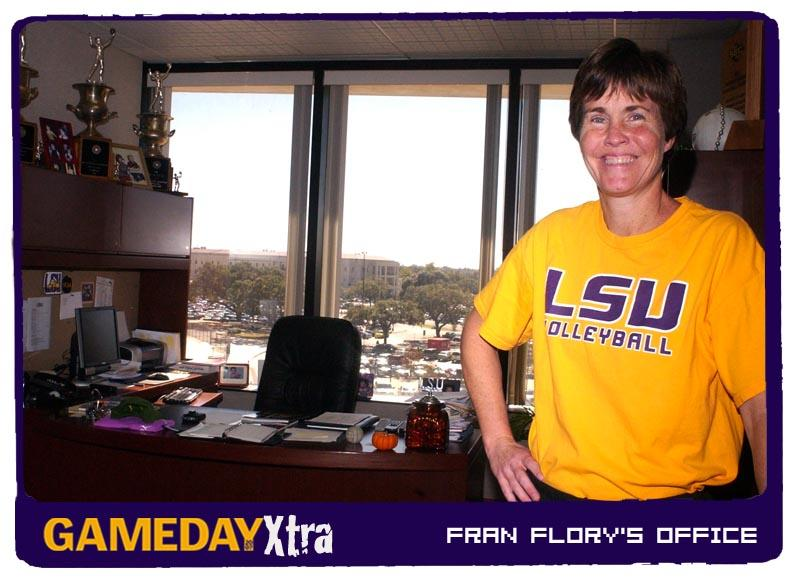 Now in her 10th season as LSU’s head coach, Fran Flory has been instrumental in the greatest triumphs of the Tiger volleyball program. A Baton Rouge native, she was an assistant coach on LSU’s 1990 and 1991 NCAA Final Four teams. She then served as head coach at Southeastern Louisiana and Kentucky before returning to LSU in 1998 to lead the Fighting Tigers.

Under Flory’s direction, LSU has once again emerged as a nationally-prominent program. The 2007 Tigers have claimed LSU’s third consecutive SEC Western Division title, and they are in a position to receive an NCAA Tournament berth for the third straight season. A tour of Flory’s office reveals her respect for the past and a burning desire for future glory.

Coach Gunter
One of the people Fran most admires is the late Sue Gunter (left, pictured at the 2001 WCWS with gymnastics coach D-D Breaux, Flory, and former volleyball assistant Tonya Johnson). Gunter, a member of the Naismith Basketball Hall of Fame, passed away in 2005 after directing the LSU program for 22 seasons. “At the beginning of every season when I walk into the PMAC, I think of Sue Gunter,” Fran says. “There’s not a season I don’t think that her spirit is gone. That is a picture I look at quite often.”

Tigers’ Den
Fran has an extensive collection of Tiger memorabilia, much of it given to her by her late father, Pete Teeter, a Baton Rouge antiques dealer. In the background, is an LSU Volleyball cross-stiitch made by her mother Yvonne after Flory joined the LSU coaching staff in 1989 as a graduate assistant.

Next Generation
Fran and her husband Ken are proud parents of Lindsay and Nicholas. Family pictures sit between LSU’s conference title trophies. “Having pictures of my family in between them shows a balance for me. It shows that I want to win championships and raise my family.”

That ?70s Team
A photo of the 1976 Tigers, LSU’s first sanctioned volleyball team, is featured in Fran’s office. “Notice that they are wearing basketball uniforms with high socks and no knee pads,” she says. “It’s kind of interesting to think about the changes over the years.”

Green Days
Few people know about Fran Flory‘s secret passion ? mowing lawns. “I love John Deere,” she says. “For my 40th birthday, I asked for a John Deere riding lawn mower with a cup holder. And I got it. I’ve already talked to (LSU groundskeeper) Todd Jeansonne about mowing either the softball field or the soccer field.”

Road Warriors
After Hurricane Katrina transformed the Maravich Center into a field hospital, Fran’s 2005 SEC West champions were forced to play their first 17 matches on the road, and they traveled over 14,000 miles during the season. Their odyssey was documented by former LSU volleyball player Lauren Leaumont in a story that appeared in Volleyball Magazine.