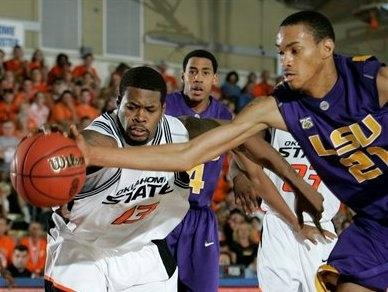 LAHAINA, Hawaii — Down 21 points with 17:11 to play, an injury-depleted LSU Tiger team showed new signs of life and rallied to have a shot in the air to tie the game in the final 70 seconds before falling to Oklahoma State, 83-77, in the first round of the EA Sports Maui Invitational Monday at the Lahaina Civic Center.

The Tigers (2-1) fall into the consolation bracket and will meet the tournament host, Chaminade, which lost to Marquette, 74-63, in its first-round game. The Tigers and the NCAA Division II Silverswords will meet in the first game in the consolation semifinals at 8:30 a.m. HST (12:30 p.m. CST). The game will be televised on ESPNU with Dave Barnett and Jimmy Dykes calling the action. Jim Hawthorne and Kevin Ford will call the game on the LSU Sports Radio Network, in the GeauxZone at www.LSUsports.net and on the SEC Channels of XM Radio.

The Tigers dressed 10 players for the game and played eight, but junior forward Tasmin Mitchell is probably out for the remainder of the tournament with a bad left heel that also has some tendon problems in the ankle. He made his 71st consecutive start at LSU but only played the first six minutes before becoming a spectator as he was noticeably hobbled after not being able to practice more than bits and pieces of the three practices prior to the game.

Of the other seven players who got into the game, all played at least 17 minutes, including Garrett Green who was seeing his first action of the season.

For the third straight game, LSU got off to a sluggish start, turning the ball over 18 times in the first half while shooting just 30 percent and falling behind by 18 points, 42-24. It was the ninth time in the John Brady era that the Tigers trailed by that much or more at the half. The Cowboys had two 20-point advantages in the half as OSU made five three-pointers and shot 47 percent.

Three times in the first five minutes of the second half the Tigers feel behind by 21 points, the last at 55-34, with 15:13 to play as the LSU bench looked for any signs that they could swing the momentum.

But LSU went on a 14-2 run with Garrett Temple and Marcus Thornton hitting a three, Bo Spencer getting a steal and a layup, Temple another three and out of a media timeout, a three-pointer by Chris Jackson and the lead the down to nine at 57-48 with 11:35 to play.

The lead drifted from eight to 13 over the next nine minutes before LSU made one final run. Down 80-71 with 2:30 to play on a Marcus Dove layup, LSU came down and Thornton drove for the hoop made the bucket and the ensuing free throw after being fouled to cut the game to 80-74 with 2:12 to play. OSU turned the ball over on the next possession and Chris Johnson hit his third three of the game to make it 80-77 with 1:42 to play.

OSU took a 30-second timeout and after a missed three-pointer by Obi Muonelo, the Tigers rebounded and called their own timeout with 1:08 to play. The Tigers worked the ball around and Temple came up open at the top of the key. His three-pointer to tie with 51 seconds left went in and out and the Cowboys rebounded.

“We can’t beat teams that are sound defensively like Oklahoma State by making poor decisions with the ball,” said LSU Coach John Brady. “But on the other side to be down 21 with about 16 to go and have a shot in the air to tie it means there is something within your team that you have a chance to build and grow on. We need to learn how to start the game and then the toughness which with we need to play with and the execution that we need to play with has to get better to have a chance for us to win against the people we are scheduled to play.

That led to a crucial sequence in which OSU missed a three with 23 seconds left and rebounded the ball. The Oklahoma State player was in the corner of the court as the clock counted down. Bo Spencer knocked the ball away and as the ball was loose, the official on the far side awarded a time out to Oklahoma State. The Tigers were forced to foul and the Cowboys (2-1) made three free throws to seal the win.

Thornton led LSU in scoring with his third 20-point game to start his LSU career, scoring 20 points. Johnson upped his career scoring high from 13 points to 19 points, hitting 8-of-9 field goals, including three treys, in 37 minutes. Temple was just one point off his career high with 17 points as he hit three treys and Spencer added 10.

“I thought our team got better as we went along,” said Brady. “We got some toughness about us. We’re not a very physical team by look so we have to be a fundamental team by the way we play. We showed some fight. We executed a little better. We got to the foul line. We rebounded the ball better. We had eight turnovers the second half. That’s why we were able to get the score right at the two minute mark with a shot in the air to tie and hopefully we can build on this.

“We are going back to the hotel, look at the tape of the second half and we are going to prepare for Chaminade and Chaminade is no walk in the park. I saw them against Marquette and they had that game within reach the whole time. At 8:30 (Hawaii time) in the morning that’s a trap game for us. This young team we’ve got to mentally get them ready to play. We can’t be disappointed in today to the point it will carry over to (Tuesday). We are a work in progress. Our team learned a lesson today. We’ve got to start it better. Take care of it better, but I think our team improved as we went along.”

On Tasmin Mitchell‘s situation, Brady said, “Tasmin Mitchell has a real ankle problem and I don’t know what we are going to do with that. When we get back to Baton Rouge, I’m going to have someone take a look at that. He’s got a bone spur with tendonitis. He limped around the first two games really. He hasn’t practiced since we played McNeese. I’m not going to put him in a situation where he’s good two games, limps around two games, that’s not fair to him. I’ll just bite the bullet and do what’s necessary with him for his career. We’ll make the determination about what we are going to do with Tasmin once we get back to Baton Rouge.”