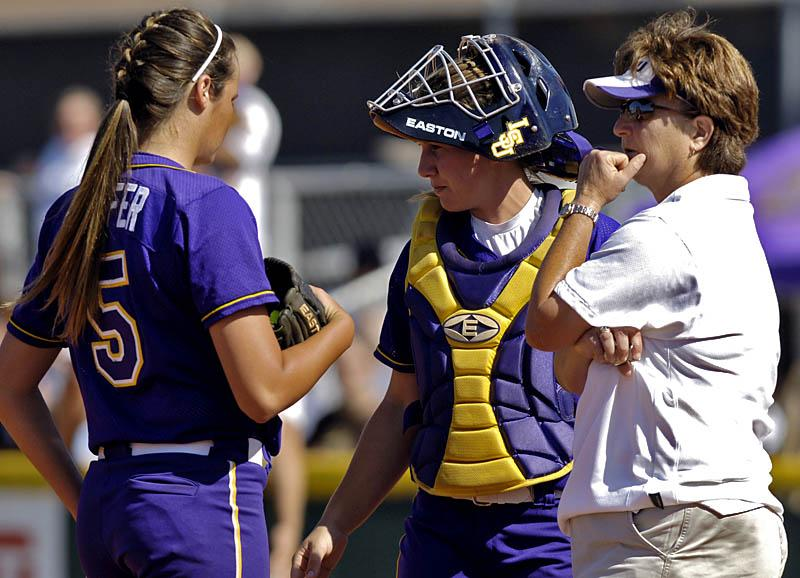 The seven players, who represent six states stretching from Georgia to California, including one from Louisiana, have all signed to play for the Tigers beginning in the 2009 season. From east coast to west coast, the Tiger signees include Katie Hamilton from Acworth, Ga.; Courtney Hollier from Kaplan, La.; Morgan Russell from Edmond, Okla.; Brittney Mack of Round Rock, Texas; Ashley Langoni from Pueblo West, Colo.; Anissa Young from Fontana, Calif.; and Juliana Santos from Newman, Calif.

“James DeFeo, Megan Smith and I are very excited about the 2008 LSU softball class,” said Girouard. “James and Megan did much homework on the front end with this class as they identified these young women, got them to visit during last year’s football season, and to commit to the Tigers.

“These 2008 signees are an important class as we will say goodbye to seven seniors this spring. These seven young women will fill the needs of our team: athleticism, great hitting potential, a very good pitcher and once again welcome sound softball parents to the team.”

As a member of the Kell High School team in Marietta, Ga., Hamilton is leading her team as the Lady Longhorns won the Region 6-5A softball tournament and advanced to the sectional tournament. She was named to the 6-5A all-region softball team this fall and led her team in all offensive categories as a junior last season. As a freshman, Hamilton helped Kell High School to the state title with a 33-9 record, defeating Brookwood, 1-0, in the championship game.

The daughter of Tom and Erika Hamilton, her sister, Christie, is a pitcher for the University of Georgia softball team. Hamilton is a member of the Georgia Fire travel team, which finished tied for ninth at the 2006 Amateur Softball Association Gold tournament.

“Katie is a gritty shortstop who can hit for great power and plays a very good infield,” said Girouard. “She is a very team oriented player whose older sister plays at Georgia.”

An infielder from Kaplan High School, Hollier was a Class 3A all-state selection at second base last year while hitting .438 for the season. A second-team All-District selection while still in the eighth grade, she went on to earn all-district honors again as a freshman and a sophomore. Kaplan won the 2006 state championship, 3-1, over Teurlings Catholic and advanced all the way to the state championship game once again last year, where it fell to Teurlings Catholic, 2-0.

The daughter of Carl and Julie Hollier, she is a member of the Louisiana Rebels travel ball team. When she was younger, Hollier earned Most Valuable Player honors of the Cal Ripken 9-10-year-old Boys District Tournament to lead the Kaplan All-Stars baseball team to a state tournament berth. She pitched all six innings of the district championship as the 10-year-old girl beat the boys from Abbeville.

“Courtney is a great defensive player who could play any position in the infield,” said Girouard. “She is a smooth player who is an exceptional fielder and will be a great, consistent, line drive, contact hitter.”

The daughter of Brad and Angela Russell, she is a member of the Oklahoma Ultimate Gold travel team. Also an outstanding student, Russell carries a 3.5 grade point average and is a member of the Key Club, Young Live and the Fellowship of Christian Athletes.

“Morgan fills a great need at the catching spot,” said Girouard. “A first-team all-state catcher, she is very, very solid behind the plate with her framing and receiving and has the ability to throw out runners.”

One of the top high school players in the state of Texas, Mack was named the District 14-5A Newcomer of the Year as a freshman at Westwood High School in the Austin suburb of Round Rock after hitting .420 with 13 stolen bases. Starting every game at either first base or in the circle as a sophomore, she struck out 120 in 71 innings and tossed a pair of perfect games, six shutouts and posted a 0.48 earned run average. She went on to earn first-team all-county, second-team All-Centex and first-team all-district honors.

The daughter of Scott and Janet, Mack earned second-team all-state honors and was an EA Sports second-team All-American. A member of the Stix travel team, she was the District 14-5A Most Valuable Player as a junior as Westwood High school won the area championship.

“Brittany is a power pitcher with a huge upside,” said Girouard. “Not only is she a dedicated player with a great work ethic, but she seems to be a bulldog in the circle. Brittany will add another dimension to our pitching staff.”

“Ashley is a power-hitting third baseman who could play multiple positions,” said Girouard. “Ashley can change the outcome of a game with one swing of the bat.”

A three-time All-Sunkist League selection, Young earned the league’s most valuable player honors as both a sophomore and a junior while playing for Bloomington High School in the Los Angeles area. Last season, she led the league with a .473 batting average, 48 RBI and 14 home runs to earn all-county and All-CIF honors. The Bruins finished the season at 18-10 with a 14-1 conference mark to win the Sunkist League Championship.

The daughter of Byron and Carla Young, Young carries a 3.1 grade point average and was a Principles Honor Roll selection. As a member of the California Lite travel ball team, she earned Amateur Softball Association first-team All-America honors in 2005. In 2006, she was listed as one of the top prospects for the 2008 class by Rivals.com and attended the Adidas Top 100 Recruitable Players Camp in St. George, Utah.

“Anissa is a power-hitting corner who can player either position adequately,” said Girouard. “There is no question that she has the potential to amass big numbers in her career at LSU.”

A senior at Orestimba High School, Santos led the Western Athletic League with a .539 batting average, 46 RBIs and seven home runs last season while leading the section in RBIs. The northern California native from the San Jose/San Francisco area went on to be named the league’s most valuable player as the Warrior’s finished undefeated at 26-0. As a sophomore, she also led the league with a .538 average and five home runs and was named the league’s most valuable player.

The daughter of Yvette and Rafael, she is an outstanding student, who carries a 4.0 grade point average on a 5.0 scale. During the summer, she volunteers with her former pre-school teacher to help young children develop life skills and build character. She would like to become a pediatrician and specialize in Crohn’s Disease.  Santos is a former teammate of current Tiger Ashley Applegate, who both played for the California Grapettes travel team that finished in a tie for 13th nationally at the 2006 ASA Gold tournament.

“Jules is a work-oriented athlete who will, by sheer determination and athletic ability, find a spot on the field,” said Girouard. “She is an excellent academic student who knows nothing but hard work.”

The 2008 season will begin with the Easton Tiger Classic on Feb. 15-17. The Tigers will host St John’s, Ball State, Nicholls State and Chattanooga in the three-day tournament at Tiger Park. LSU will begin the season as the reigning Southeastern Conference Western Division and SEC Tournament champion. The Tigers have now won eight SEC West titles and five SEC Tournament championships to go along with five SEC regular season titles.