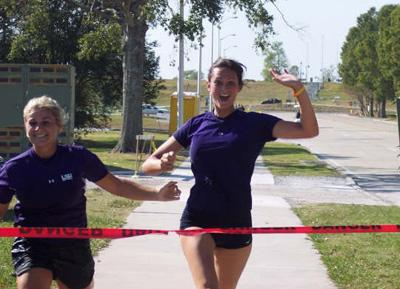 BATON ROUGE — The LSU softball team held its fourth annual Tiger Triathlon through the campus last Thursday, in a course that included running, biking and swimming.

The Tigers began with a 400-yard swim at the Natatorium. The team then biked for four miles along the levee down River Road and finished with a short half mile run down Skip Bertman Drive. The softball team competed in their four different “Tiger Teams” – Bayou Bombshells, Le Tigre, Purple Peacocks and TNT ? with the finish of each individual in the events being averaged for the final ranking. Each member of the team took part in two of the three events.

The three members of the Bayou Bombshells, seniors Dee Dee Henderson and Shannon Stein, along with freshman Casey Faile, came out on top with an average team finish of 3.66, besting the average of 4.25 for the two members of the Purple Peacocks, senior Quinlan Duhon and freshman Tiffany Shaw.

The Tigers allowed only one run in going undefeated in five games in the 2007 Fall Collegiate Classic in late October, as LSU outscored its opponents 35-1 at Tiger Park. The Tigers began the weekend with an 8-0 win over Hinds Community College, before shutting out LSU-Eunice, 6-0, and defeating Bossier Parish Community College, 5-1. On Sunday, LSU dominated BPSCC with a 14-0 win before closing out the tournament with a 2-0 win over LSU-Alexandria.

The 2008 season will begin with the Easton Tiger Classic on Feb. 15-17. The Tigers will host St John’s, Ball State, Nicholls State and Chattanooga in the three-day tournament at Tiger Park. LSU will begin the season as the reigning Southeastern Conference Western Division and SEC Tournament champion. The Tigers have now won eight SEC West titles and five SEC Tournament championships to go along with five SEC regular season titles.