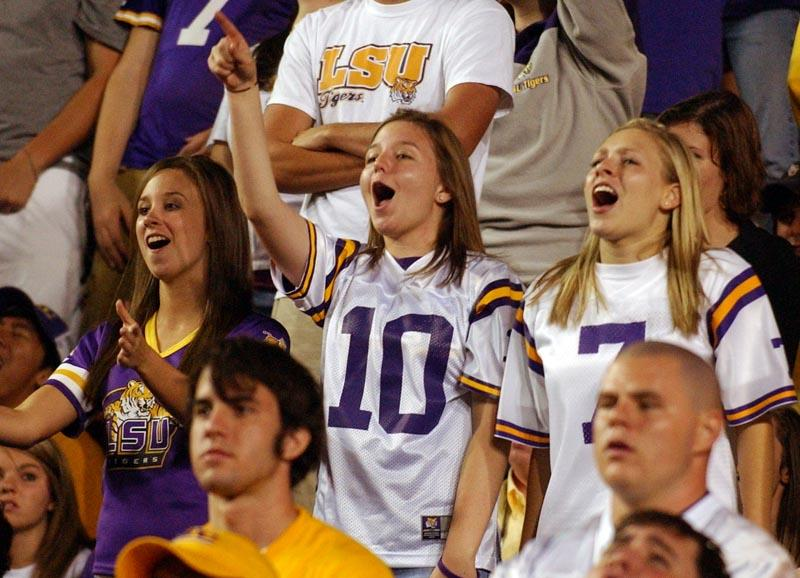 BATON ROUGE — The LSU athletics department can lay claim to a distinction no other Southeastern Conference Western Division program can, as the Tigers captured the football, women’s soccer and women’s volleyball divisional championships in the same season.

On Saturday, the football team clinched its first outright SEC Western Division title with a 41-24 win at Ole Miss. The No. 1-ranked Tigers can finish no worse than one game ahead of Alabama and Auburn in the West and will advance to the SEC Championship game on Dec. 1 in Atlanta for the fourth time in the last seven seasons. LSU also shared the Western Division championship in 1996 and 1997, but did not advance to the championship game.

The Tiger football team is now 10-1 on the season with a 6-1 mark in SEC play, having won their first four games against Western Division opponents. LSU has also won 10 games for a school-record third consecutive year.

The Tigers increased their lead in the Associated Press poll, gaining 60 of 65 first-place votes this week. LSU is also ranked No. 1in the Harris Poll this week and is expected to remain at No. 1 in the BCS standings. The Tigers close out the home schedule on Friday against Arkansas on CBS at 1:30 p.m.

With a win over Arkansas on Nov. 2, the LSU women’s soccer program won its first SEC West championship in the 13-year history of the program. The Tigers went on to advance to the NCAA Tournament for the first time in the program’s history, where LSU knocked off Samford in the first round before falling to nationally ranked Florida State in the second round.

The Tigers concluded the season at 12-5-7, with a 5-2-4 record in SEC play. LSU finished one point ahead of Auburn in the Western Division standings for the outright title, recording a divisional record of 3-1-1 with the lone West loss coming at Auburn.

The LSU volleyball team clinched its second-straight outright SEC Western Division title with a sweep of Georgia on Sunday. The Tigers have now won three-consecutive SEC West championships, sharing the title with Arkansas in 2005, before winning outright the last two seasons.

LSU volleyball is now 24-6 on the year and concluded league play at 15-5. The Tigers finished one game ahead of Ole Miss in the Western Division standings, going undefeated at 10-0 against divisional opponents. LSU will close out the season against Tulane next Saturday at 7 p.m. in the Maravich Center. NCAA Tournament selections will be announced on Sunday, Nov. 25 at 7 p.m. on ESPNU, as the Tigers will be looking for their third straight bid to the NCAA Tournament.

LSU is also just the third overall program to accomplish the tri-championship feat, which has now been done on five occasions. All four previous occurrences were recorded by SEC Eastern Division programs. Florida accomplished the feat in 1999, 2000 and 2006, all of which were outright titles. Tennessee also accomplished the distinction in 2004, but shared the volleyball title with Florida, while winning the football and women’s soccer championships outright.