Men's Basketball Squares Off Against OSU in Maui 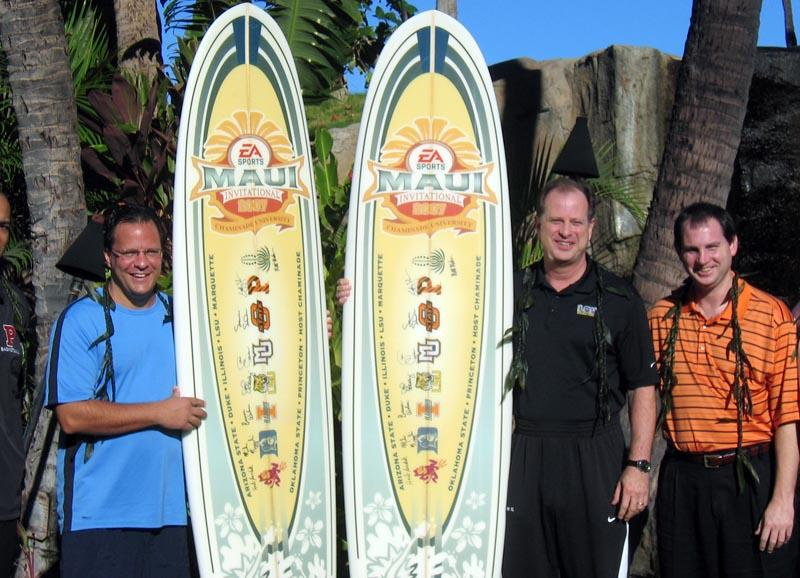 LAHAINA, Hawaii — The fun and games are just about over for eight men’s basketball team as the EA Sports Maui Invitational is set to begin Monday at the most famous rec center in college basketball, the Lahaina Civic Center.

And while a few people on the island may show up to get something from the clerk of court’s office or get a driver’s license renewed on the ground floor of the building, college basketball’s attention will be on the second floor of the building where four opening round games will be played, including the LSU Fighting Tigers taking on Oklahoma State in the second game of the tournament at noon HST (4 p.m. CST).

The game will be nationally-televised on ESPN2 with Sean McDonough, Jay Bilas and Bill Raftery on the call. The radio broadcast of the game will be available on both the LSU Sports Radio Network with Jim Hawthorne and Kevin Ford and on XM Satellite Radio on the SEC channels.

The Tigers practiced Sunday for an hour and 40 minutes in the Lahaina Civic Center with the players and many of the coaches getting their first look in person at the building they have watched games on TV for years. Assistant Coach John Treloar is making his third trip to Maui for the event, having come to Lahaina twice during his days as an assistant with Indiana University.

Sunday, Coach John Brady and all the head coaches took part in a press conference at the Aloha Pavilion, outside the Westin Maui, and then after questions and pictures joined local kids from the various Maui schools in a charity free throw shooting contest in which the schools all won cash donations from tournament sponsor EA Sports.

“We are excited to be here,” said LSU Coach John Brady at the press conference. “We have a little different team this year. We are going to have to take care of the basketball, handle some defensive pressure and rebound the ball because those are the fundamentals that Oklahoma State believes in. If we can’t do that, it will be a long game for us. Our team is excited to be here. It is a privilege for us to be here. It really is the event that opens up the college basketball season. It’s the one that everyone looks forward to. It’s where every player wants to play.”

Sean Sutton is in his second year at the helm of the Oklahoma State team, 1-1 coming in to the event.

“We’ve got a great challenge in front of us,” said Sutton. “Coach Brady’s teams always play extremely hard. They’ve got a great player in Tasmin Mitchell. They’ve got one of the best freshmen in Anthony Randolph. Right now we are a team that is probably one of the youngest in college basketball. We’ve got good guards who if they shoot the ball well, we will have a chance. We are anxious to see how we do against a good LSU program.”

Although he has not practiced much the last three days, it is hoped that Tasmin Mitchell can continue his streak of 70 straight starts for LSU. Mitchell has been sitting out a good deal of the practices resting a sore left ankle/heel that is hurting with tendonitis. Of course, Quintin Thornton remains probably out for the year after the surgery on his pectoral muscle and Dameon Mason, diagnosed with a viral infection on his heart muscle is on the trip but has not been cleared by doctors to practice or play.

LSU (2-0), if Mitchell can go, is expected to stay with the lineup that started against McNeese on Wednesday with Mitchell joined by Randolph at the forward with Chris Johnson at center and Terry Martin and Marcus Thornton at the guards. If there is any change or is Mitchell can’t start, it would probably be the reinsertion of Garrett Temple back into the lineup for defensive purposes.

The Tigers’ tall and lean lineup has done a good job blocking shots with 19 in the first two games, but will need to continue to work on the rebounding end; however, the bigger lineup did outrebound McNeese State after LSU was on the deficit end against the EA Sports team and Southeastern Louisiana, especially on the offensive boards.

LSU will play either Marquette or Chaminade on the second day of the tournament. The loser of the LSU-OSU game will play the Marquette-Chaminade loser at 8:30 a.m. HST (12:30 a.m. CST) in the opening game of the second day, while the winner gets the winner of the other game at 2 p.m. HST (6 p.m. CST) in the first semifinal of the day. The losers’ game will be televised by ESPNU, the semifinal winners’ bracket by ESPN.