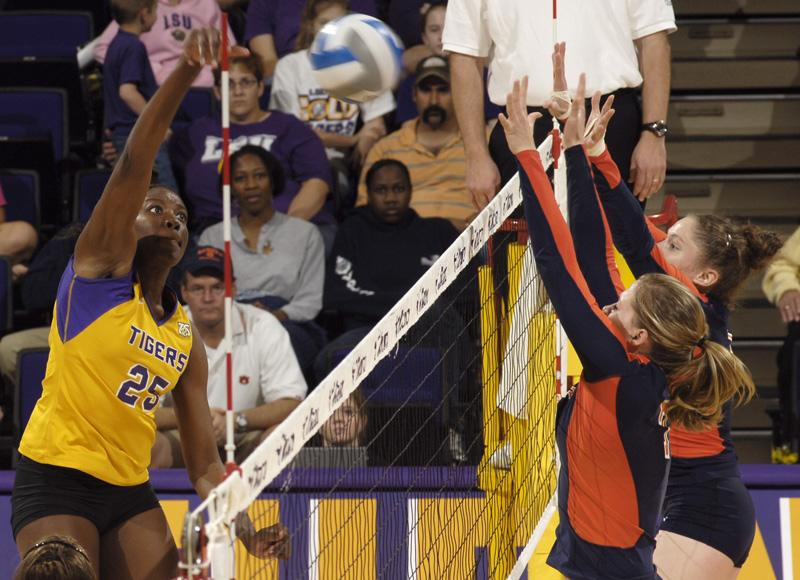 BATON ROUGE — For the second straight season, the LSU volleyball team will be the outright champions of the Southeastern Conference Western Division as the Fighting Tigers swept Auburn, 30-23, 30-28, 30-24, on Senior Day on Sunday afternoon in the Maravich Center.

With the win, LSU improved to 24-6 on the year and 15-5 in SEC play. The Fighting Tigers have now won six straight matches and will finish one game ahead of Ole Miss in the Western Division. LSU has now captured three-straight SEC West titles, sharing the 2005 championship with Arkansas before winning outright last year and this season.

“I think it was a good win and we are certainly happy to win the SEC West outright,” said LSU head coach Fran Flory. “I was really proud of the way we responded and the balance in our offense and the poise that we showed in long rallies where Auburn kept keeping the ball in play. We did a great job of staying in the court and remaining true to what our game plan was and to who and what we are. I was really proud of them. I think we grew up another step tonight and I think it was a good step for us.”

The loss concluded AU’s season as Auburn dropped to 11-20 overall and 3-17 in league play. AU will finish last in the conference standings, as the purple and gold completed the series sweep with Auburn, knocking off AU in Auburn, 3-1, before sweeping it at home, 3-0.

“You have to credit Auburn,” said Flory. “This is a team that this is their last match of the season and they played hard and they played throughout. I thought they did a great job.”

Following the match, LSU honored four-year senior Michelle Hensgens, along with manager Andrew Beyer and student trainer Rachel Zgrabik. Advancing through the program as a walk-on, Hensgens earned a scholarship prior to her final season. A key contributor on the back row throughout her career, the Morgan City native is nearing the 600 dig mark with over 200 digs this year. In addition, she is having her best season from the service line, posting 22 aces this year to give her 58 for her career. A three-time member of the SEC Academic Honor Roll, Hensgens carries a 3.4 grade point average in Kinesiology ? Human Movement Science.

Elena Martinez extended her SEC-record dig mark with a team-best 19 in the match. She leads the conference with a 5.71 digs per game average this year and has 680 digs for the year. With 34 more digs, she will enter into the top 20 in single season digs in NCAA history.

As a team, LSU was just shy of its season high in hitting efficiency. The Fighting Tigers posted 57 kills with only 11 errors for a .343 mark. Auburn became just the seventh team all season to hit over .200 against LSU, posting a .246 mark with 53 kills and 19 errors. AU led the match with 62 digs, while the purple and gold posted 55, but LSU dominated at the net, recording 11.0 blocks to only 1.0 for Auburn.

After posting a season-worst 21 service errors in their first meeting, the purple and gold recorded only six service errors, the third fewest all season. LSU also countered with five service aces for only a -1 serving mark. AU recorded seven service errors with only two aces for a -5 mark.

The first game saw 13 ties and six lead changes in a game that remained tight until the end. With the score tied at seven, LSU took the advantage, 10-7. Auburn came back to tie it up at 11 before taking the lead, 13-11. The purple and gold countered to tie it up again at 13. After three more tied scores, LSU took the lead for good, 18-17. The purple and gold then slowly pulled away before winning the first game, 30-23, on a kill by Martinez.

LSU fell behind early in the second game, 6-4, before tying it up at seven. The game was once again tight with 10 ties and five lead changes. With the score tied at 15, the purple and gold stretched their lead to four, 19-15. LSU held its largest lead of the game, 27-22, but Auburn came back with a three-point run to get within two, 27-25. AU would get no closer than two the rest of the way as the purple and gold went into the locker room with the two-game advantage, 30-28, on a kill by Washington.

In the third game, LSU took the early 11-7 lead. Auburn came back to tie it up at 13 before taking the lead. AU led by three, 16-13, and led 19-16 before the purple and gold used a 3-0 run to tie it up. With the score tied at 24, LSU took the lead for good on a kill by Angela Bensend.  The purple and gold scored the final six points of the game to take the match, 30-24, on the fourth ace of the match by Washington.

With a 13-1 record in the Maravich Center this season, the Fighting Tigers have won the most home matches since the 1992 squad went 13-2. The only home loss for LSU this season came in four games to top 10-ranked Florida as the Fighting Tigers have lost only four matches in the Maravich Center in the last three seasons, all to top 10-ranked teams, to give LSU a 30-4 mark since the start of the 2005 season.

LSU leads the overall series with Auburn, 30-11, and has won 13 straight over AU and 14 of the last 15. The last time Auburn defeated the purple and gold was in 2000. No current LSU player as ever lost to AU, with senior Hensgens posting an undefeated 8-0 mark against Auburn over her four seasons.

The Fighting Tigers will close out the season against Tulane next Saturday at 7 p.m. The Green Wave finished the regular season in second place in Conference USA and have been receiving votes in the national polls on and off during the year. Fans wearing Hawaiian shirts will receive FREE admission to the match. NCAA Tournament selections will be announced on Sunday, Nov. 25 at 7 p.m. on ESPNU. LSU will be looking for its third straight bid to the NCAA Tournament.