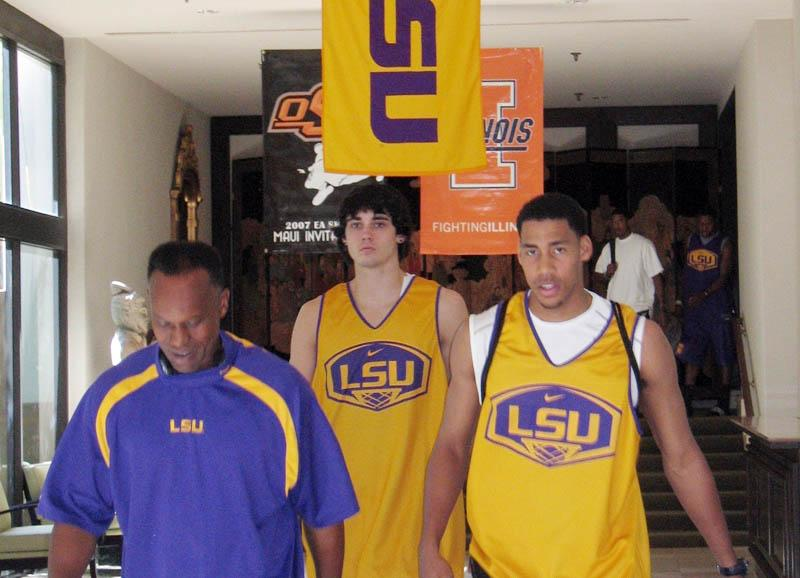 LAHAINA, Hawaii — The pace has begun to quicken amidst the beauty of the island of Maui as the LSU men’s basketball team, the first to arrive, has been joined Saturday by all the teams in the EA Sports Maui Invitational that begins on Monday.

All eight teams practiced Saturday at either the Lahainaluna High School or the Lahaina Civic Center and the teams will reverse sites on Sunday. LSU practiced for the second straight day in the high school gymnasium on Saturday and then went to a local health club to have a weight lifting session. The Tigers will practice on the competition floor at the Lahaina Civic Center on Sunday beginning at 11:30 a.m. HST (3:30 p.m. CST).

The Tigers meet Oklahoma State in the second game of the four-game Monday session at noon HST (4 p.m. CST). The game will be nationally televised on ESPN2 and broadcast on the LSU Sports Radio Network and XM Satellite Radio.

LSU Coach John Brady put his limited squad through a two-hour, 20 minute workout and it was obvious that the second practice after a day to get over the long practice was much crisper than Friday’s practice.

“We look like a MASH unit,” said LSU Coach John Brady. “All of a sudden we don’t have enough to practice. Tasmin Mitchell (left heel) hasn’t practiced in a couple of days, Dameon Mason is not cleared to practice or play (viral infection) and Quintin (Thornton) is out for the year (torn pectoral muscle), so we are down to nine healthy players. It’s made practice a little difficult, but our players have responded well. We threw a manager out there (Donald Reyes) and had 10 guys, so we got some things accomplished. We got the flight out of us (Friday) and we’ve had two pretty lengthy workouts.”

The Tigers again worked on both defensive and offensive sets both in 5-on-0 and 5-on-5 situations in preparations for Monday’s game with Oklahoma State.

“We drug a little bit (Friday), but we fought it off a little bit (Saturday) and showed a little resiliency about us,” said Brady. “We’ve just got to take care of the ball against Oklahoma State. They are going to put a lot of ball pressure on us. But is we can get the ball reversed a couple of times I think we have a chance to get it to the people we need to get it to. We’ve got to get back and rebound. But I am pleased with where we are right now.”

While obviously Quintin Thornton and Dameon Mason are definitely out, Mitchell is listed as probable for the game. He did take part in some non-team drills and was being held out primarily to hopefully be closer to full strength for the game on Monday.

“There is nothing I can do about injuries or not having enough players available to practice as we would like. That’s just something we can’t control. They things we can control I think we are handling them pretty well and we are excited about playing the game and seeing where we are.”

The Tigers attended Saturday night the first of two social functions for the teams of the EA Sports Maui Invitational, a meet and greet evening for the teams at the Sheraton Hotel on Kaanapali, just down from LSU’s headquarters hotel, the Westin. The coaches will be available at the Westin early Hawaii time for the media on Sunday (8 a.m. HST, noon CST) as all eight coaches will meet the media with ESPN’s Jay Bilas moderating.

Sunday night is the annual tip-off banquet for the event with ESPN’s Bill Raftery emceeing the event. Bilas, Raftery and Sean McDonough will call all four games on the first day of the event with the LSU-Oklahoma State game on ESPN2. Dave Barnett and Jimmy Dykes will also call games on both Tuesday and Wednesday.

In other tournament notes, Illinois was one of the last teams to arrive on the island for the tournament after trying to follow the plan of another Big 10 former visitor to the event, Michigan State. Illinois arrived mid-week in Honolulu and played on Friday night against Hawaii, rallying in the final minutes to win, 79-77, before coming to Maui.

Arizona State is the only team to come to Maui without a prep regular season contest as the Sun Devils will open the season, one of the latest to open play this year, unlike LSU, which opened the season on Nov. 12, its earliest starting date in its history.