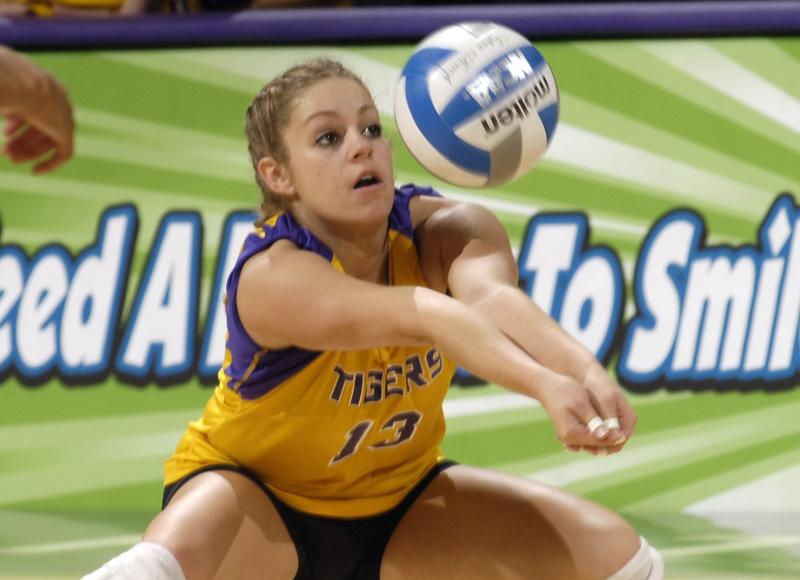 BATON ROUGE — After clinching at least a share of the Southeastern Conference Western Division championship for the third straight year, the LSU volleyball team will close out the league schedule on Sunday at 1:30 p.m. against Auburn as the Fighting Tigers host “Senior Day.”

LSU (23-6, 14-5 SEC) holds a one-game lead over Ole Miss with one league match remaining. The Fighting Tigers can clinch the outright title for the second straight year with a win on Sunday. In 2005, LSU won its first divisional title in 2005, sharing the honor with Arkansas, before winning the outright championship last season.

Auburn comes into the match riding a five-match losing streak and having lost 16 of its last 18 matches. AU is 11-19 on the year and 3-16 in conference play, putting them last overall in the league standings. Auburn’s only two wins in the last 18 matches were a five-game win over Arkansas at home and a four-game win at Tennessee.

The match will be broadcast on a tape delayed basis locally on the Pelican Sports Television in Baton Rouge on digital cable 113. The broadcast will be aired on Sunday at 5:30 p.m. and replayed again on Monday at 11 p.m. Live statistics will also be available on the official LSU athletics website, LSUsports.net.

“Auburn is one of the hardest playing teams in the SEC,” said LSU head coach Fran Flory. “They are tremendous at keeping the ball in play. They try to outwork and play with more intensity than their opponents. We need to be prepared for a tough match.”

Following the match, LSU will honor four-year senior Michelle Hensgens, along with manager Andrew Beyer and student trainer Rachel Zgrabik. Advancing through the program as a walk-on, Hensgens earned a scholarship prior to her final season. A key contributor on the back row throughout her career, the Morgan City native is nearing the 600 dig mark with over 200 digs this year. In addition, she is having her best season from the service line, posting 22 aces this year to give her 58 for her career. A three-time member of the SEC Academic Honor Roll, Hensgens carries a 3.39 grade point average in Kinesiology ? Human Movement Science.

As a team, LSU did not put up outstanding numbers offensively, hitting at a .194 clip for the match, but the purple and gold did out hit Auburn, who only posted a .135 mark for the match. In addition, LSU posted four more kills than AU, 62-58. The purple and gold almost shot themselves in the foot, committing 21 service errors for the match, including one on match point late in game four. AU returned the favor somewhat, committing 13 service errors of its own. Auburn held a slight advantage blocking, 11.5 to 11, and out dug LSU, 79-63.

“We need to do a better job of being in our system and being more efficient to be successful,” said Flory. “We have matured and are now taking the shots that are available to us and hitting them successfully when we are not in system, but we have got to work on our ball control to remain in our system more.”

For the season, LSU leads Auburn in most statistical categories, as the purple and gold hold a significant advantage in kills per game with 15.3, fifth best in the SEC, compared with 14.6. LSU also holds an advantage in hitting percentage, .211 to .194. The purple and gold are one of the best serving teams in the league, averaging 1.8 aces per game, while Auburn is slightly behind at with 1.7 aces per game. Defensively, the Tigers hold a commanding lead over the AU in blocks, averaging a league-best 3.1 blocks per game. The pair are tied in digs per game at 17.2 each.

In her first year as the starting libero, Martinez has recorded double-digit digs in every match this year, leads the SEC and 32nd in the nation with 5.70 digs per game. Against Georgia on Friday, she broke the 21-year-old SEC single season digs record and now has 661 for the year. Last weekend at Alabama, she broke the LSU record for digs in a match with 43 against Alabama, the most digs by any player in the SEC this season.

The Tigers boast a pair of dominate players up the middle as LSU has one of the most impressive duos in the league. DeGirolamo was named the Collegiate Volleyball National Player of the Week on Tuesday after leading the Tigers with a pair of 20-kill matches, the fourth and fifth of her career, and averaging a double-double. Against Mississippi State, she finished with 11 blocks, while posting nine against Alabama, both of which were match highs. DeGirolamo also hit at a .438 clip for the week, including a .529 mark against Mississippi State. Against Alabama, she tied her career high with two service aces, just her ninth and 10th of the year.

Washington and Skender both recorded their 1,000th career kills this season and are only the fifth and sixth junior to accomplish the feat. Averaging just under four kills per game, Washington is fifth in the SEC. Skender is currently third on the team in kills and needs 84 digs to become only the fifth player in LSU history to record both 1,000 career kills and 1,000 career digs.

AU has three players averaging over three kills a game on the season, led by 3.71 kills per game from Rachel Shanks. Jelena Sekulic and Jessica Glover are also posting over three kills a game at 3.35 and 3.11 respectively, while Whitney Jacob is just under three at 2.97 kills per game. Jacob leads Auburn with 1.01 blocks per game, the only AU player averaging over a block a game, and a .298 hitting percentage. Liz Crouch leads Auburn with 4.18 digs per game, followed by Sekulic and Shanks with 3.13 and 3.08 respectively.

LSU leads the overall series with Auburn, 29-11, and has won 12 straight over AU and 13 of the last 14. The last time Auburn defeated the purple and gold was in 2000. No current LSU player as ever lost to AU, with senior Michelle Hensgens posting a 7-0 mark against Auburn over her four seasons.

The Fighting Tigers will close out the season against Tulane next Saturday at 7 p.m. The Green Wave finished the regular season in second place in Conference USA and have been receiving votes in the national polls on and off during the year. NCAA Tournament selections will be announced on Sunday, Nov. 25 at 7 p.m. on ESPNU. LSU will be looking for its third straight bid to the NCAA Tournament.