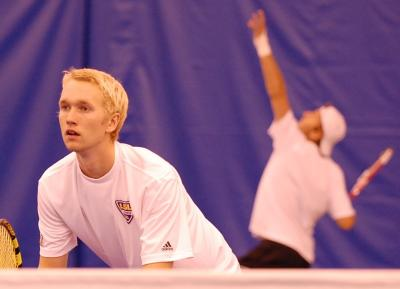 AUBURN, Ala. — Freshman Sebastian Carlsson of the LSU men’s tennis team continues to have an impressive fall campaign as he won his sixth-straight singles match Saturday morning in the Auburn Invitational at the Yarbrough Tennis Center.

LSU won six out of their 11 matches against Southeastern Conference foe Auburn and will face South Carolina’s players Sunday morning.

“We had several bright spots today,” LSU head coach Jeff Brown said. “The freshmen, Sebastian, Ryan (Lissner) and Julien (Gauthier), are really showing a lot in their singles play. James (Cluskey) has come a long way since his injury. We have been able to try some different doubles combinations and are comfortable with the teams we have put out there.”

Carlsson knocked off Terrence Nugent, 7-6, 6-4. The 6-foot freshman has won in straight sets in five matches during his six-match win streak.

Cluskey and Gauthier also picked up straight-set victories in singles. Cluskey topped Nick Maurillo, 6-3, 6-2, to put his fall record at 3-0.

Gauthier breezed past Alex Petropoulos with a 6-1, 6-3 score.

In doubles, the two SEC rivals split matches in each bracket. In bracket A1, seniors Kevin Dessauer and Colt Gaston cruised against Powel Dilaj and Petropoulos, 8-1. Cluskey and Gauthier suffered their first lost as a duo against Nugent and Alexey Tsyrenov, 8-3.

In bracket A2, Carlsson and Jan Zelezny had a grueling match against Lukas Marsoun and Monteiro. The Auburn pair held a 5-3 lead when LSU stole the momentum to win four out of the next five games to take the lead at 7-6. The SEC tandems continued their heated battle into a tiebreaker. Carlsson and Zelezny came out on top with a 7-5 score in the tiebreaker.

Martel Campbell and Lissner fell against Maurillo and Hunter Mills, 8-4.