Soccer Faces No. 14 Florida St. in NCAA Second Round 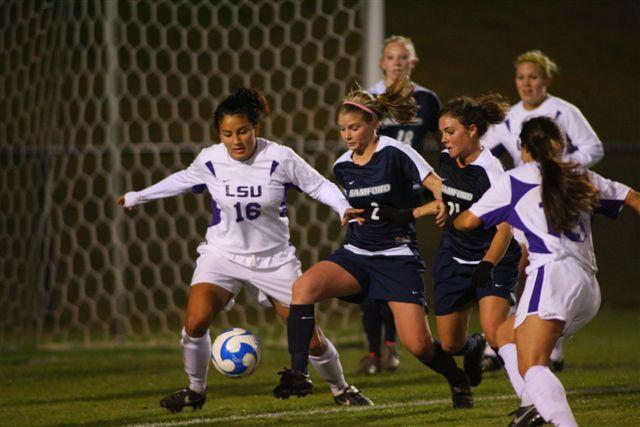 TALLAHASSEE, Fla. — The LSU soccer team faces a tough task in the second round of the NCAA Tournament as it is set to battle the 14th-ranked Florida State Seminoles on Sunday at 12:07 p.m. CT at The Seminole Soccer Complex.

The Tigers (12-4-7) shut out Samford by the score of 1-0 on Friday to earn their first ever win in the NCAA Tournament as junior Roslyn Jones scored the game-winner in double overtime.

Third-seeded Florida State (14-5-3) advanced to the second round after shutting out Kennesaw State on Friday evening by a 3-0 margin. Sunday’s match marks the fourth meeting between the two schools on the soccer pitch as the series is even at 1-1-1 all-time.

The match is scheduled for a live television broadcast by FOX Sports South. This will be LSU’s fifth match on television this season.

“We have a great challenge ahead of us tomorrow afternoon against one of the best teams in the country, but we are looking forward to that challenge,” said LSU head coach Brian Lee. “Florida State is a truly outstanding team. We’re going to have to play at our best and match their intensity when we kick it off tomorrow. We’re expecting a very tough battle.”

The Seminoles boast one of the nation’s most storied programs in recent years as they have advanced to the NCAA College Cup in three of the last four seasons. The squad has advanced past the second round of the NCAA Tournament in four of the last five seasons.

Florida State is dynamic in the attack as it features two of the nation’s premier scorers in junior midfielder Mami Yamaguchi and freshman forward Sanna Talonen.

Yamaguchi is currently the third-leading scorer in the NCAA and the top scorer in the Atlantic Coast Conference with 21 goals and 55 points in 22 matches this season. Talonen has proven to be a nice compliment as she has scored 13 goals and 31 points in her rookie season, including a hat trick in Florida State’s 3-0 win in the first round of the NCAA Tournament on Friday.

As a team, the Seminoles boast the No. 2 scoring attack in the country as they score 2.94 goals and 8.64 points per game. Their 67 goals also rank No. 1 in all of women’s college soccer.

“We’re certainly going to have our hands full defensively against Florida State,” Lee said. “They have probably the best combination of forwards that we’ve seen all year long, and they play very well together. They’re dynamic in the attack and will pose a great challenge for our back line.”

Despite Florida State’s recent success, the Tigers are looking for their second straight win in the series after defeating the 15th-ranked Seminoles by a 2-1 margin in the last meeting between the two schools on Sept. 8, 2002. This marked the first time in the brief history of the program that LSU had ever defeated a nationally-ranked opponent.

The winner of Sunday’s match will advance to the NCAA Third Round. The third round is scheduled to take place from Nov. 23-25 at campus sites yet to be determined.