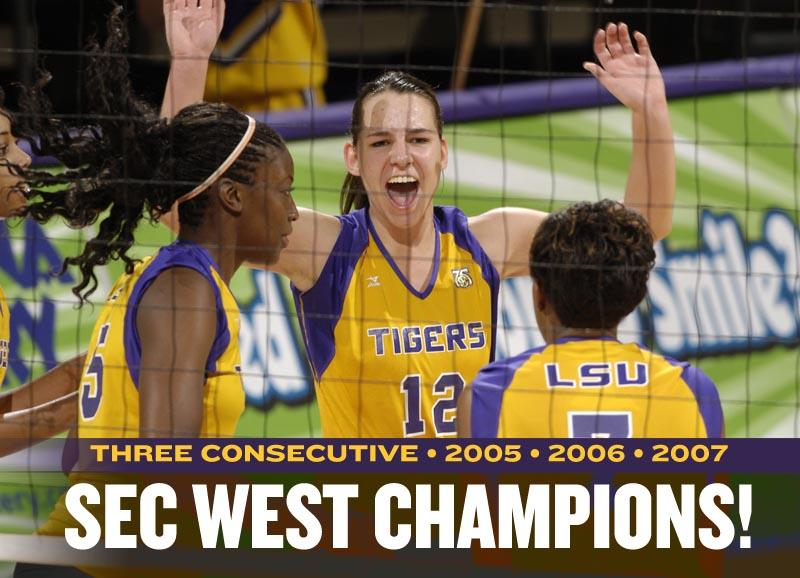 BATON ROUGE — For the third straight season, the LSU volleyball team has captured the Southeastern Conference Western Division title as the Tigers swept Georgia, 30-23, 30-17, 30-24, on Friday night in the Maravich Center.

With 25 digs in the match, which tied for the third most in a three-game match in LSU history, Elena Martinez broke the 21-year-old SEC record for digs in a season held by Shelley Gross of Georgia. Martinez, who holds 10 of the 18 top single-match dig marks in school history, now has 661 digs for the year, besting Gross’ mark of 655 set in 1985.

With the win, LSU improved to 23-6 on the season and 14-5 in conference play. The Tigers are now assured at least a share of the SEC Western Division championship, holding a one-game lead over Ole Miss with one league match remaining. In 2005, LSU won its first divisional title, sharing the honor with Arkansas, before winning the outright championship last season. Florida has already clinched the overall SEC championship for the 17th straight season.

“This was a good win,” said LSU head coach Fran Flory. “I think it was a balanced effort, but I know that we have to be a little better and a little more efficient and in system more. I think we handled the ball and killed the ball in out of system plays fairly well, but we weren’t in system in our offense very well. We need to do a better job on Sunday to be successful.”

The loss dropped the Bulldogs to 17-12 overall and 8-11 in league action. The Tigers’ win marked the second straight sweep of Georgia this season and the eighth consecutive sweep of the Bulldogs. LSU has not dropped a single game to Georgia since 2002. The Tigers are also the only team this year to earn two sweeps over the Bulldogs as Georgia has taken at least one game from every other team it has played.

As a team, LSU dominated the match statistically. The Tigers posted 18 more kills than the Bulldogs, with 49 compared to 31, as no Georgia player recorded double-figure kills. Additionally, LSU hit at a .252 clip, committing only 16 errors for the match. The Bulldogs became the ninth team the Tigers have held below .100 hitting efficiency, posting just a .060 clip for the match.

“I don’t think necessarily that we were very solid and in system because our first ball, ball control was not exactly what it needed to be,” said Flory. “But, we have showed that we have become a much more mature team offensively and we don’t try to do too much with the ball when we don’t have the opportunity. I’m really proud of that effort.”

“I’m also really proud of our defensive effort,” said Flory. “We played real hard against these guys and we blocked well and dug well.”

Kyna Washington and Marina Skender led the match with 12 kills each, followed by Lauren DeGirolamo with 10 and a .360 hitting percentage. DeGirolamo led the match with nine blocks, which tied for the eighth most total blocks in a three-game match in LSU history. In addition, her eight block assists tied for the fourth most block assists in a three gamer.

Following Martinez’ match leading 25 digs, Washington recorded 18 to give her a team-high 17th double-double of the season. Washington also led the Tigers with three aces, giving her a team-best 61 on the year. Brittney Johnson led the match with 32 aces, while posting three kills, five digs and six blocks with an ace.

“Brittney Johnson gets better every time she steps on the court and Elena Martinez is keeping us in every game with her ball control,” said Flory. “She wasn’t great passing today, but she was unbelievable playing defense and was very disciplined.”

The match started out very competitively. Georgia scored the first point before the pair went back and forth with six straight ties. With the game even at six, the Tigers went on a three-point streak to take the lead for good. LSU led by as many as seven, 18-12, before the Bulldogs got back to within one, 20-19. That sparked another Tiger run, which saw LSU stretch its lead to four, 23-19. With the Tigers leading 24-23, LSU closed out the game on a six-point run to earn the first frame, 30-23, on a kill by Skender.

The Tigers jumped out early in the second game and stretched out to a 9-3 advantage. Georgia came back to tie it up at 12 before taking its only lead of the game, 13-12. That prompted a five-point run by LSU, which included a pair of aces by Washington, to pull away, 17-13. The Tigers then ran away with the game, using a block by DeGirolamo and Washington to go into the break with the two-game advantage, 30-17.

Although the third game was the closest of the three, the Bulldogs never really threatened as LSU led from beginning to end. The Tigers began with a five-point lead, 9-4, and stretched the lead to six, 16-10. A four-point run by Georgia got it to within two, the closest it would get, before LSU once again pulled away with a three-point run of its own.  With the Tigers leading 26-22, LSU outscored the Bulldogs 4-2 to close out the sweep, 30-24.

The Tigers close out the SEC schedule at home on Sunday as LSU hosts Auburn, which was swept by Ole Miss on Friday, at 1:30 p.m. LSU will honor its lone senior, Michelle Hensgens, in a ceremony following the match. Any fan bringing a non-perishable food item to donate to the Thanksgiving Food Drive will get in FREE and the first 100 fans will receive a free LSU pot holder. The Tigers will close out the season against Tulane the following Saturday at 7 p.m. NCAA Tournament selections will be announced on Sunday, Nov. 25 at 7 p.m. on ESPNU.