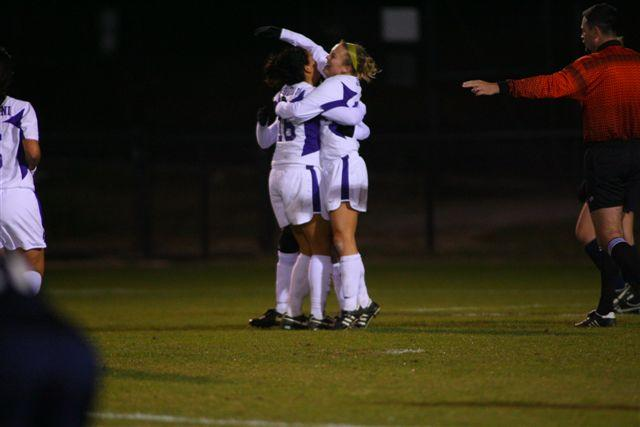 TALLAHASSEE, Fla. ? Junior Roslyn Jones punched a header into the back of the net with just 3:26 remaining in the second overtime period to send the LSU soccer team to the second round of the NCAA Tournament with a 1-0 win over Samford on Friday.

Jones was in perfect position near the top of the six-yard box after sophomore striker Rachel Yepez ripped a shot off the crossbar from the top of the penalty area. It was her seventh goal of the season and her first since scoring in a 1-1 draw with Ole Miss back on Sept. 30.

The Mandeville native just missed ending the game in identical fashion less than two minutes earlier after freshman Taryne Boudreau rifled a shot off the crossbar from 30 yards out.

“I always make sure that I frame every shot, and I was just waiting for that opportunity tonight,” Jones said. “That first shot (by Boudreau) bounced right over my head, but the second one was perfect. I stayed composed and headed it in. I knew we were going to keep shooting, and I just tried to put myself in the best possible position for a rebound.”

The Tigers (12-4-7) kept the pressure on the Bulldogs (15-5-1) throughout the match as they attempted a total of 27 shots with 10 shots on goal and three corner kicks on the night. Samford countered with just six shots and three shots on goal of their own.

Senior goalkeeper Valerie Vogler only needed to make three saves on the night to extend her school record for shutouts in a season to nine while also tying Bonnie Otillio for the top spot on the school’s all-time list as she now has 15 clean sheets in her career.

This marks the Tigers first ever win the NCAA Tournament as they are set to battle third-seeded Florida State in Sunday’s second round at 12:07 p.m. CT at The Seminole Soccer Complex. The Seminoles shut out Kennesaw State earlier in the evening by the score of 3-0.

“We knew coming in that Samford would be a difficult opponent, and they played like the well-coached team that they are,” said LSU head coach Brian Lee. “They did an outstanding job of defending throughout the match, but we just kept pushing and pushing and were able to come up with a goal in the final minutes. It sets up another difficult match for us on Sunday.”

The sides battled to a scoreless tie in the first half after struggling to find any consistency in the attacking third. The Tigers went into the halftime locker room with a 7-3 advantage in shots while each team attempted just one corner kick in the half.

Sophomore midfielder Melissa Clarke just missed giving LSU a 1-0 lead in the final minutes of the first half when she chipped the ball just over the keeper’s head and over the crossbar from eight yards out following a free kick into the box by senior defender Casey Crawford.

Clarke missed another opportunity to put the Tigers ahead in the 53rd minute of play after gathering a centering pass off the foot of Yepez and firing a shot just wide of the far post from 12 yards in the left side of the penalty area.

This is just the second time this season that the Tigers have come away with a victory after going to overtime as they are now 2-1-7 in 10 matches that have extend past regulation.

“We had a few chances earlier in the match to get a lead, but you have to credit Samford for the way they defended us all night,” Lee said. “You also have to give a lot of credit to Roslyn, Rachel and the rest of our kids for battling until the very end.

“There are now 32 teams still standing, and we look forward to the challenge of playing an outstanding Florida State team here on Sunday. They are without a doubt one of the best teams in the country again this year. It’s important that we take a day to rest and recover tomorrow and get prepared to give a max physical effort on Sunday.”

Sunday’s match against Florida State is set for a live television broadcast by Sun Sports with kickoff set for 12:07 p.m. and will be available on DirecTV Channel 632. The winner will advance to the NCAA Sweet 16 next weekend at a site yet to be determined.