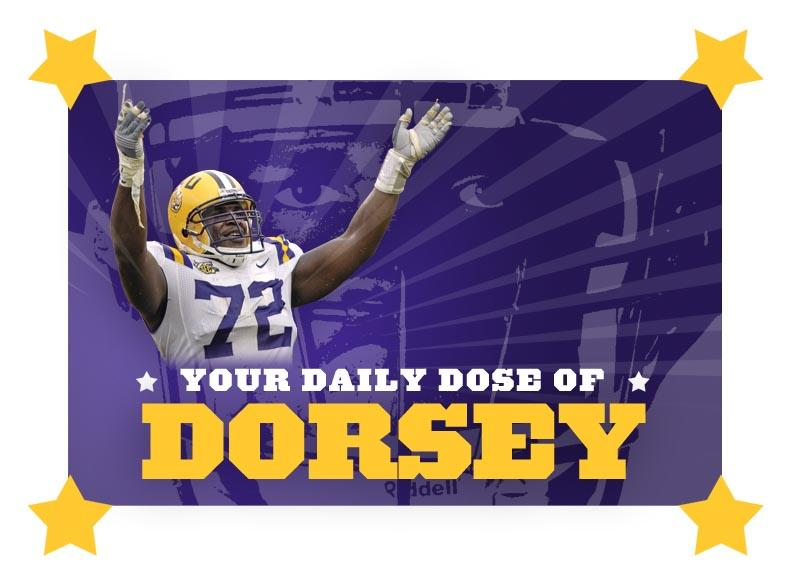 If you want to see why LSU defensive tackle Glenn Dorsey should be considered for the Heisman Trophy then tune in to CBS on Saturday (Nov. 17) at 2:30 p.m. CT and watch the top-ranked Tigers face Ole Miss.

Dorsey (wearing No. 72) will be the defensive tackle who is being blocked by two, sometimes, three players. He’s a game-changer, a game-plan changer and the difference maker for top-ranked LSU.

Through 10 games, here’s what some of the coaches who have faced Dorsey this year have said about the All-American, who decided to hold off on the NFL Draft for one year, to return to LSU for a senior season:

“I look at Dorsey and he is throwing guys around from Virginia Tech and South Carolina like they are rag dolls.”
— Bob Toledo, Tulane head coach

“The Auburn-LSU game last year (2006), that was the first game where everybody realized how dominant Glenn Dorsey was as a player. We did everything possible to block him with one, two, offensive linemen, a tight end at times, a running back. He’s just a great player in a long line of good defensive tackles I’ve seen come out over the years. He kind of reminded me a lot about Warren Sapp, the kid I coached at the University of Miami.”
— Tommy Tuberville, Auburn Head Coach

“I saw his butt going up the field more than he was going backwards. I said it several times over the headset (during the game). I said, ?why don’t we run the other way, because we’re not blocking him.’”
— Nick Saban, Alabama head coach

So, tune in Saturday, Nov. 17 at 2:30 p.m CT on CBS and see why LSU senior defensive tackle Glenn Dorsey should be the first defensive lineman to win the Heisman Trophy.