It's GameDay: No. 1 Tigers Travel to Face Rival Ole Miss 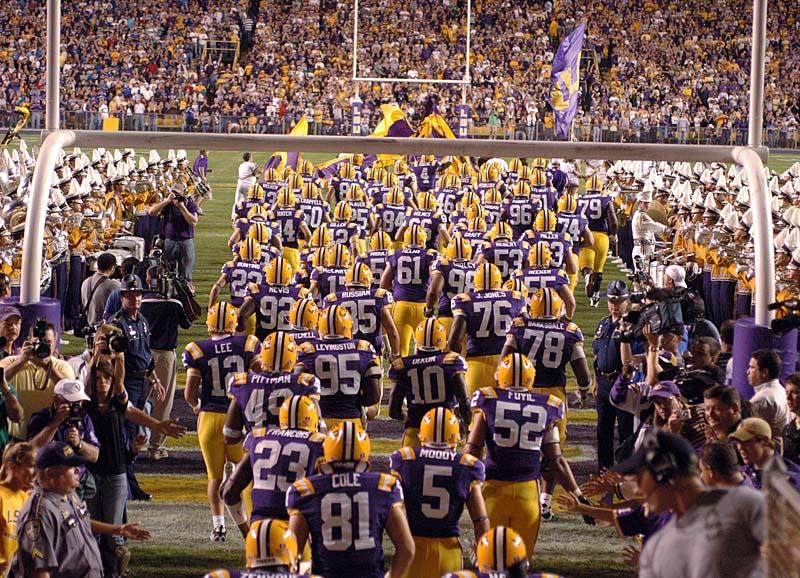 BATON ROUGE — There will be a lot on the line Saturday when top-ranked LSU travels to face Ole Miss in Oxford. The Tigers go into their clash with Ole Miss with the opportunity to not only capture the school’s first outright Southeastern Conference Western Division title, but to also strengthen its hold on then nation’s No. 1 ranking.

The Tigers and Rebels renew their annual rivalry at 2:30 p.m. on Saturday in Vaught-Hemingway Stadium. The game will be televised nationally on CBS. LSU brings a 9-1 overall mark and a 5-1 league record into the game, while the Rebels are winless in SEC action this year, sporting an 0-6 mark. Ole Miss is 3-7 overall.

LSU has won five straight and six of the last season over the Rebels, including last year’s 23-20 overtime thriller in Baton Rouge. In that game, the Tigers came from 13 points down in the fourth quarter to force overtime, where they eventually won.

Members of the Geaux Zone on LSUsports.net can listen to the broadcast live starting at 12:30 p.m. CST on Saturday. After the two-hour “LSU GameDay presented by CST” pregame show, the Voice of the Tigers Jim Hawthorne along with color analyst Doug Moreau will call the action from Bryant-Denny Stadium.

Not a Geaux Zone member? Join now to listen worldwide.

Despite Ole Miss winning only three games this year, LSU coach Les Miles expects another very competitive game with the Rebels. Four of the last five games between the teams have been decided by a total of 10 points.

“We are expecting their best shot and we don’t anticipate getting anything less than that,” LSU coach Les Miles said. “We’ve had a good week of preparation, both on the field as well as in the meeting rooms. We understand that that we are going on the road to play an SEC game and that we have to bring our best effort in order to be successful.”

If you want to see why LSU defensive tackle Glenn Dorsey should be considered for the Heisman Trophy then tune in to CBS on Saturday (Nov. 17) at 2:30 p.m. CT and watch the top-ranked Tigers face Ole Miss.

Dorsey (wearing No. 72) will be the defensive tackle who is being blocked by two, sometimes, three players. He’s a game-changer, a game-plan changer and the difference maker for top-ranked LSU.

Read more, including what opposing coaches have said about Dorsey.

Also on LSU’s side is the fact that the Tigers can now strengthen their grip on the nation’s top ranking after second-ranked Oregon dropped a stunner to unranked Arizona on Thursday night. Outside of LSU, the Ducks had more first place votes than any of the other contenders in last week’s polls.

With a win over the Rebels, the Tigers can also clinch their first outright SEC Western Division title. Prior to this season, LSU has shared the league title on six occasions, winning the tiebreaker and advancing to the league’s championship game three times ? 2001, ’03, and ’05.

With all that being said, Miles and the Tigers are still focused on one thing, and that’s playing well against the Rebels.

“I can tell you that the focus is not on 10 wins or winning the West,” Miles said. “Right now, everything we are working towards is victory on Saturday against Ole Miss. That’s the focus and the mindset of this team and that staff. The issue is playing well and enjoying victory and allowing the goals that include this opponent to stay intact.”

A victory over Ole Miss will also give the Tigers their 10th victory this season, running LSU’s streak to three consecutive years with double-figure victories. LSU won 11 games in both 2005 and 2006. A third straight season with at least 10 victories will have LSU join Alabama, Georgia Tennessee and Florida as the only teams in SEC history to accomplish that feat.

If the Tigers are going to be successful on Saturday, it’s going to take a complete effort on both sides of the ball, which includes eliminating some of the mistakes that have haunted the Tigers in recent weeks.

LSU has struggled on the road in terms of penalties, racking up 15 penalties for 91 yards against Tulane, 12 for 103 yards against Kentucky and 14 for 130 yards against Alabama. LSU only lost the Kentucky game, but they had to score late to beat Alabama.

“We’ve addressed it in practice and the team understands that we cannot continue to give our opponents additional opportunities,” Miles said. “We have to play smart and understand that when you go on the road and play in this league, you have to be at your best in all phases of the game, and that includes the mental aspect, in order to have success.”

Offensively, the Tigers bring a unit into the Ole Miss game that has been clicking on all cylinders in recent weeks, scoring 41 points against Alabama and following that with 58 against Louisiana Tech. LSU, which has scored at least 28 points in every game this year, is averaging 39 points per game and a league-leading 455 yards per contest.

Quarterback Matt Flynn has tossed three touchdowns in three straight games and has run his season totals to 1,856 passing yards and 14 touchdowns. Running back Jacob Hester continues to lead the Tigers in rushing with 706 yards and eight scores. Hester has also caught 11 passes for 87 yards and one touchdown.

The return of Early Doucet, along with the emergence of Demetrius Byrd and Terrance Toliver, has bolstered LSU’s passing game. Sophomore Brandon LaFell leads the Tigers with 39 catches for 535 yards and two scores, while Doucet has 30 receptions for 335 and four scores. Byrd, a junior college transfer in his first year with the Tigers, has 22 catches for a team-best 464 yards and four TDs.

Defensively, the Tigers continue to rely on the tone set by its defensive front, in particular defensive tackle Glenn Dorsey. As a unit, LSU is ranked among the top 10 in the nation in five categories, which includes leading the country in total defense with 236.8 yards per game. LSU is also No. 3 in rushing defense at 66.0 yards per game, No. 6 in pass defense at 170.8 yards per game and 10th in scoring at 16.7 points per contest.

Safety Craig Steltz leads the Tigers in tackles with 68, while linebacker Ali Highsmith is second on the squad with 60 stops. Dorsey, along with Kirston Pittman, lead the Tigers in both tackles for losses (11.5) and sacks (6).

After Saturday, the Tigers will have a short week to close out the regular season as they host Arkansas at 1:30 p.m. on Friday, Nov. 23.