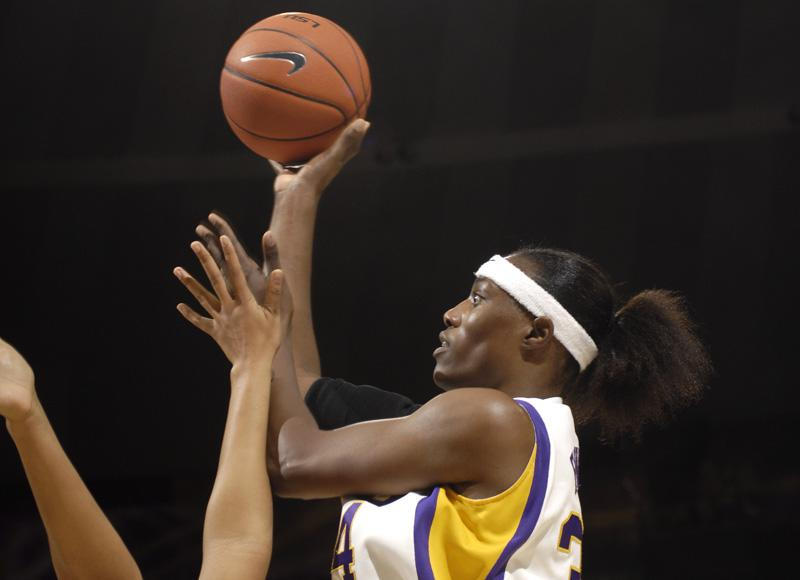 BATON ROUGE — Prior to Thursday, LSU All-American Fowles hadn’t missed a shot. She missed 10 shots against Michigan State, but poured in 25 points to lead the No. 4 Lady Tigers to a 64-41 victory over the No. 17 Spartans on Thursday night in Preseason Women’s National Invitation Tournament semifinal game in the Pete Maravich Assembly Center.

The victory moves LSU (3-0) into Preseason WNIT Championship game on Sunday at the winner of Friday night’s Maryland-Notre Dame semifinal.

“Tonight we were really ready to play,” LSU head coach Van Chancellor said. “Our focus was there and we played like it.”

The Lady Tigers scored the first 15 points of the contest, while holding Michigan State (2-1) scoreless for more than seven minutes.

“When you start out a game and you’re up 15 to zero that’s a heck of a start,” Chancellor said. “We just got better and better as the game went along defensively. At one time we only gave up 29 points in 34 minutes.”

After making her first 11 shots of the season, Fowles continued to dominate against the Spartans and their 6-9 sophomore center Allyssa DeHaan.

Fowles was 10-of-20 shooting and 5-of-5 from the free throw line to lead all scorers. She added 10 rebounds, four steals and two blocks in 28 minutes of action.

LSU guard Quianna Chaney missed her first six shots from the field, but bounced back to make her final five to score 14 points with four assists and four rebounds.

Reserve guard Courtney Davidson made 3-of-5 three pointers to lead Michigan State with 12 points. Another reserve, forward Taja Wilson, was the only other Spartan in double figures with 11. DeHaan led her team with 12 rebounds and four blocks, but managed only 4-of-11 shooting and eight points.

Michigan State’s starting lineup scored only 16 points on 6-of-24 shooting.

After Davidson’s second three-pointer cut the LSU lead to 15-6 with 10 minutes to play, the Lady Tigers responded with four straight and never allowed the lead to shrink to single digits for the duration.

Fowles scored the last six points of the half in the final two minutes to extend the LSU advantage to 32-14 at the break.

GAME NOTES
Sylvia Fowles scored at least 20 points in a game of the 28th time in her career with 25 points tonight. It is also the 93rd double figure scoring game of her career.
Fowles’ 21 first-half points tonight are the most in a half by an LSU player since Seimone Augustus scored 21 in the second-half at Texas Tech on Nov. 13, 2005.
Fowles recorded her first double double of the season and the 63rd of her career with 25 points and 10 rebounds tonight.
Quianna Chaney reached double figures for the third time this season and the 42nd time in her career with 14 points tonight.
LSU has now won 50 straight home games in the month of November. The last home loss in November came on Nov. 23, 1981 to McNeese State, 75-74.

On how the team performed tonight…
“Tonight, Sylvia did her thing and I was able to knock down a few shots. Ashley Thomas also helped us out and knocked down some of the first shots that we really needed. Someone will step up and make the plays.”

On the importance of her presence on the court…
“I made a promise to myself, my teammates and my coaches that I would stay out of foul trouble because I knew that this was a game I needed to be on the floor to play. I thought everything through and tried to out-think my opponent. I feel like I was able to do that tonight.”

On her new jump shot…
“During the summer, I picked up some new things and step off the block. I mentioned at the beginning of the season that I would be stepping off of the block and tonight I had my opportunity to do it.”