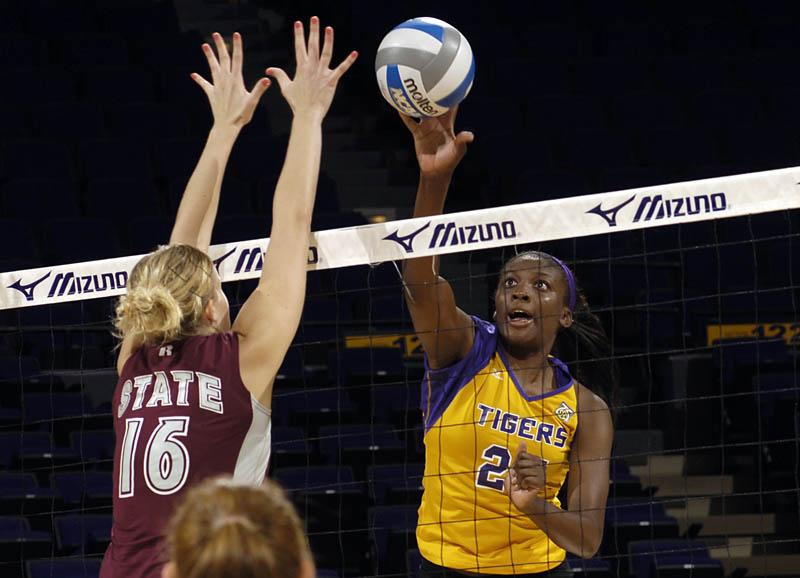 BATON ROUGE — The LSU volleyball team will be trying to capture its third straight Southeastern Conference Western Division title as the Tigers host Georgia on Friday at 7 p.m. in the Maravich Center.

Groups of 10 or more can receive FREE admission by calling the LSU promotions office at (225) 578-8960. In addition, a pregame tailgate party will take place beginning at 5:30 p.m. Live statistics will also be available on the official LSU athletics website, LSUsports.net.

“Georgia is coming in as probably the most improved team in the SEC,” said LSU head coach Fran Flory. “They have one of the best players in the conference in Maria Taylor. We know we have to be very prepared.”

A five-game loss to Arkansas on Sunday snapped a three-match winning streak for Georgia, which enters the weekend with a record of 17-11 on the year and 8-10 in SEC play. The Bulldogs are currently third in the SEC Eastern Division, nine games behind Florida and three and a half games behind Kentucky.

“They are a team that is playing with a great deal of confidence and a very aggressive, attack-oriented attitude,” said Flory. “When you are playing teams at the end of the season that are playing for position and pride, you have to be very prepared.”

In their first meeting this season, LSU became the first team all season to sweep Georgia, 30-28, 30-27, 30-22, which has subsequently been swept by Tennessee and Florida. Since their loss to the Tigers, the Bulldogs are 5-7, but have won only once on the road, that coming in four games at Auburn last Wednesday. LSU has gone 9-4 since then and is an undefeated 7-0 in the Maravich Center.

“When we played them at their place, we played very well,” said Flory. “They competed very well. We just did a few things that they couldn’t counter balance. I’m sure they are going to be very prepared. They are very well coached. We’re going to have to able to adapt from what we did last time and be better than we were last time.”

Brittnee Cooper led that first meeting with 16 kills. In addition, the sophomore middle blocker hit at a .545 clip and tied for the match high with four blocks. Angela Bensend led the match with a .556 hitting percentage, while posting 12 kills and a block. Lauren DeGirolamo also posted in double figures hitting for the Tigers with 10 kills and a .455 hitting percentage. The sophomore tied Cooper for the match high with four blocks.

Elena Martinez led the match with 16 digs, followed by 10 from Marina Skender. Kyna Washington added three service aces in the match. Washington also had three blocks and nine digs in the outing.

For the season, LSU and Georgia are evenly matched offensively, while the Tigers dominate defensively. The Tigers hold a slight advantage in kills per game with 15.2, fifth best in the SEC, compared with 14.9, seventh best; but the Bulldogs hold a slight advantage in hitting percentage, .225 to .210. LSU is one of the best serving teams in the league, averaging 1.79 aces per game, while Georgia is slightly behind at third in the league with 1.77 1.62 aces per game.

The Tigers boast a pair of dominate players up the middle as LSU has one of the most impressive duos in the league. DeGirolamo was named the Collegiate Volleyball National Player of the Week on Tuesday after leading the Tigers with a pair of 20-kill matches, the fourth and fifth of her career, and averaging a double-double. Against Mississippi State, she finished with 11 blocks, while posting nine against Alabama, both of which were match highs. DeGirolamo also hit at a .438 clip for the week, including a .529 mark against Mississippi State. Against Alabama, she tied her career high with two service aces, just her ninth and 10th of the year.

For the season, DeGirolamo ranks third in the SEC and 29th in the nation with 1.44 blocks per game and is ninth in the league hitting percentage at .329. Cooper currently ranks second in the SEC and 25th in the NCAA with 1.52 blocks per game. DeGirolamo and Cooper are the only two players from the same team ranked in the top five. Cooper also ranks second on the team and 342nd in the nation at .262.

Washington and Skender both recorded their 1,000th career kills this season and are only the fifth and sixth junior to accomplish the feat. Averaging just under four kills per game, Washington is fifth in the SEC and needs 75 kills to break into the top 10 in single-season kills in LSU history. Skender is currently third on the team in kills and needs 91 digs to become only the fifth player in LSU history to record both 1,000 career kills and 1,000 career digs.

In her first year as the starting libero, Martinez has recorded double-digit digs in every match this year, leads the SEC and 32nd in the nation with 5.63 digs per game. Against Alabama last Sunday, she broke the LSU record for digs in a match with 43 against Alabama, the most digs by any player in the SEC this season. Martinez is now only 20 digs away from breaking the SEC single-season record set by Shelly Gross of Georgia in 1986.

LSU closes out the SEC schedule at home on Sunday as the Tigers host Auburn at 1:30 p.m. LSU will honor its lone senior, Michelle Hensgens, in a ceremony following the match. Any fan bringing a non-perishable food item to donate to the Thanksgiving Food Drive will get in FREE and the first 100 fans will receive a free LSU pot holder. The Tigers will close out the season against Tulane the following Saturday at 7 p.m. NCAA Tournament selections will be announced on Sunday, Nov. 25 at 7 p.m. on ESPNU.