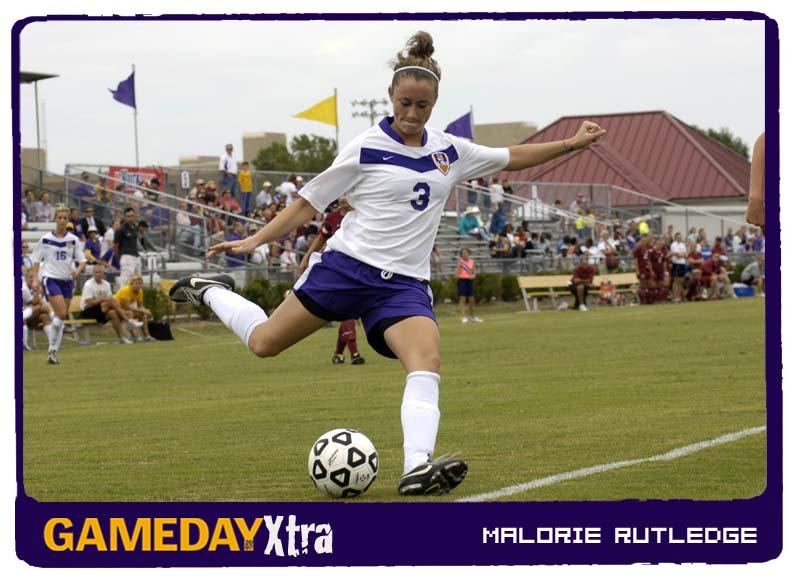 Malorie Rutledge came to LSU from East Coweta High School in Sharpsburg, Ga., where her No. 3 soccer jersey was retired during her senior season. But he ability to kick the long ball can be traced back to her days in middle school.

Rutledge was a placekicker and the first female football player at East Coweta Middle School. Agreeing to the wishes of her mother, Jane, she stopped playing football when she began high school ? for a year.

Rutledge found her way back on the gridiron midway through her sophomore year when the football coach saw her kicking on the practice field and asked her to join the team.

While Rutledge admits her teammates did a good job of protecting her from getting hurt during the course of a game, she did have one scary moment near the end of the season.

Rutledge had just kicked off when an opposing player rushed her from the side and knocked her to the ground where she lay for a few moments. Event though the play was over, someone was still running toward her.

It was her mother, who sprinted from the bleachers and through a sign that read “Fans Do Not Pass” to be by her daughter’s side. Despite clumps of grass being lodged in her helmet, Rutledge picked herself off the turf and continued to play the rest of the game.

In addition to playing soccer and football, Rutledge was a point guard on her school’s basketball team. She loved football, but playing three sports took its toll on her physically and she ended her football career after her sophomore season.

Even without football in her life, Rutledge’s schedule was still filled with both basketball and soccer. After one particular basketball practice, her coach gave her an ultimatum. She had to choose between playing soccer or basketball.

Rutledge worked her way up the ranks from local recreation leagues to Athena Soccer, which is a select program designed to develop players who perform at a higher skill level than their peers.

From there, she moved on to the Olympic Development Program where she helped her team capture the Under-19 national title. During her time in the ODP, Rutledge developed a relationship with LSU head coach Brian Lee, who was coaching the ODP team one year ahead of her group at the time.

Lee said Rutledge caught his eye because of her “unlimited” potential.

“She has a real unique ability to attack players one-on-one,” Lee said. “She was a kid who was on a big upward swing in terms of play. You don’t find too many diamonds in the rough in women’s college athletics. She was a national level player who was just getting better and better.”

The respect Rutledge had for Lee was the driving force behind her decision to attend LSU. When Rutledge sat down with her family to make her final decision, she could not think of one reason not to become a Tiger.

“I loved the atmosphere and I could not think of one drawback,” Rutledge said. “I saw the recruiting class Brian was bringing in and realized how much fun we would have playing together. I saw the potential here at LSU.”

Rutledge was a integral part of a recruiting class ranked No. 7 in the country for the Class of 2006 by Soccer Buzz Magazine. Lee even said on Signing Day in 2006 that, “This is probably the most important day in the history of LSU soccer.”

Lee’s bold statement was backed up when Rutledge and five of her classmates opened the 2007 season in the starting lineup.

Rutledge and fellow sophomores Michelle Makasini and Rachel Yepez have even earned honorable mention All-American honors for their outstanding play this season. The early success of this sensational sophomore class led the Tigers to new heights in 2007 as the team won its first SEC Western Division title and received an NCAA Tournament bid for the first time in 13 seasons.

Rutledge credits LSU’s success this season with her team’s new outlook on competing at this level of college soccer.

“We were young last year and didn’t have that much success because we didn’t know what it would take,” Rutledge said. “In college soccer, you have one chance to play a team, and if you don’t do well against them you most likely have to wait 12 months to play them again.

“Brian would always tell us to be relentless and leave it all out on the field, but we really didn’t know what that meant because in club soccer you would play the same teams three or four times a year.”

The Tigers took what Lee said to heart this season as each player wears a purple bracelet during each game with the words “Be Relentless” stitched in gold letters.

Rutledge said the team realized it had “messed up” last season, and each of her classmates dedicated herself to participating in early-morning training sessions at 6 a.m. each morning leading up to the start of the 2007 season.

“All 12 of us knew what it would take going into the summer,” Rutledge explained. “We worked extremely hard because we wanted another shot. Every single one of us deserved to win the SEC West title this year because we stayed here and worked for it. Brian said we had worked harder than any other team in college soccer.”

Rutledge said the team’s success and her individual accolades were “really cool” but that there is still more the team can accomplish.

“Seeing how we played in the SEC Tournament, I have really high expectations for our team in the NCAA Tournament,” Rutledge said. “I think we can be a Final Four team. The expectations for us are up there. We learned after last year that the next game could be our last game.”

No matter how far the Tigers go in this year’s NCAA Tournament, Rutledge still has two years in her career at LSU. But that’s not what’s on her mind heading into one of the most important games in the history of LSU soccer.

“We have three amazing seniors that we don’t want to see lose,” Rutledge said. “They have been in the back of our minds, and they have been pushing us hard lately because they don’t want to go home. They know this is their last time. We would love to win for them and go as far as we can go.”