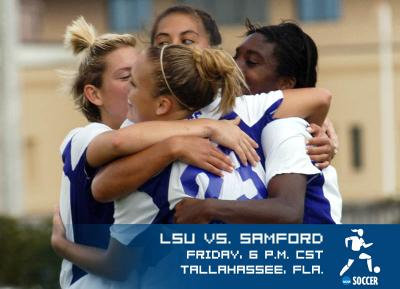 BATON ROUGE — The LSU soccer team is set to compete in the NCAA Tournament for the first time in its history and will travel to The Seminole Soccer Complex in Tallahassee, Fla., on Friday to take on Samford in the first round with kickoff set for 6 p.m. CST.

This marks the first meeting between the two schools as the Tigers (11-4-7) and the Bulldogs (15-4-1) have never faced one another on the soccer pitch.

Samford received an at-large bid into the NCAA Tournament after falling to Southeast Missouri State in penalty kicks in the Ohio Valley Conference Tournament championship on Sunday. The Bulldogs are making their second appearance in the tournament and their first since 2005.

Head coach Todd Yelton has established Samford as one of the premier programs in the OVC as the squad has captured a pair of conference titles in his six years at the helm. The Bulldogs enter the tournament unbeaten in 12 of their last 13 matches.

“We look forward to the challenge of playing a quality team like Samford in the first round on Friday night,” said LSU head coach Brian Lee. “Todd is one of my best friends in coaching, and he has done a tremendous job in building Samford into a nationally-respected program during his time there. They’ve got a great team against this year and will be a tough opponent for us.”

Although this will be the first meeting between the two teams on the soccer pitch, the Tigers enjoyed a successful trip to Birmingham, Ala., during the regular season when it competed in the 2007 Long’s Electronics Samford Classic at Bulldog Field.

The Tigers dominated a pair of NCAA Tournament teams at the Samford Classic as they crushed Memphis by the score of 7-2 on Sept. 6 and posted a convincing 4-1 win over Miami on Sept. 8.

The Bulldogs split their two matches against Miami and Memphis as they fell to the Hurricanes by a 2-1 margin on Sept. 6 before pitching a 1-0 shutout of Memphis on Sept. 8. Samford also faced NCAA Tournament teams Auburn and Indiana during its non-conference schedule.

“They obviously proved themselves during the non-conference season against some of the best teams in the country,” Lee said. “It just shows the kind of respect that Samford has earned from the NCAA that they were able to get an at-large bid into the tournament from a conference like the OVC. We’re looking forward to a great challenge when we kick it off on Friday night.”

LSU is one of eight teams making their first appearance in the NCAA Tournament this season as the Tigers join such clubs as Alabama A&M, Georgetown, Hawaii, Kennesaw State, Memphis, Monmouth and Sacramento State in this year’s field of 64.

LSU received an at-large bid after winning its first SEC Western Division title in school history and advancing to the second round of last week’s SEC Tournament as the No. 4 seed. The Tigers have played a total of 10 matches against teams in the NCAA Tournament with a 3-3-4 mark.

Makasini and Rutledge also received First-Team All-SEC selections a week ago, while fellow sophomore Chelsea Potts was named Second-Team All-SEC and freshman Taryne Boudreau was named to the SEC All-Freshman Team for their performance this season.

“This is a great opportunity for our program, and we certainly feel like we’re prepared to compete against the very best teams in the country with the schedule we’ve played this fall,” Lee said. “We’re proud of what this group of girls has accomplished this season, but reaching the NCAA Tournament is something that should be a yearly occurrence for LSU soccer.

“We have goals and aspirations that are far greater than just making it to the tournament, and that includes being a nationally-respected program that competes for national championships.”

The winner of Friday’s match between LSU and Samford will take on the winner of third-seeded Florida State and Kennesaw State in the second round on Sunday at noon. The winner of the Tallahassee regional will advance to the Sweet 16 of the NCAA Tournament next weekend.