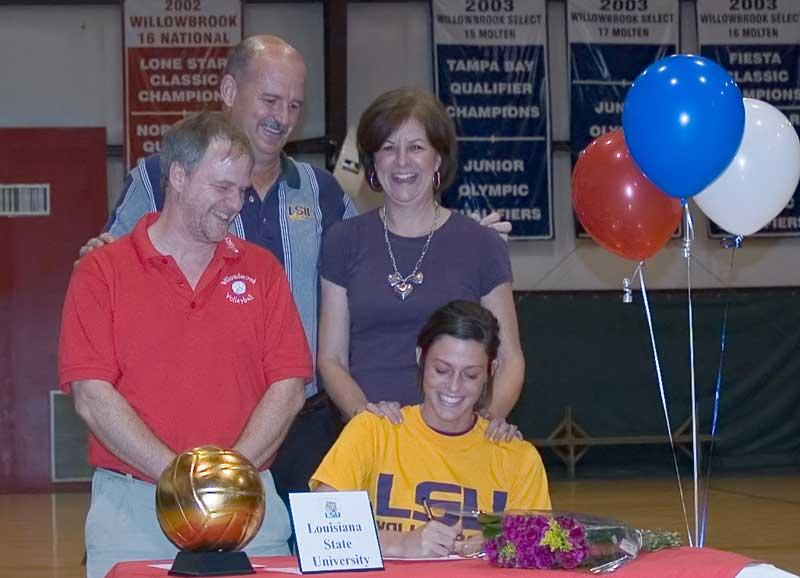 BATON ROUGE — As the LSU volleyball team approaches the end of another magnificent season with the chance for a third-straight Southeastern Conference Western Division title, the Tigers have received two National Letters of Intent during the early signing period; it was announced by head coach Fran Flory on Thursday.

“We are excited about our 2008 class as not only will they add to the level of athleticism in the program, but they are also quality individuals who will be great representatives of our program both on the court and in the classroom,” said Flory.

A 6-2 outside hitter, Williams is ranked as the No. 34 high school senior on prepvolleyball.com’s “Senior Aces” list, a list of the top 250 volleyball recruits in the Class of 2008. Last season, she was named a high school All-American after being selected a Sophomore 79 selection in 2005 as one of the top sophomores in the nation.

Volleyball Magazine said of Williams, “The fast pace of the LSU offense will benefit immediately from her agility, quickness and hard hitting attack. Williams drives teams she is on to achieve, never accepting less than a maximum effort from herself or others. She is that complete player that you want as the face of your program.”

Williams led Magnolia High School to a 34-8 record in 2007, posting a perfect 10-0 mark in District 15-5A without dropping a single game. The Lady Bulldogs were ranked as high as No. 10 nationally by Volleyball Magazine in October before falling to Lake Highlands in the Class 5A Regional semi-finals.

“Michele is an outstanding addition to our program,” said Flory. “Her athletic ability, speed and versatility will fit immediately into our team. She is a true leader who has exceptional experience on the national level. We expect her to be a true impact player in our program. We are extremely excited that she has chosen to be a Tiger.”

A two-time all-state selection by LoneStarVolleyball, Williams was named the Montgomery County Player of the Year and the District 17-5A Most Valuable Player in 2006. A three-time all-county and all-district selection, the right hander was a member of the Team USA Youth National Team A1 last summer and was a two-time Junior Olympics All-Tournament team selection while competing for the Willowbrook club team.

Equally as impressive in the classroom, Williams was a two-time member of the Academic All-District team carrying an A average. She is the daughter of James and Mary Williams and has two sisters, Alison and Jamie.

A 5-10 outside hitter from just outside of San Antonio, Waclawczyk will play at the libero position when she arrives at LSU. This season, she has helped lead Poth High School to the district championship before advancing through the state tournament as bi-district, area, regional quarterfinal and regional champions. Waclawczyk and the Pirettes will be competing for their third-straight state championship in the state semi-finals against Centerville on Thursday in San Marcos, Texas.

“Lauren is a great defender with outstanding serve receive skills,” said Flory. “She will help solidify our ball control for the next four seasons. She plays with great passion and enthusiasm and will be a tremendous addition to our program.”

A three-time all-district selection in volleyball, Waclawczyk is also a two-time all-area selection. Poth High School was selected the “Best of the Region” by the San Antonio Express News in 2006. A member of the Extec Volleyball Club, her team has advanced to the national tournament for three straight years, earning a fifth place finish at the 2007 National. Waclawczyk was named to the all-tournament team and has been the club team captain for four straight years.

In addition to being a volleyball standout, Waclawczyk is a two-time all-district selection on the basketball team and was named the Newcomer of the Year as a sophomore. The Pirettes earned the 2006 state championship and advanced to the state semi-finals in 2004 and 2005. Following Poth High School’s state championship run, Waclawczyk was named to the state all-tournament team.

Waclawczyk is also outstanding academically, having been named to the academic all-district team for three years in volleyball and twice in basketball. She is the daughter of Jeff and Leona Waclawczyk and has one brother and a sister.