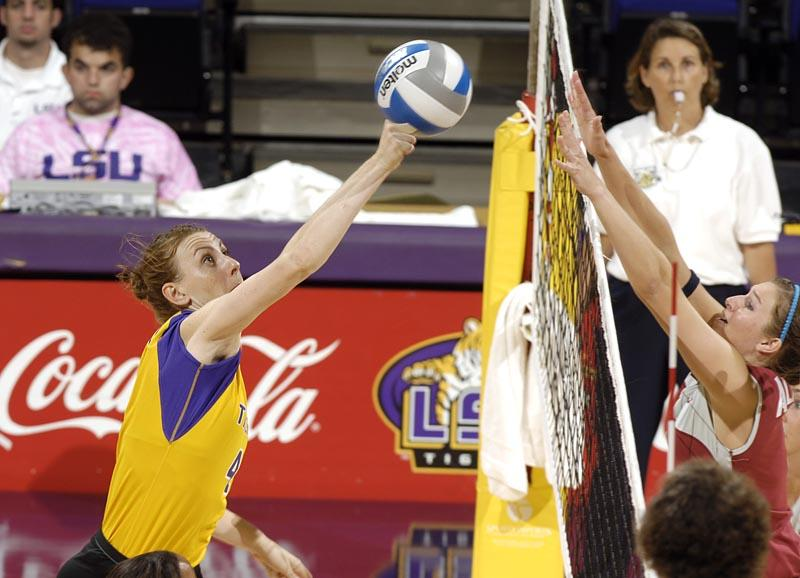 BATON ROUGE — LSU volleyball player Lauren DeGirolamo was named the Collegiate Volleyball Update National Player of the Week, it was announced by the publication on Tuesday.

The Belleville, Ill., native led the Tigers to a 2-0 record on the road in Southeastern Conference play, including the first win at Alabama since 2001. With the pair of five-game victories, LSU now controls its own destiny in the SEC Western Division race, leading Ole Miss and Alabama by one game, with two matches remaining.

Against Mississippi State, DeGirolamo finished with 11 blocks, while posting nine against Alabama, both of which were match highs. She also hit at a .529 clip against Mississippi State, while posting a .370 clip against the Crimson Tide. Against Alabama, she tied her career high with two service aces, just her ninth and 10th of the season. In only her second season, she recorded her 700th career kill and has now posted back-to-back 150-block seasons.

This is the second Collegiate Volleyball Update National Player of the Week honor for DeGirolamo, who was also honored last year on Sept. 19.

The Tigers will close out the SEC schedule at home this weekend against Georgia and Auburn. LSU will face the Bulldogs on Friday at 7 p.m. for LSU Volleyball Group Night. All groups of 10 or more will get into the match for FREE by calling the LSU promotions department at (225) 578-8960. In addition, fans are invited to come out for a pregame tailgate party. A cook-off competition will be held with prizes awarded to the winners. Volleyball trading cards will also be distributed at the match.

On Sunday against Auburn at 1:30 p.m., LSU will be playing for their third consecutive SEC Western Division title as the Tigers celebrate Senior Day and honor lone senior Michelle Hensgens following the match. The match will be televised on Pelican Sports, in Baton Rouge on digital cable channel 113. Fans bringing non-perishable food items to donate as part of the Thanksgiving Food Drive will receive FREE admission. In addition, the first 100 fans will receive free LSU pot holders just in time for the holidays.