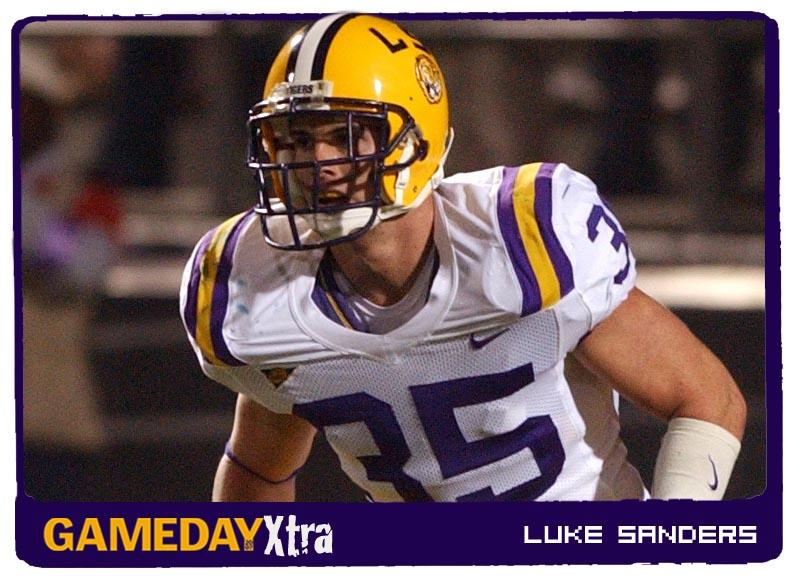 When Louisiana football fans think of top recruits coming out of high school, they often think of the powerhouse West Monroe (La.) Rebels, who continue to pump a rich pipeline of talented athletes to the college gridiron.

While growing up in West Monroe, Luke Sanders watched former Rebels become Tigers. He fell in love with the idea of following in the footsteps of Rodney Reed, Andrew Whitworth, Jason Ledoux and Brian West — all members of LSU’s 2003 national championship team.

Sanders was considered the No.1 linebacker in Louisiana after his senior season at West Monroe in 2003.  He was also rated the No. 3 outside linebacker by ESPN.com.

“It was put into my heart early on to go to LSU because those players had so much success here and I wanted to follow in their footsteps,” Sanders said.

During his four seasons at LSU, Sanders has established himself as an intense leader who keeps himself in excellent condition. The 6-5, 242-pound senior started lifting weights before most young athletes laced up their cleats.

“You must put that extra time in the weight room and work out hard to accomplish your goals, Sanders said.  “It benefits you on the field — playing linebacker you must be strong to tackle big running backs.”

Sanders’ dedication pushed him into the starting lineup at LSU last season, and he remains a vital component of one of the nation’s best defenses. He credits his father, Casey Sanders ? the strength coach at West Monroe High ? with instilling in him a relentless work ethic.

“My father has worked with me ever since I was young,” said Sanders, who bench presses over 500 pounds. “He has pushed me to work hard and be dedicated. You must work out in the weight room to reach this level. You put your time in and work hard and it shows. You realize that if you do that for a couple of years you will have your time on the field. That’s what it was like for me. My freshman and sophomore I played special teams. Now I’m able to start and it has just been a blessing.”

Sanders, a strongside linebacker, teams with junior middle linebacker Darry Beckwith and senior weakside linebacker Ali Highsmith to form one of college football’s best units. The trio has been a part of LSU’s starting lineup in each of the past two seasons.

“The big thing with a group of linebackers is having great communication, and we have that,” Sanders said. “We’ve been together for a long time.  Ali and I came in as freshmen together and I’ve played with Darry for three years.”

Sanders explained the LSU linebackers are like brothers because they’ve been together for so long. They can read one another without saying a word.

“I think we mesh well together physically and mentally to be the type of linebacking corps that we are,” Sanders said.

“Luke is a great athlete — better than people realize,” Beckwith said. “He has great lateral movement for a guy his size and he can run, too. The first summer workout I ever came to I thought I was running pretty hard and I looked up and Luke was 15 yards ahead of everybody else.”

As Sanders enters his final season as a starting LSU linebacker, there is much in store for the Southeastern Conference Academic Honor Roll member. Presently holding a 3.3 GPA, he plans to graduate in May as a management major.

“Graduating and playing football at a place like LSU is just a plus and hopefully I’ll keep working hard,” said Sanders. “Who knows, I might even continue my education and stay at LSU.”