Men's Basketball Back in Action Against McNeese St. 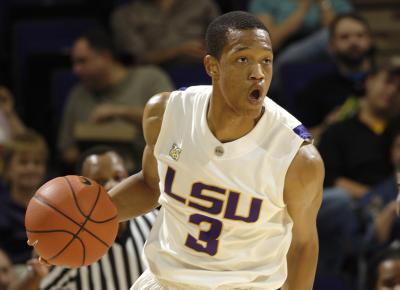 BATON ROUGE — The LSU Tigers, off a 72-62 win over Southeastern Louisiana on Monday night, now must move quickly forward to the next challenge, the McNeese State Cowboys who come to the Maravich Assembly Center for a 7 p.m. contest Wednesday night.

Tickets for the game are available online at www.LSUsports.net and through the day Wednesday at the LSU Athletics Ticket Office. Walk-up sales begin at 5:30 p.m. at the PMAC upper concourse ticket windows. Tickets are $11 for adults and $5 for youth (ages 3-12).

The game will be regionally televised on CST and the game will be available on ESPN Gameplan outside the Southeastern Conference viewing window. Because of the usual Wednesday Les Miles radio show, the game broadcast will begin in Baton Rouge only on Country Legends 107.3 FM and network affiliates around the state will be able to join the game in progress at 8 p.m.

The Cowboys come into the game with a 0-1 mark after losing at Texas A&M on Friday in their opening contest, 73-50. In that game Jarvis Bradley was the leading scorer with 12 points, while John Ford and Rorey Lawrence had 11 each. McNeese jumped to an early lead in that contest and held it for most of the first 10 minutes before A&M came back to get a 41-26 halftime advantage.

LSU will be going for its 64th consecutive victory against a Louisiana school at the Maravich Center, ironically against the team that the Tigers first started the streak against with a narrow win on Dec. 8, 1988. LSU has 15 wins over McNeese State during the streak and the John Brady-coached Tigers have posted 38 of the 63 wins in the present streak.

LSU had to battle in the game Monday night, watching Southeastern rally to take a lead in the final 10 seconds of the first half before LSU tied the game, 30-30, on a three-pointer by Marcus Thornton. LSU was able to break the game open to a comfortable margin in the second half, going on a 14-0 run with the game tied at 39-39 that gave LSU a 53-39 advantage with 11 minutes to play.

Thornton had a tremendous debut game as the junior college transfer posted 27 points, while freshman Anthony Randolph doubled up in his first college game with 19 points and 13 rebounds.

But the Tigers did struggle on the boards, being out rebounded 38-29 and 14-3 on the offensive end. It was just the 30th time in the John Brady era that the Tigers were able to win when the opposition had more rebounds.

Coach Brady hopes to reverse that trend on Wednesday and hopes for more out of his veteran players.

“We played the last exhibition game and this game really without Tasmin Mitchell,” said Brady. “He got in foul trouble, which didn’t allow him to play enough minutes. For Tasmin to play 24 minutes and only get two rebounds is not what we need out of him. Garrett (Temple) had one rebound in 29 minutes; we need him to hit the boards better. (Dameon) Mason had one rebound in 15 minutes. Chris Johnson had two rebounds in 13 minutes. That (rebounding) is my biggest concern.

“We are going to get better offensively in terms of our execution. Our inability to rebound the ball is something that we really have to pay attention to and get better at.”

Following Wednesday’s game, the Tigers leave on Thursday for the prestigious EA Sports Maui Invitational. The Tigers will take on Oklahoma State in the second of four first-round games Monday at 4 p.m. CST (Noon HST) at the Lahaina Civic Center. All the games of that tournament will be televised on the ESPN family of networks.