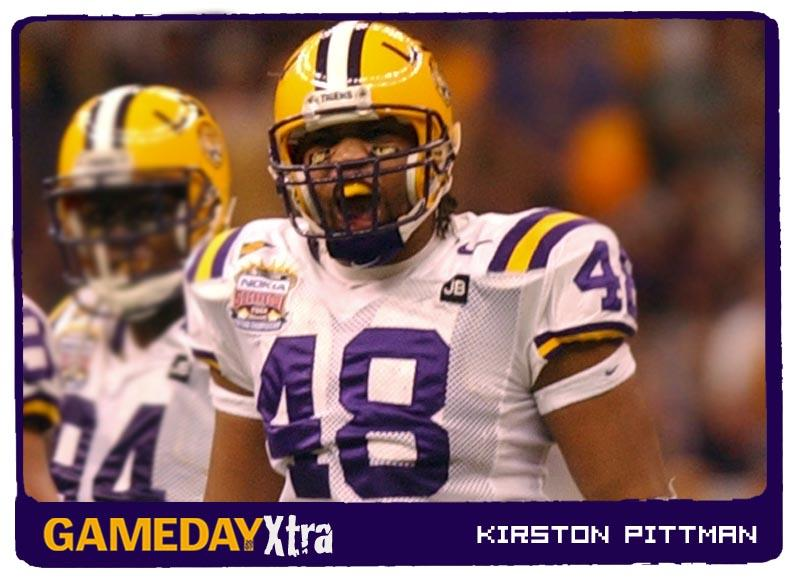 “You must be mistaken,” Miles jokingly told Pittman as he approached the reporters. “They requested Chase Pittman, not you.”

Pittman smiled and patted his leader on the back as he took a seat in front of the cameras.

Miles could have easily been taken seriously when telling Pittman he was mistaken, considering Pittman was incognito the previous 22 months due to injuries.

At that point, Miles had never seen Pittman in a game but still had trust in the fifth-year senior’s ability.

“How are you doing, big guy?” Miles said to Pittman. “Keep giving these guys (reporters) something to write about, you deserve it.”

Pittman knows better than anybody that his next play could be his last, a mentality that has helped him claim a starting spot on one of the nation’s premier defenses.

Pittman was confident entering the 2006 season after sitting out the previous season with an ankle injury. He spent his first two seasons at LSU as a third-down pass rush specialist.

With his ankle fully healed, Pittman practiced the entire ?06 spring and was determined to have a big year. However, Pittman hit another speed bump during summer conditioning sprints when he suffered a torn Achilles tendon.

The devastating injury meant another season prematurely taken away from him.

The 2006 season was a soul-searching time for Pittman. Fans around Baton Rouge and Pittman’s hometown of Garyville, La. began questioning whether he would ever see the gridiron again.

Pittman’s mom, Emma, even received a call from one of Kirston’s middle school teachers asking if her son still played for LSU.

Pittman credits his strong faith and support group for helping him get through his long sabbatical. His friends and family motivated him to work out harder and stay focused on school so he would be prepared for his return.

Whenever someone asks Pittman how he was able to get through two years of rehab, he is quick to credit the LSU training staff, particularly head trainer Jack Marucci and Senior Associate Athletic Trainers Andy Barker and Shelly Mullenix. Even though he has known the trio for five years he always addresses them with respectful salutations.

“Mr. Jack Marucci, Ms. Shelly Mullenix and Mr. Andy Barker give me their full attention when I am in the training room,” Pittman explained. “They always told me ?You are going to be back.’ I really appreciate everything they have done for me. Besides being trainers they were always good people. Caring for me and asking me good questions. They told me how much they appreciated me fighting through it.”

Pittman entered the 2007 season with cautious expectations. He still had a number of goals he wanted to accomplish but would sometimes wonder if he could reach those goals after coming off of two serious injuries.

Pittman put himself through the torture of another fall camp trying to discredit what the outsiders were saying about him, that he was done.

In a preseason scrimmage, Pittman collected five tackles, three sacks and a pass deflection. It was a nice showing, but not enough. Pittman wanted to prove his worth in a real game. For everybody to see, especially those who doubted he still represented the purple and gold.

Pittman got his chance in LSU’s first home game against ninth-ranked Virginia Tech.

“It was amazing running out of the tunnel (against Virginia Tech) because I hadn’t done it in two years,” Pittman explained. “I went straight to the bench to try and focus on the game. The atmosphere was bananas. I just tried to grasp the moment. I got caught up in the crowd and the noise. Everybody had such good energy.”

Pittman claimed eight tackles to help pace LSU’s dominating defensive performance that limited Virginia Tech to 149 yards on offense in a 48-7 win. His efforts led him to SEC Defensive Lineman of the Week honors.

Pittman’s resiliency has been tested again and again. The fifth-year senior knows his LSU career can end the next snap he takes, but he isn’t worried about that. He is too busy enjoying the moment. His determination and the number of hours he spent under the florescent lights of the training room have put him back under the lights of Tiger Stadium.