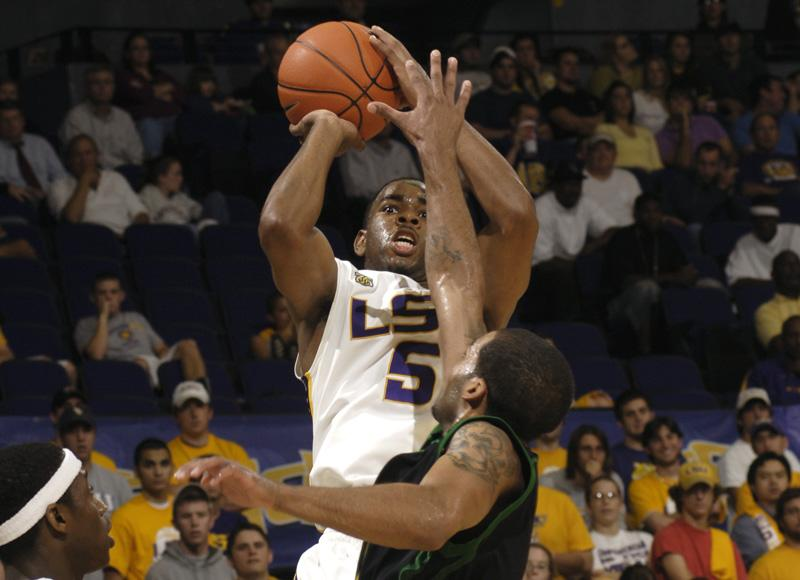 BATON ROUGE — It took some work by the LSU men’s basketball team, but the Tigers did what they needed to do to extend their home court winning streak over Louisiana schools to 63 games Monday night in a season opening 72-62 win over Southeastern Louisiana at the Pete Maravich Assembly Center.

The streak, dating back to its start on Dec. 8, 1988, goes right back on the line Wednesday night against the team that the streak started against, McNeese State. The Tigers and Cowboys meet at the Maravich Center at 7 p.m. and tickets for the game are available online at www.LSUsports.net and at the LSU Athletics Ticket Office.

Junior college transfer Marcus Thornton and freshman Anthony Randolph combined for 46 points to lead the Tigers to the 11th opening night victory in as many years for LSU Coach John Brady.

Southeastern Louisiana stayed close to LSU through the game’s first 25 minutes until a 3-pointer by Thornton, with 15:14 remaining, gave the Tigers a 42-39 lead. That basket started a string of 14 consecutive points for LSU.

Following Thornton’s long-range shot, Randolph made three straight field goals. A basket by freshman Bo Spencer and a three-point play by Thornton closed the spurt which left the Tigers ahead 53-39.

The Lions got no closer than seven points.

Patrick Sullivan had a double-double for the Lions with 10 points and 14 rebounds. Warrell Span led Southeastern with 14 points while Tavaris Nance and Dekyron Nicks each had 11 points. The Lions shot 39.7 percent from the floor (25-of-63), while hitting just 4-of-19 three point shots and 8-of-14 from the free throw line.

However, the Lions did take advantage of a weakness that Coach Brady had been trying to work against, the rebound, as the Lions out rebounded the Tigers, 38-29, and 14-3 on the offensive glass.

“In the first half, what I was concerned with the most was our inability to rebound the ball. They beat us 26-to-15 on the boards and they had 11 offensive rebounds,” said Brady. “Our initial defense was not bad. They were 12-of-37 at 32.4 percent but their 11 offensive rebounds made the game where it was. In the second half, we only gave up three offensive rebounds and had three turnovers. That was the difference in the game.”

Trailing since the game’s start, Southeastern Louisiana took a 29-27 lead on a basket by Nance with 30 seconds remaining in the half. After a technical foul against LSU’s John Brady for being out of the coaching box, Nicks made one foul shot to cap a 10-0 Lions run.

The Tigers, whose biggest first-half lead was 12 points, tied the score at the end of the first half on a three-pointer by Thornton.

For the second straight game (including the last exhibition) junior Tasmin Mitchell was saddled with early foul trouble and limited to just six points in 24 minutes.

“Obviously, we need to get better and we will be better,” said Brady. “I was proud of our team in the second half for executing better, making some stops and getting some rebounds. We gave up way too many offensive rebounds, particularly in the first half, and we didn’t get enough.”

Opening statement…
“In the first half, what I was concerned with the most was our inability to rebound the ball. They beat us 26 to15 on the boards and they had 11 offensive rebounds. Our initial defense was not bad. They were 12 of 37 at 32.4 percent but their 11 offensive rebounds made the game where it was. In the second half, we only gave up three offensive rebounds and had three turnovers. That was the difference in the game.”

“We played the last exhibition game and this game really without Tasmin Mitchell. He got in foul trouble, which didn’t allow him to play enough minutes. For Tasmin to play 24 minutes and only get two rebounds is not what we need out of him. Garrett (Temple) had one rebound in 29 minutes; we need him to hit the boards better. (Dameon) Mason had one rebound in 15 minutes. Chris Johnson had two rebounds in 13 minutes. That (rebounding) is my biggest concern.”

“We are going to get better offensively in terms of our execution. Our inability to rebound the ball is something that we really have to pay attention to and get better at. We got to the foul line a decent number of times. I said Anthony Randolph is going to be a nice freshman in this league and that is relevant with the talent that he has. Macus Thornton is going to make baskets for us. I am glad we signed those two guys. We need more from Tasmin (Mitchell) and Terry (Martin.) I have to figure out who to substitute and who plays better together. That is one thing I need to come to grips with before we face somebody that is more athletic.”

“I know the coach at Southeastern (Jim Yarbrough) is a good coach. He runs good stuff and they are a discipline team. They are put together pretty well and don’t have bad athletes. Obviously we need to get better and we will get better. I was proud of our team in the second half for executing better, making some stops and getting some rebounds. We gave up way too many offensive rebounds, particularly in the first half, and we didn’t get enough.”

On finally starting his career at LSU…
“It took all the tension away from me. I tried to give my team a chance to win the game.”

On if he was surprised that plenty of plays were called for him in his first game…
“I was surprised. I just tried to make sure I got in the right position and made the play happen so we could expand the lead.”

On if there’s any reason for him to be shy when he was shooting so well…
“Not really. I’m just trying to help my team win.”

On what he learned about Division I basketball…
“It’s a lot tougher. The opponents are a lot stronger. In junior college they’re strong, but they’re not as athletic as Division I players. I just try to practice hard every day and hit the weight room hard to keep myself strong to prepare for these Division I teams.”

On how he was able to score so well in his first game…
“Coach just told me to let the game come to me, and that’s what I tried to do.”

On how the team played…
“In the first half we came out and played without energy. Southeastern had 11 offensive rebounds in the first half and I think a team like that shouldn’t be able to get that. We’ve got to step that up and get better on that every game.”

On what LSU needs to do to improve…
“We need to get focused and concentrate on what we need to do. It’s going to come with time. We’re learning and we’re somewhat of a young team.”

On if he was nervous before his first collegiate game…
“Oh yeah, I almost threw up before we came out, but after a while it went away. I just have to come out there and play.”

On how his team hung in the entire game …
“I think it was within our grasp. Our goal really wasn’t to come in here and prove some emotional point. It was just to come in and play our second ballgame of the year, and it just happened to be against a very talented opponent, an SEC opponent. I was disappointed strictly from a coaching standpoint that we didn’t get the benefit of some of the execution of our plays and finishing around the basket, but I’m sure their (LSU) length and quickness bothered us a little bit.

“I thought we could have gone into halftime with a lead even though we had been in a deficit most of the half, and you knew they were going to make a second half run and it would have been nice to have a little bit of a working cushion. It wasn’t to be. They got away, but our guys continued to fight. We showed the opportunities to maybe get back in the game, but it’s awfully hard to do on the road. And it’s awfully hard to do with somebody who has such talent like an LSU.”

On LSU’s defense …
“(LSU) did a great job keying on Kevyn Green. I think that was big focal point for them. He kind of slowed down a bit, but he kept trying to do some things for us. I thought we got some great contributions too, maybe not enough, but we got four other guys in double-digit scoring. Jeremy Dunbar gave us five (points) off the bench, but you can see right now we are very young. When we come off the bench we may hustle and make a spurt, but we’re going to give the other team some opportunities. That’s something we have got to do a better job of. We’ve got to hang on to the basketball so that we can get better opportunities each time down. We get a great rebound, and Daryl Arnold throws a balloon of a pass in the first half. Those are the kind of things we’re living with right now, trying to grow some of these young guys.

“We’re going to have to play off the bench, trying to grow them up and season them a little bit. We’re still not at full strength. We don’t know if we’ll have Antonio Pope back or not. He’s a big body and certainly would have helped tonight. Chris Cyprian will be back in about three and a half more weeks, and we’ll certainly get a little more firepower. It will make it a little more difficult for teams to key on Kevyn (Green) when we have Chris Cyprian back in the lineup, but for now we’re going to have to find ways to get him (Green) some shots. He had some shots but seemed awfully fatigued because he had to work so hard, and when he did get them he didn’t quite have the zip that he’s had in the last couple of games.”