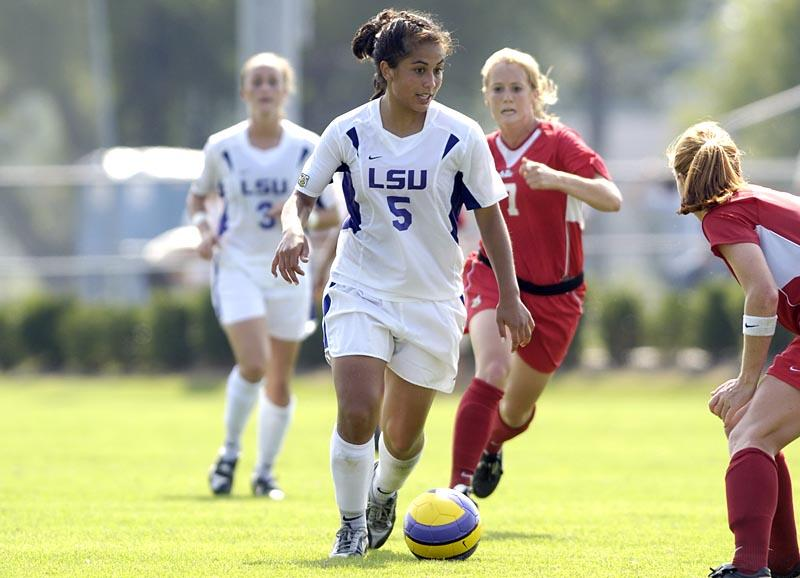 BATON ROUGE — In what has already been a historic season for the LSU soccer program, the Tigers will now compete in the NCAA Tournament for the first time in 13 seasons after receiving an at-large bid from the selection committee Monday evening.

The Tigers are one of eight teams making their first appearance, joining such clubs as Alabama A&M, Georgetown, Hawaii, Kennesaw State, Memphis, Monmouth and Sacramento State.

LSU has tested itself against one of the nation’s toughest schedules as it boasts a 3-3-4 mark against teams in the NCAA Tournament, including wins over Memphis, Miami and Tennessee and draws with Auburn, Georgia, South Carolina and Texas.

“This is a great day for our program, and we certainly feel like we’re prepared to compete against the very best teams in the country with the schedule we’ve played this fall,” said LSU head coach Brian Lee. “Playing teams like Texas, Memphis and Miami in the non-conference in addition to a difficult SEC schedule has us ready for this weekend.”

Samford received an at-large bid after falling to Southeast Missouri State in penalty kicks in the Ohio Valley Conference Tournament championship on Sunday. The Bulldogs will compete in the NCAA Tournament for the second time as they are unbeaten in 12 of their last 13 matches.

The sides will battle at The Seminole Soccer Complex on the campus of Florida State University on Friday night. The Tigers have never faced the Bulldogs on the soccer pitch in their history.

“Todd Yelton is one of my best friends in the coaching profession, and he has done a tremendous job of building Samford into a nationally respected program in his six years there,” Lee said. “For them to get an at-large bid says a lot about the strength of the Ohio Valley Conference. They will present our club with a great challenge in the opening round.”

The winner of the match will face the winner of third-seeded Florida State and Kennesaw State in the Round of 32 on Sunday. The champion of the Tallahassee regional will advance to the Sweet 16 next weekend at a campus site yet to be determined. Game times are subject to change.

The Tigers have enjoyed great success in the third season under Lee’s direction as they captured their first ever SEC Western Division championship earlier this month before advancing to the semifinal round of last week’s SEC Tournament in Orange Beach, Ala.

“We’re certainly proud of what this group of girls has accomplished this season, but reaching the NCAA Tournament is something that should be a yearly occurrence for LSU soccer,” Lee said. “We have goals and aspirations that are far greater than just making it to the tournament, and that includes being a nationally-respected program that competes for national championships.”

The 2007 NCAA Women’s College Cup is set to return to the Aggie Soccer Stadium in College Station, Texas, for the second time in three years as two national semifinal matches are slated for Dec. 7 followed by the national championship match on Dec. 9.

On her reaction when “LSU” popped up on the screen…
“I’ve watched so many other sports do this, and to be a part of this and it be my team feels unbelievable right now. We’ve thought about what it would be like for four years, that’s we’ve been working for that since Brian came in three years ago. That’s all we’ve really talked about. To see our name on ESPN is something that was overwhelming and exciting for all of us.”

On the hard work that the team has put in over the last year to earn an NCAA bid…
“At the end of our season last year, it wasn’t exactly what we wanted. Our season was over at this time a year ago, and we were running in the morning and already working toward this year. I feel like we’ve been working harder than everybody else in the country. I think we can be confident about that. It wasn’t fun at all when we started a year ago, but to still be practicing right now is proof that all of our hard work has paid off. We’ve done it together as a team and everybody has put in the work to achieve this. It feels good because it’s paying off.”

On making the NCAA Tournament…
“It’s really satisfying, especially being here for four years and finally getting a chance to go to the postseason. This is something we’ve worked for as a team since the end of last season. We’ve put in a lot of hard work for this, and we deserve it.”

On the change in the program since Brian Lee took over as head coach three years ago…
“We’ve improved each year that I’ve been here, but definitely after Brian took over you could see a major change taking place with this program. We’ve changed in a lot of ways over the last three years. We’re playing with a new enthusiasm and attitude, and the results on and off the field have been unbelievable with the recruits he’s brought in. We’ve definitely gotten better as a team, it’s satisfying to see that on the field.”

On the turnaround the program has experienced over the last year…
“I think the biggest turnaround came at the end of last year. We weren’t happy with the way the season ended, and Brian has been telling us all year that 11 months of hard work is going to pay off. Everyone really started to buy into that and started work to achieve that goal after seeing how not fun losing can be. The turnaround really started to take place exactly a year ago, and our hard work has really paid off. Now, we’ve got to get back to work to make sure our season lasts as long as it can.”

On rebounding from a disappointing end to the 2006 season…
“Last year was kind of a crazy year not to make the tournament (SEC Tournament) considering how we played in conference. That was a big disappointment for all of us, but we decided not to think about last year too much. We knew we had to work that much harder to make sure it didn’t happen again. It didn’t, and now we have a chance to play another week or so.”

On her collegiate career continuing into the NCAA Tournament…
“I’m excited that we get a chance to play some more. Obviously, our season was over at this time last year. It’s nice for each of us (three seniors) to end our careers on a good note, but the three of us know that it’s do or die from here on out. We’re just trying to make sure our next game is not our last game. We want to take this as far as we can.”