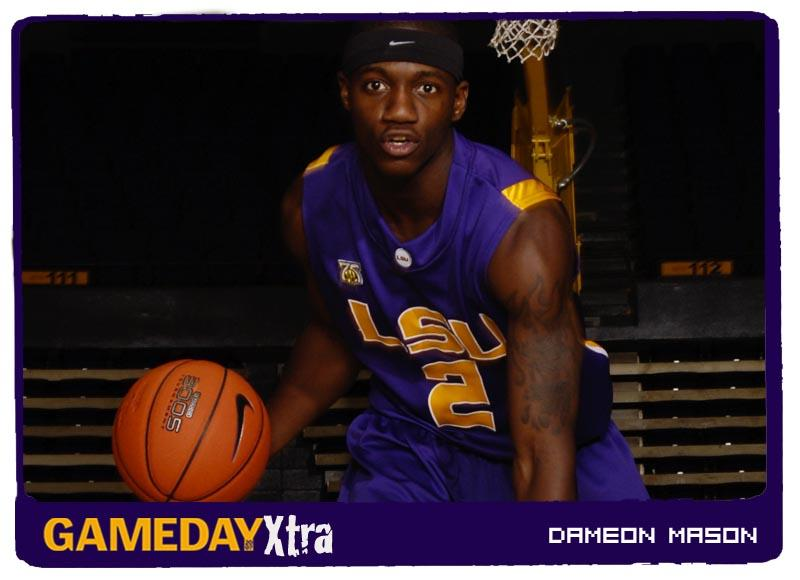 He doesn’t dwell on national rankings or recognition.

He’s not concerned about what the basketball gods have in store for him after this season.

The only thing Dameon Mason cares about is becoming a better basketball player now and helping the LSU Tigers overcome the underdog status that they seem to thrive in.

“We are going to catch a lot of people by surprise,” explained Mason. “Size wise, we aren’t the biggest team, but we have a lot of shooters and a lot of guys who are extremely versatile.”

Versatile is the perfect way to describe Mason.

Standing at 6-6, Mason would be considered a guard by most basketball standards. However, the lack of big bodies on this year’s squad puts Mason in the position of playing power forward.

It’s not something he is worried about.

“My athletic ability will help me in the post,” said Mason. “I’ve played there my entire career before college so I still have a nice repertoire down there.”

Over the summer, Mason went home to Chicago to work on becoming stronger in case the coaching staff asked him to bang with the big guys down low this season. He played in a pro-am league that featured NBA stars like the Phoenix Suns’ Shawn Marion. He enlisted a personal trainer to help him add strength by means other than lifting weights.

“I did some running in the sand,” stated Mason. “My trainer at home had me use some stretch bands that I ran with. I wanted this stuff to help me with my explosiveness and speed.”

Mason even went as far as participating in yoga classes as a way to add muscle to his frame.

“I really want someone to teach me yoga down here,” confessed Mason. “It really works the abdominal muscles which is great because those muscles stabilize the rest of your body.”

Before transferring to LSU from Marquette University, he used an array of outside shots and lane slashing moves to average 10 points a game over two seasons. He could have sat back and brushed off all that has been asked of him since he has come to LSU. But that just isn’t the kind of person Mason is.

“Even though he is outweighed by 40 or 50 pounds by the players he has to play against, he is determined to defeat his opponent,” explained assistant coach John Treloar.
“The unselfishness, the selflessness and the team first attitude are all qualities he possesses.”

Treloar has worked tirelessly with Mason during film sessions. He wants Mason to be able to read situations that he will be able to attack come game time.

“The thing I try to do with him is to just teach him how to play under control and to read situations,” explained Treloar.

Some players let instructions go in one ear and out of the other. Mason is not one of them. Treloar describes him as having “sponge-like” abilities.

“He’s one of those kinds of people who just soak up material and the lesson you try to get to him, and then turns around and carries it out on the floor,” said Treloar. “I think he’s going to be a great contributor to this team’s success.”

“There are a lot of little things that I can get away with having the athletic ability I have,” confessed Mason. “But he is helping me become skilled like all of the other guys.”

He frequently mentions the play of his teammates. One of the main reasons he transferred here was that he saw the talent this team has.

“Tyrus Thomas and Glen Davis were here,” said Mason. “Tasmin Mitchell was coming. We had, and still have, some really good guards.”

With Thomas and Davis gone, the team is in the hands of the upperclassmen like Mitchell, Garrett Temple, Terry Martin and Mason, who is the only senior on this season’s team. Being an upperclassman means having leadership capabilities.

“I don’t really talk a whole lot,” said Mason. “I’ll talk when I need to, but I lead more by example. I really don’t feel like the oldest guy, so I stay quiet.”

“His teammates see that he has to guard much bigger guys,” said Treloar. “They see the battle he puts up in there. It’s not an easy task.”

The Tigers have a chance to showcase their skills on a national stage this season. They play in a handful of nationally televised games, including the Pizza Hut Big East/SEC Invitational and the EA Sports Maui Invitational. If the Tigers win their first game against Oklahoma State in Hawaii, there is a chance that Mason and the Tigers will face his old team. He’s not dwelling on that possibility.

“Bottom line is that it is a basketball game,” said Mason. “Playing against a big time program in Marquette is good. We just want to show people what we can do.”

And that’s just what Mason plans on doing all season long. He wants to show how his athletic prowess and his newfound skills will help the Tigers overcome the odds throughout the season. He might not fill the box score with statistics game in and game out. He probably won’t play his natural position out on the wing.

Luckily for the Tigers, Mason doesn’t really care about scoring, who he has to guard or gaining national recognition. As long as he gets to help his team win, he’ll be completely content.