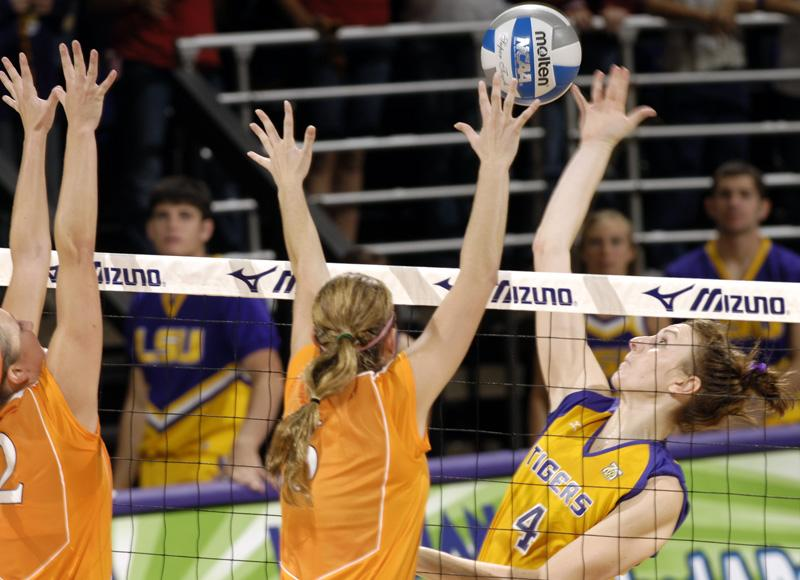 With the win, the Tigers took over sole possession of first place in the SEC West, breaking a three-way tie after a loss by Ole Miss at Mississippi State. The loss dropped the Crimson Tide to 15-12 on the year and 12-6 in conference play, putting Alabama in a tie for second in the SEC West with the Rebels. The loss was also the first for the Crimson Tide in the CAVE against the Tigers since 2001, a streak of six straight matches. LSU also sweeps the season series with Alabama since 1998 after a pair of five-game wins.

“This was a gritty performance in an environment where we have not been successful in a really long time,” said LSU head coach Fran Flory. “This is a team that at the end is a team that is still improving and still getting better. Every time we step out on the court, we get a little bit better. From where we were three weeks ago to where we are today, we are a completely different team. That’s a tribute to the work ethic and their recommitment to the season and their goals for this season. What a great win.”

LSU now controls its own destiny with a 22-6 overall record and 13-5 mark in league play with only two conference matches remaining. If the Tigers can win both matches next weekend against Georgia and Auburn, LSU will claim its third-straight SEC West title.

“We now have the opportunity to finish it off with an SEC West championship on our home court next weekend,” said Flory. “We know we have some tough matches, but we also feel very comfortable at home.”

As a team, LSU dominated Alabama in almost every statistical category, which made the match seem lopsided and not the hotly contested five-game epic it was. The Tigers out killed the Crimson Tide by nearly 14, 81-67, while the pair posted even hitting percentages at .189. In addition to out digging Alabama, 107-91, LSU posted 12 blocks while the Crimson Tide had 11. With 107 digs, the Tigers tied for the eighth most digs in a five-game match in school history.

In the first game, the pair came out and traded points early one. With LSU leading 8-7, the Tigers scored four of the next seven to stretch their lead to 12-9. LSU pushed its lead to as many as seven, 22-15. Alabama got as close as four, 26-22, before the Tigers took control and closed out the game, 30-23.

After hitting .450 with 24 kills and only six errors in the first game, LSU had trouble with efficiency in the second game, posting just a .111 clip with 14 kills and nine errors. The Crimson Tide picked up their serving and the Tigers had trouble finding a rhythm, which limited their effectiveness. LSU fell behind 10-5 and could not recover. With Alabama leading 20-16, the Crimson Tide scored five straight to pull ahead by nine. Alabama went on to even the match going into the break, 30-21.

The Tigers really had their shot in game three and let it slip away. After fighting back from a 10-4 deficit and after trailing 17-14, LSU tied it up at 22 on a five-point run that gave the Tigers their first lead of the game, 25-22. LSU got to game point, 29-24, but the Crimson Tide scored six straight points to tie it up at 29. After a kill by the Tigers gave them their sixth game point, LSU could not take advantage once again as the Tigers hit the ball into the net. Alabama then scored back-to-back points on errors by LSU that gave it the two-games to one lead, 32-30.

The fourth game played out in much the same way as the third, with the Tigers falling behind early, before rallying back to take the lead. With LSU trailing, 11-10, the Tigers scored five-straight to pull ahead, 15-11. The Crimson Tide countered with a five-point run of its own to take the lead again, 16-15. After six more tied scores, LSU took the lead for good, 23-22 and sent it to game point, 29-25. Alabama then rallied back with three-straight to get within one, but this time the Tigers took care of business and DeGirolamo closed it out with her 20th kill, 30-28.

“I couldn’t be prouder of this group,” said Flory. “With our backs against the wall, we were missing shots by a foot, but that were really close but we then found a confidence level that we have not had recently and truly began to believe in ourselves. In game five we came through with only two hitting errors, which is a huge improvement from where we were prior to this weekend.”

After falling behind, 3-1, LSU went on a six-point run to pull ahead by four, 7-3, and the Tigers never looked back. Alabama never got closer than three the rest of the way as LSU earned the hard fought win, 15-10, on a kill by DeGirolamo.

LSU holds a slight advantage in the overall series with Alabama, 24-21. Last season, the pair split the season series, with each team posting a home victory. The win snapped a six-match winning streak by the Crimson Tide in the CAVE dating back to 2001. Only one venue in the league have the current Tigers never posted a win in and that is Florida’s O’Connell Center.

The Tigers will close out the regular season SEC schedule next weekend. LSU will host Georgia on Friday at 7 p.m. before facing Auburn on Sunday at 1:30 p.m. Against the Bulldogs, groups of 10 or more will get into the match for FREE by calling the LSU promotions office at (225) 578-8960. In addition, a pregame tailgate party will take place beginning at 5:30 p.m. Closing out the SEC schedule against AU, the Tigers will celebrate senior Michelle Hensgens and the first 100 fans will receive a free LSU pot holder. Any fan bringing a non-perishable food item to donate to the Thanksgiving Food Drive will get in FREE.