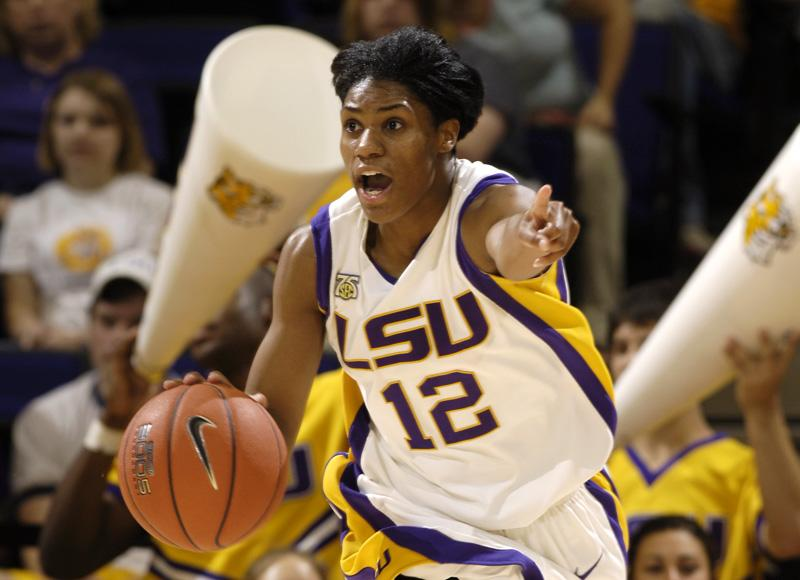 BATON ROUGE — Sylvia Fowles played only 21 minutes but didn’t miss from the field, scoring 16 points to lead the No. 5 LSU women’s basketball team to a 73-54 victory over TCU on Sunday at the Maravich Center in the quarterfinal round of the Preseason Women’s National Invitation Tournament.

LSU (2-0) shot 60.9 percent in the second half on its way to advancing to WNIT semifinal.

The Lady Tigers will face No. 17 Michigan State Thursday, Nov. 15, at 7 p.m. CST in the Maravich Center.

The Spartans defeated Evansville on Sunday, 73-53, in East Lansing, Mich.

Tickets will go on sale Tuesday at 8 a.m. CST on LSUsports.net and at the LSU Athletics Ticket Office.

TCU (1-1) falls into a consolation final against an opponent to be determined by the WNIT.

“I thought we played really well when Sylvia (Fowles) was out of the game,” LSU head coach Van Chancellor saod. “We did some really nice things and played hard. (Khalilah) Mitchell gave us a really nice lift off of the bench in the first half. Tae-Tae (LeBlanc) was outstanding.”

Fowles made all six of her attempted from the field, though she saw only six minutes of action in a close first half. LSU trailed 13-7 when she went to the bench, but outscored TCU by 13 without her in the lineup.

The 6-6 All-America center also grabbed six rebounds and was 4-of-5 from the free throw line.

Khalilah Mitchell had seven points in 17 minutes off the bench and RaShonta LeBlanc had five points, a career-high nine rebounds, three assists and six steals as the Lady Tigers point guard.

LSU guard Quianna Chaney added 14 points despite struggling from the field (5 of 16), while guard Allison Hightower scored 12 points on 4-of-6 shooting and dished seven assists.

The Lady Tigers were 17-of-22 from the free throw line in a physical contest that included 39 personal fouls.

With the strong second-half shooting performance, LSU finished at 48 percent from the field (24 of 50) while holding TCU to 33.3 percent in both halves.

Though blanketed by LeBlanc most of the game, TCU guard Adrianne Ross managed to lead her team with 14 points on 5-of-13 shooting. Guard Helena Sverrisdottir added nine points and six rebounds.

The Horned Frogs pulled ahead in the opening minutes, 11-2, after hitting 4-of-6 shots while LSU struggled from the field and turned the ball over twice.

Though Fowles committed her second personal foul six minutes into the game, the Lady Tigers rallied to lead 16-15 with just less than 10 minutes left in the half.

Behind stellar ball-pressure defense, LSU completed a 29-6 run with a three pointer by Hightower and a jumper by guard Mitchell that extended the Lady Tigers’ lead to 31-17 with 5:08 left.

Still trailing by 14 with two minutes left in the half, TCU scored the final seven points of the half to cut the deficit to 35-28 at the break.

With Fowles back in the game, the Lady Tigers opened a 16 point lead early in the second half when Chaney hit a three-pointer.

TCU got no closer than 11 in the final 12 minutes.

Opening statement…
“I thought we played really well when Sylvia (Fowles) was out of the game. We did some really nice things and played hard. (Khalilah) Mitchell gave us a really nice lift off of the bench in the first half. Tae-Tae (LeBlanc) was outstanding. She played 35 minutes and played point. Their player (Adrianne) Ross, we held to 14 points which is outstanding.”

On RaShonta LeBlanc‘s performance…
“We played her at the point, even though we haven’t practiced her much at the point. We played a lineup today that we have not practiced. Defensively, we played the same way we did in our second exhibition game when Erica (White) got hurt. I thought without Erica we could not do some things we have been doing defensively. We gave up some things like free-throw block outs that we don’t normally give up.”

On LSU’s long scoring run …
“I thought we just couldn’t get anything going offensively. They’re a tough team to score against. They’ve got excellent perimeter quickness. They’re long out there, and during that stretch we just couldn’t find any offense. I really hoped we would find offense in their press. We wanted to attack their press and be aggressive. We left some points out on the floor because we missed some free throws, but there is not much room for error when you play them here.”

On how his team improved from the first game to this game …
“I was pleased with the way Micaela Younger went at (Sylvia) Fowles. She didn’t back down from that challenge. I thought our guards handled the pressure better than we did the other night. Fifteen turnovers against them (LSU) is a lot better than we had the other night. It was an improvement. We played better today.”

On her performance the second half…
“I owe it to my teammates. They kept encouraging me to shoot and get the ball to the basket. The first half I was off, but in the second half I slowed down, took my time and knock down the shots.”

On her performance in the game…
“Every time I step back out on the floor, I try to give it a little more energy, than I did the time before. I think I have proven myself tonight.”

On some of the mistakes made in the game…
“I was frustrated at first, but once I thought the depth we have with our team and what they bring to the table, I calmed down. We made some minor mistakes, but there is still time to clean that up. I’m proud of my team and I’m happy with the way they carried themselves while I was on the bench.”