Volleyball Looks to Take Over SEC West at Alabama 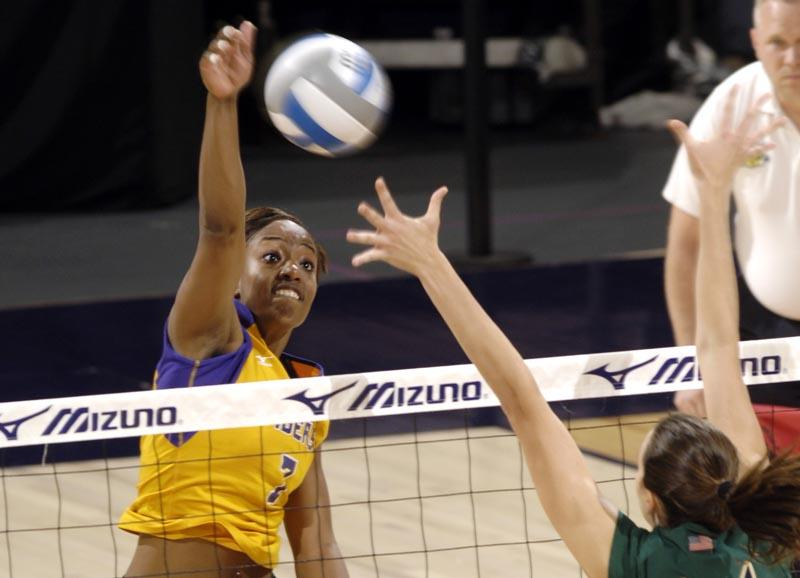 TUSCALOOSA, Ala. — With three teams huddled atop the Southeastern Conference Western Division with only three league matches remaining, the LSU volleyball teams takes on Alabama on Sunday at 1:30 p.m. in the CAVE in a match-up of two of those top three teams.

The two-time defending SEC Western Division champion Tigers (21-6, 12-5 SEC) are currently tied with the Crimson Tide (15-11, 12-5) and Ole Miss for the SEC West lead after Florida clinched its 17th straight overall league title with a win on Friday. LSU will be looking to end Alabama’s streak of six consecutive home wins over the Tigers, dating back to 2001.

LSU knocked off Alabama, 31-33, 30-23, 33-35, 30-21, 15-7, in the Maravich Center earlier in the year, while the Rebels swept their season series with the Crimson Tide with a win on Thursday. The Tigers have already completed their sweep of Ole Miss with two wins earlier in the year.

“We have got to be efficient offensively and we have to get our side out game going at a higher level and reduce our hitting errors,” said Flory. “If we do those things I think we will be in a decent position to have the opportunity to win.”

In their first meeting this year, Kyna Washington led LSU with 21 kills, while recording 17 digs and two service aces. Marina Skender became the first LSU player in a year to record both 20 kills and 20 digs as she finished with 20 kills and 25 digs to go along with an ace and three blocks.

Lauren DeGirolamo posted 17 kills, while also hitting a team-best .467 and a team-best six blocks. Brittnee Cooper posted 13 kills to go along with three blocks. Elena Martinez finished one dig shy of 30 with a match-leading 29, while Michelle Hensgens posted 13.

Coming in off the bench in the second game, Brittney Johnson led LSU with 39 assists. The freshman also posted four kills, two aces, four digs and two blocks in the most action she has seen in a league match in her career. Maggie Lonergan started and posted 22 assists, three aces and four digs in two games.

As a team, LSU dominated Alabama in almost every statistical category, which made the match seem lopsided and not the hotly contested five-game epic it was. The Tigers out killed the Crimson Tide by nearly 30, 82-53, while also out hitting Alabama, .205 to .102. In addition to out digging the Crimson Tide, 96-85, LSU posted 10 service aces while not allowing Alabama to finish with one. The only category the Crimson Tide topped the Tigers in was blocks, holding a slight 13.0 to 10.0 advantage.

For the season, LSU and Alabama are fairly evenly matched statistically. The Tigers hold a slight advantage in kills per game with 15.20, fourth best in the SEC, compared with 15.18, sixth best; but the Crimson Tide hold a slight advantage in hitting percentage, .222 to .211. LSU is one of the best serving teams in the league, averaging 1.83 aces per game, while Alabama is sixth in the conference with 1.62 aces per game.

Defensively, the Tigers hold a commanding lead over the Crimson Tide in blocks, averaging a league-best 3.13 blocks per game after recording a season-best 21.0 against Mississippi State on Friday. Alabama is posting 2.25 blocks per game, which ranks eighth in the conference. Conversely, the Crimson Tide lead the SEC with 18.33 digs per game, while LSU ranks seventh with 16.92 digs per game.

Washington and Skender became the first two LSU players to record 1,000 career kills in the same season since 2005, and are the first Tigers to both accomplish the feat during their junior seasons since Nyla Shepherd and Julie Stempel in 1990. Averaging just under four kills per game, Washington is fourth in the SEC and needs 90 kills to break into the top 10 in single-season kills in LSU history. Skender is currently fourth on the team and averaging 2.69 kills per game.

The Tigers boast a pair of dominate players up the middle as LSU has one of the most impressive duos in the league. Cooper currently ranks second in the SEC and 19th in the NCAA with 1.52 blocks per game, followed closely by DeGirolamo at fourth in the league and 42nd nationally with 1.42 blocks per game, the only two players from the same team ranked in the top five. On Friday, DeGirolamo recorded 11 blocks with 20 kills for her second double-double of the year and fifth of her career.

In her first year as the starting libero, Martinez has recorded double-digit digs in every match this year, ranks second in the SEC and 34th in the nation with 5.49 digs per game. She broke Kassi Mikulik‘s single-season digs record and is now 63 digs away from breaking the SEC single-season mark, currently only seven digs away from becoming just the second player in SEC history to record 600 digs in a single season.

Crystal Hudson leads a trio of Alabama players with over three kills a game, followed by Bridget Fuentez and Brooks Webster with 3.98, 3.74 and 3.07 respectively. Hudson also leads the Crimson Tide and ranks fourth in the SEC with a .359 hitting percentage. She is also the only Alabama player averaging over a block a game, posting 1.05 per frame.

Amy Pauly leads the Crimson Tide and ranks fourth in the league with 5.27 digs per game, while Fuentez is second on the team while averaging 3.79 digs per game. Brigitte Slack leads her team and ranks third in the league with 11.84 assists per game. Crystal Hudson, Megan Hudson, Fuentez and Slack, all key components of Alabama’s starting line-up, will be honored following the match for Senior Day.

LSU holds a slight advantage in the overall series with Alabama, 23-21. Last season, the pair split the season series, with each team posting a home victory. The Tigers have dominated the Crimson Tide in the Maravich Center, winning three straight and five of the last six meetings dating back to 2000, while Alabama dominates at home in the CAVE against LSU, winning six straight meetings dating back to 2001.

The Tigers will close out the regular season SEC schedule next weekend. LSU will host Georgia on Friday at 7 p.m. before facing Auburn on Sunday at 1:30 p.m. Against the Bulldogs, groups of 10 or more will get into the match for FREE by calling the LSU promotions office at (225) 578-8960. In addition, a pregame tailgate party will take place beginning at 5:30 p.m. Closing out the SEC schedule against AU, the Tigers will celebrate senior Michelle Hensgens and the first 100 fans will receive a free LSU pot holder. Any fan bringing a non-perishable food item to donate to the Thanksgiving Food Drive will get in FREE.