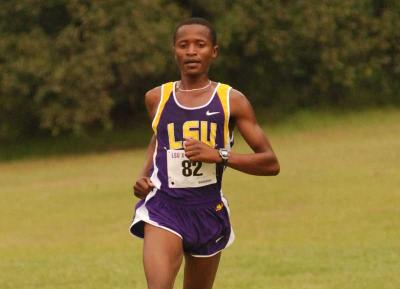 Simuchimba becomes just the fifth athlete in Tiger history, and the first since the 2001 season, to advance to the NCAA meet. He did so behind a season-best outing that saw him finish the 10K Agri Park course in an impressive 29:52.1.

“That was a tremendous run for Joseph,” said LSU cross country coach Mark Elliott. “He ran nearly 40 seconds faster than he did on this course at the Chile Pepper Festival just under a month ago. That is a huge improvement and a great effort. Now we have got to get him ready for the national meet.”

The NCAA Championships are scheduled for Nov. 19 in Terre Haute, Ind.

Simuchimba was not the only Tiger to excel on Saturday as sophomore Jacob Simmons also earned all-region honors by virtue of his top 25 finish. A native of Houma, La., Simmons clocked a season best 31:02.1 to place 23rd overall and record his fifth top-25 showing in six meets this season.

In all, the Tigers accumulated 188 team points to place fifth overall as each of the five scoring runners turned in season-best efforts.

“The men ran extremely well today,” said Elliott. “They entered the meet ranked sixth in the region and came out ahead of that. I feel like we finished off the year on a good note.”

Arkansas and Texas finished 1-2 in the team standings to earn the automatic bids to the NCAA Championships.

“The women were ranked 13th coming into this meet so to finish 11th I think is a good showing,” said Elliott. “I felt all seven athletes ran well. Obviously, you always hope to finish higher, but I think we ended the season on a good note.”

The following teams and individuals were selected to the NCAA Championships (on Nov. 11, 2007):