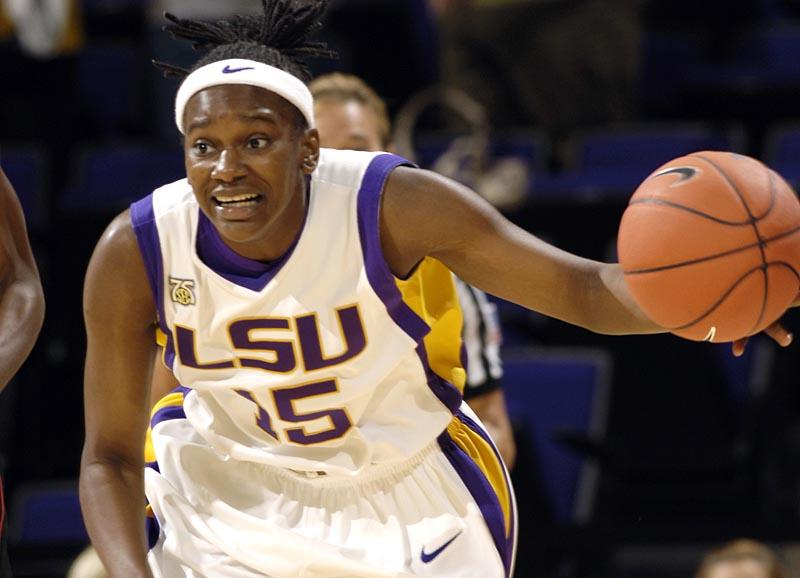 BATON ROUGE — Quianna Chaney scored a career-best 25 points in only 21 minutes of play, leading the No. 5 LSU women’s basketball team to aN 86-38 blowout victory over Samford in head coach Van Chancellor‘s first game at LSU.

“Coaching feels pretty natural to me,” chancellor said. “It is still a little strange for me to be in purple and gold, but coaching does not feel strange to me. I have been in the other colors so long. I look up some times and say ?I am the LSU coach.’ I love it because I have a team that responds to everything I say.”

LSU (1-0) advanced to the quarterfinal of the Women’s Preseason National Invitation Tournament and will face TCU (1-0) on Sunday at 2 p.m. in the Maravich Center.

The Horned Frogs defeated Radford on Friday evening in Fort Worth, Texas, 74-63.

Samford (0-1) falls in to the consolation bracket. Their next opponent in the WNIT is to be determined.

Chaney hit 9-of-13 baskets including 3-of-5 three-pointers to eclipse her career high of 24 set last season against Michigan State. She also tallied five assists and four steals.

She along with guard Allison Hightower dominated the first half, as All-America center Sylvia Fowles was forced to the bench with two early fouls.

“I was really pleased with how our team responded when Sylvia went out of the game,” Chancellor added. “Without Sylvia we were playing with Ashley (Thomas) and Katherine Graham. When we lost Ashley we were playing small ball at the time and after she went out we were playing even smaller ball. I thought they responded really well.”

Hightower was also hot from the field, making 7-of-9 shots for 17 points including three three-pointers.

Fowles, who played only 16 minutes, made all five attempts from the field and scored 10 points with six rebounds and had four of LSU’s 20 steals.

The Lady Tigers outrebounded the Bulldogs, 34-24, and scored 42 points off 28 Samford turnovers.

After falling behind by a point three minutes into the season opener, Chaney rolled off nine-straight points and Hightower added the next nine to give the Lady Tigers a 24-7 lead with 8:54.

The 17-0 run crippled the Bulldogs, who struggled to get into their motion offense against LSU’s tight man-to-man defense.

Over a 12-minute stretch, Hightower and Chaney scored all 25 of LSU’s points.

Hightower matched her career high of 14 at the break, as the Lady Tigers led 44-19.

The Chaney Show continued in the first four minutes of second half, as the senior scored 11 points on 4-of-4 shooting before heading to the bench in a blowout.

Allison Hightower reached double figures in scoring for the sixth time in her career with 17 points tonight.

Hightower’s 17 points were a career-high. Her previous high was 14 points against Mississippi State on Jan. 14, 2007.

Sylvia Fowles reached double figures in scoring for the 91st time in her career with 10 points tonight.

Head coach Van Chancellor moved into a tie for 30th on the NCAA career wins among active coaches list with 440.

On coaching his first game as LSU’s coach…
“Coaching feels pretty natural to me. It is still a little strange for me to be in purple and gold. Coaching does not feel strange to me. I have been in the other color so long. I look up some times and say ?I am the LSU coach.’ I love it because I have a team that responds to everything I say. I drew up a play for (Allison) Hightower that we have never run and she made a three off of it. That is fun coaching that way.”

“I thought Erica White played really well tonight. I thought our team played well without our two big players in the game, especially without Sylvia.”

On how well Quianna Chaney and Allison Hightower shot the ball…
“I have said it all along ? we are only going to go as far as that (their shooting) can carry us. However, that ends up is where we will be.”

On Quianna Chaney‘s improved shooting…
“One of my former players that I coached in high school men’s basketball was at practice playing with Chaney. That kid was a great shooter and we were just talking about Chaney and he said ?Coach I can’t believe you are going to let her shoot the ball so flat’ and she heard that. So we started working with her shooting the ball up. He just said ?She just needs to shoot the ball up.’ I told him ?Mac I have been trying to tell her that since the day I got here on April 11 so maybe you can help her.’ It looks good tonight but hopefully we can keep that up.”

On her performance tonight…
“I was just glad I was able to help my teammates out. It didn’t dawn on me until last night that this was my last first game in the PMAC. I’m going to get out on the court and give it all I have.”

On the team putting up shots…
“We have gotten in trouble several times in practice for not taking a shot. When (Van Chancellor) came in he told us he was going to increase our shooting percentage. He wanted to build our confidence up shooting the ball, and that is what we have done.”

On what Van Chancellor is emphasizes…
“He stresses hitting the offensive boards, so we have to get in there and hit it.”

On the chance that Van Chancellor would call her the second best shooter in the country…
“It would be nice, but as long as I can just keep hitting those shots, that is all that I am worried about.”

Opening statement …
“We got beat by the fifth ranked team in the country. I guess that’s the best way to put it.”

“One of the things we wanted to do, and thought was our only chance to win the basketball game, was make them make threes. They made over 50 percent of them. We couldn’t contest their threes. We forced them to take perimeter jump shots and threes. We did that pretty well, but they made enough of them.”

“Once we got Sylvia Fowles out of the game, I think that is when it turned for them. It looked like they played with more energy. They looked quicker. They had more guards. They pressured us. They gave us trouble. I don’t know if we let down for any reason, but I think the whole game changed when she went out with her second foul. They became really perimeter oriented in their game on both defense and offense.”

On LSU’s team …
“They are definitely more perimeter oriented than in the past. They showed that they have some players that can do some things on the perimeter. I think that was the biggest thing. They have some weapons.”

“This is a top five program in the country. They have a hall of fame coach and they have five starters that have played in more games than I have coached.”

On Sylvia Fowles …
“I think she’s the best player in the country. I say that because she can change the game on both ends of the floor. She just covers a tremendous amount of space.”