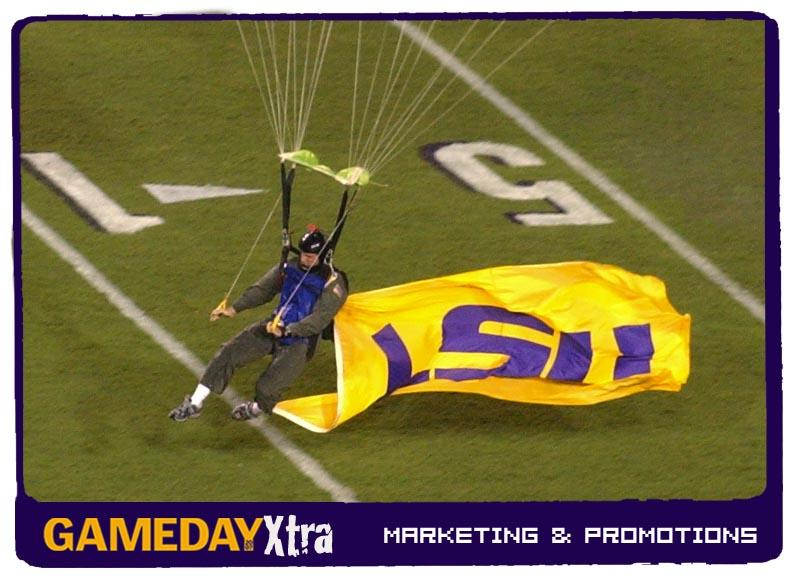 The first home game for the No. 2- ranked LSU Tigers was filled with anticipation. A record crowd waited with excitement for the 2007 kickoff. Then, from the west side came three parachuters flying in one by one. The Virginia Tech Flag, the American Flag and to a standing ovation came LSU’s purple and gold flag. Three weeks of preparation had finally come to a head for the LSU Marketing and Promotions Department. Their plan for the entrance of LSU’s biggest home game of the year had finally happened and it was a huge success.

“The parachuters for the Virginia Tech game were completely organized through our department. We wanted to do something that honored Virginia Tech, but we also knew they wanted to return to as normal as possible, much the same way as LSU fans felt after Hurricane Katrina,” said LSU Director of Marketing and Promotions Guy Gaster.

Marketing and Promotions jobs revolve almost entirely around fans and making sure that whatever athletic experience they have at LSU, it makes them want to come back for more. They coordinate even the smallest of details to ensure that things not only run smoothly, but that the fans stay involved in the game. They use a variety of techniques to achieve their goal. Prizes for the first 100 entrants, t-shirt throws at half time and carefully contemplated graphics on the big screens in Tiger Stadium all keep the fans pumped and certainly add to the atmosphere that make Tiger athletics what they are. One of the highlights of the Marketing and Promotions Department is coordinating homecoming.

The department doesn’t rest until it knows that each fan in Tiger Stadium has had a unique experience and during a regular game week that means making sure all the pregame presentations run smoothly, satisfying the needs and wants of sponsors, and working on the big screen scripts and graphics that more than 92,000 fans will watch during the game. One of the most important aspects to the Marketing and Promotions department is that the history and tradition of LSU be kept intact at football games.

“The tradition of LSU football takes center stage of everything. We don’t do a lot extra because LSU is LSU football and we want to keep it as close to that as we can. A lot of the recognitions you see before the game are traditional ones, ones with which LSU has a working relationship.”

“A lot of the recognitions you see take place before the football game are traditional ones. One of the ways we try to honor our past is through the guest captains program,” said Gaster.

All of these things, of course, are on a regular week, but throw in Homecoming, and the tasks of the Marketing and Promotions Department double. During Homecoming week, it is their job to make sure that the winners of homecoming contests are properly recognized as well as to get information out to the teams who would like to participate in the homecoming parade.

Marketing and Promotions also helps get the Tiger team to the pep rally before the night before the big game itself.

Game night, fans enter Tiger Stadium to pulsating music and an atmosphere unlike any other in the nation, which Marketing and Promotion helps facilitate. Everything from the music played in the stadium to the graphics flashed across the screens of the LSU scoreboard. This year fans will have a different pre-game prior to homecoming.

“This year we are actually going to crown the king and queen in the pregame,” said Gaster.

Aside from the coordination of the coronation, Marketing and Promotions also helped facilitate country music legend Lee Greenwood’s Saturday night performance with The Golden Band from Tiger Land. They worked with the band as well as Greenwood to coordinate practice time for both the national anthem and half time performance.

All of the events and activities that Gaster has prepared for culminate in the half-time performance. Precision timing is of the utmost importance as Gaster roams the sidelines giving constant directions through his headset.

Even after their work is done Saturday night, Marketing and Promotions still have a job to do. “Usually we have volleyball or soccer in the same weekend, and toward the end of the season, basketball starts up,” said Gaster. Without Marketing and Promotion, the famous atmosphere of Tiger athletic events would not be the same.