It's GameDay: Tigers, Bulldogs Square Off on Homecoming 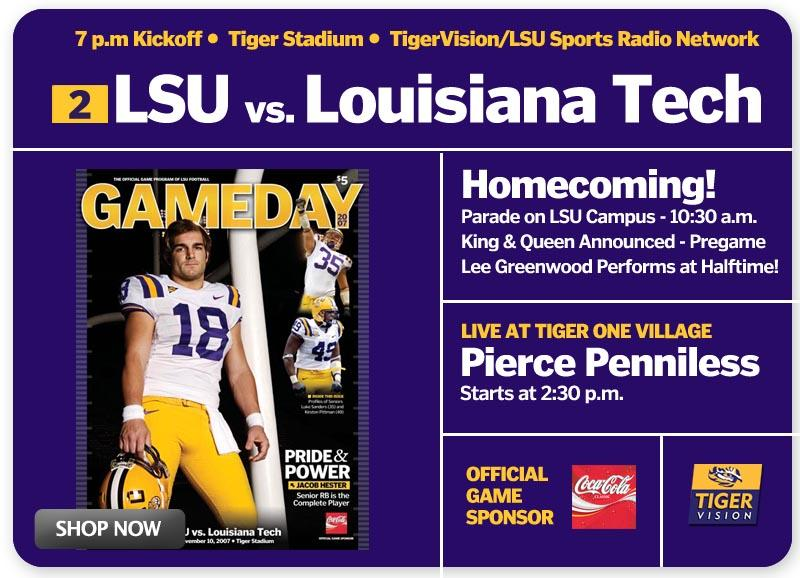 BATON ROUGE — LSU will take a break from Southeastern Conference action on Saturday as the second-ranked Tigers welcome Louisiana Tech to Tiger Stadium for the annual Homecoming contest.

Kickoff for the Tigers and Bulldogs is scheduled for 7 p.m. The game will be broadcast on LSU’s in-house pay-per-view network, TigerVision.

Members of the Geaux Zone on LSUsports.net can watch LIVE pregame video (ends at kickoff per SEC regulations) and listen to the entire game audio broadcast starting at 5 p.m. CST. Not a member? Join now.

LSU enters the contest right in the middle of the national title hunt as the Tigers are ranked No. 2 in the latest Bowl Championship Series Standings. After this weekend, 8-1 LSU has remaining regular season games against Ole Miss and Arkansas. LSU is also one victory away from clinching a spot in the SEC title game.

Tech, who is coached by former LSU assistant coach Derek Dooley, has won two of its last three games and stands at 4-5 overall. This will be the first meeting between the teams since the 2003 season when the Tigers posted a 49-10 win over the Bulldogs on their way to claiming the national title that year.

“We’ve had a good week of preparation,” LSU coach Les Miles said. “We have made it a point of emphasis this week to address the mistakes we have been making. We are making our point and the players understand that we can’t continue to give our opponents additional opportunities and give up valuable field position with our mistakes and penalties.

“It is interesting, we have great habits here. The best thing this team does is when the game is on the line they love to play. There’s never been a time with this football team where we didn’t take the field with every opportunity to win no matter what the score was, what time in the game it was or what the situation was. That characteristic is a great habit. It is the best habit this team has. We also have an aggressive habit. We play tough and aggressive. Now, we have to factor in a little bit smarter here or there. If we can do that and make that a habit, that’s best.”

Despite all of its success this year, which include a nation’s best five wins over top 25 opponents,  Miles is quick to warn that his team will expect Tech’s best shot on Saturday and that the Tigers will come to play.

“I look forward to facing Louisiana Tech,” Miles said. “They are an in-state school that will come in and play an emotional game and play well. They have had some really strong performances this year. They have made real progress and it appears to me that they are playing much better football then they have in the past.

“I think Derek Dooley has done a good job there in his first year. Certainly he has a family with a rich tradition of coaching. Their kids play hard and you can see it on film. We understand they are a competitive football team. They played Hawaii close and are getting better each week. The scores that see you, whether they won or lost, is not really reminiscent of how good they can be. They fly around the ball and are capable. We are going to have to be prepared for their best shot.”

Offensively, the Tigers will continue to rely on the play of the senior trio of quarterback Matt Flynn, running back Jacob Hester and wide receiver Early Doucet. Flynn has thrown for 1,.619 yards and 11 touchdowns, including six in LSU’s last two games. Hester has rushed for team highs of 591 yards and seven touchdowns, including the game-winner last week against Alabama, while Doucet has caught 27 passes for 313 yards and four scores despite missing four games with an injury.

Senior safety leads the Tigers in tackles with 63, while senior defensive tackle Glenn Dorsey has 46 tackles, including 8.5 for losses and team-best five sacks. Dorsey, who was named one of four finalists for the Lombardi Award this week, is coming off a seven-tackle, one-sack effort against Alabama last week. That performance earned Dorsey SEC Defensive Player of the Week honors.

One player missing from the lineup on Saturday for the Tigers will be junior linebacker Darry Beckwith. Beckwith suffered an injury last week against Alabama and will not play against the Bulldogs.

“We are very optimistic (about Beckwith’s return),” Miles said. “It’s not a serious, serious injury. It’s one that will heal and we look forward to getting him back as soon as we can. We’d like to think that eight days and at the longest end maybe two weeks (on returning). Jacob Cutrera will see a lot more action. We are fortunate to have a number of linebackers that can rotate in there.”

After the Tech contest, the Tigers will travel to Oxford, Miss., next week to face Ole Miss. LSU then returns home on Nov. 23 for its traditional Friday after Thanksgiving game against Arkansas.