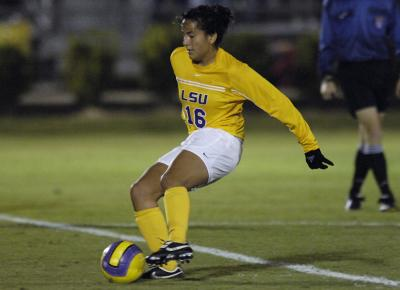 ORANGE BEACH, Ala. — The 25th-ranked LSU soccer team has advanced to the semifinal round of the SEC Tournament for just the second time in its history and is slated to battle No. 14 Florida on Friday in a 7:30 p.m. kickoff at the Orange Beach Sportsplex.

The top-seeded Gators (14-4-2) are one of the hottest teams in the country entering the postseason as they have won 10 straight matches, including a dominating 4-0 shutout of Kentucky in the first round of the SEC Tournament on Wednesday evening.

Florida has actually outscored its opponents by a 29-1 margin during its current winning streak as the Tigers also fell victim to the Gators by the score of 5-0 in Gainesville on Oct. 28.

“We have a tremendous challenge ahead of us when we kick it off tomorrow night,” said LSU head coach Brian Lee. “Florida is a great team, and you can argue that no one in the country is playing as well as they are right now. After losing their first two conference games, they’ve rolled off 10 straight wins and no one has been able to slow them down yet.”

The fourth-seeded Tigers (11-3-7) advanced to the semifinal round of the SEC Tournament in thrilling fashion as they outlasted fifth-seeded Auburn in penalty kicks on Wednesday night after battling their division rival to a 2-2 draw at the end of regulation.

Senior goalkeeper Valerie Vogler saved each of Auburn’s first two attempts, while Malorie Rutledge, Melissa Clarke, Taryne Boudreau and Chelsea Potts stepped up to the spot and ripped shots into the back of the net to give the Tigers a 4-2 win in the shootout.

LSU showed great resiliency by coming back from a pair of one-goal deficits in the second half as sophomores Michelle Makasini and Rachel Yepez each scored goals to force overtime.

Yepez is the team’s leading scorer with 14 goals and 30 points on the season, while Makasini is not far behind with nine goals and 21 points of her own. Yepez is the Tigers’ most prolific scorer in a single season since former Tiger Artie Brown scored 14 goals and 31 points in 2004.

“I was proud of the way we kept fighting and kept battling despite falling behind a good Auburn team twice in the second half,” Lee said. “That just shows the kind of character we have on this team. We’re going to need that same kind of fight and will to win when we kick it off tomorrow.”

LSU is looking for its first ever win over Florida, which holds a commanding 8-0-2 advantage in the all-time series. The club also hopes to make its first appearance in the championship match as it is now 1-5-1 all time at the SEC Tournament.