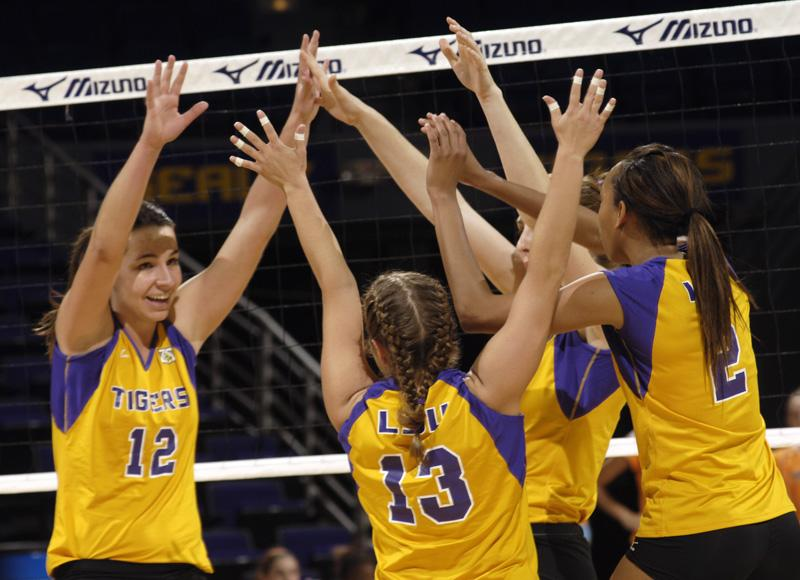 STARKVILLE, Miss. — The LSU volleyball team will close out its regular season road schedule this weekend as the Tigers travel to face Mississippi State on Friday at 7 p.m. in the Newell-Grissom Building, before taking on Alabama on Sunday at 1:30 p.m. in the CAVE.

LSU (20-6, 11-5 SEC) is currently tied with Ole Miss, a game behind the Crimson Tide in the Southeastern Conference Western Division standings, with four league matches remaining. The Tigers won both of their two matches at home this month, but come into the weekend after losing all four matches on the road in October.

LSU has won three straight over the Bulldogs and four of the last five, while also winning seven of the last eight on the road. The Tigers hold a commanding 42-7 series advantage over Mississippi State, but the Bulldogs have earned three of their four wins since 2003.

“This is still gut check time for us with two big matches on the road this weekend,” said LSU head coach Fran Flory. “We know there is a big match at Alabama on Sunday where we haven’t won at in a long time, but we can no overlook a very good Mississippi State team that has always given us fits on the road.”

Mississippi State enters the weekend having won two of its last three and sits at 11-14 overall and 6-10 in SEC play. The Bulldogs are fourth in the SEC Western Division and seventh overall. Since LSU knocked off Mississippi State in four games earlier in the year, 19-30, 30-22, 30-19, 30-25, the Bulldogs are 5-3 with two of the three losses coming on the road.

“We have to go into this weekend taking one point, one game, one match at a time and remain focused on the present,” said Flory. “We have to go after and attack an opponent on their court and not just sit back and wait for them to lose. Mississippi State and Alabama are both too go to be able to do that and win.”

In the first meeting this year, Kyna Washington and Lauren DeGirolamo led the match with 18 kills each, while DeGirolamo led the match with a .457 hitting percentage and nine blocks. Brittnee Cooper added six blocks, while Angela Bensend had five and Marina Skender had four. Elena Martinez posted her 11th 20-plus dig match of the year with a team-best 23, as Marina Skender posted 12 digs and led the Tigers with four service aces.

Coming in off the bench in the second game, Maggie Lonergan led LSU with 34 assists. With LSU’s offense limited by shaky serve receive off of the tough serving Mississippi State players, Lonergan was able to keep the Tigers in system more effectively than Brittney Johnson, who started the match and finished with eight assists.

As a team, LSU dominated the Bulldogs in most of the statistical categories, but had a lot of trouble with serve receive. The Tigers rallied from a nine-kill game one to post 59 kills for the match, 14 more than Mississippi State. Although LSU finished with only a .174 hitting percentage for the match, the Tigers were impressive in coming back from a negative hitting percentage in game one. In addition, LSU held Mississippi State to only a .101 clip as a team, dropping the Bulldogs down after they hit .200 in game one.

The Tigers posted nine service aces for the match, while also recording nine service errors, which was the second-fewest committed by LSU in a match at that point in the season. Unfortunately, the Tigers were aced on 11 occasions by Mississippi State, the most aces LSU has given up this season.

“Mississippi State is one of the toughest serving teams in the conference, and has been for several years,” said Flory. “They have always given us problems with their serve and did again in our first match this year. We will have to be efficient offensively and we know that first ball, ball control and serve receive is the key to that and will be the difference in this match.”

For the season, LSU leads the Mississippi State in almost every statistical category. The Tigers are averaging 15.4 kills per game, fourth best in the SEC, while the Bulldogs are posting only 14.6, 10th in the conference. In addition, LSU has a .212 team hitting percentage, while Mississippi State has hit .210 this year.

The Tigers are second to only the Bulldogs in service aces per game in the league, with LSU averaging 1.83 aces per game. Traditionally one of the best serving teams in the conference, Mississippi State leads the SEC with an average of 2.04 aces per game and has four players with 30 or more aces.

Washington and Skender became the first two LSU players to record 1,000 career kills in the same season since 2005, and are the first Tigers to both accomplish the feat during their junior seasons since Nyla Shepherd and Julie Stempel in 1990. Averaging over four kills per game, Washington is third in the SEC and needs 100 kills to break into the top 10 in single-season kills in LSU history. Skender is currently third on the team and averaging 2.74 kills per game.

The Tigers boast a pair of dominate players up the middle as LSU has one of the most impressive duos in the league. Cooper currently ranks second in the SEC and 19th in the NCAA with 1.52 blocks per game, while followed closely by DeGirolamo at fifth in the league and 42nd nationally with 1.38 blocks per game, the only two players from the same team ranked in the top five.

Offensively, DeGirolamo leads the team and ranks 132nd in the country with a .318 hitting percentage, while Cooper ranks second on the team and 198th in the nation at .270. DeGirolamo also ranks second on the team with 3.35 kills per game, followed by Cooper with the fourth best average on the team at 2.72 kills per game. The duo also became the first LSU players to record double-figure blocking matches in the same season since Regan Hood and Megan Heinz accomplished the feat in 2003.

In her first year as the starting libero, Martinez has recorded double-digit digs in every match this year, leads the SEC and ranks 34th in the nation with 5.56 digs per game. She broke Kassi Mikulik‘s single-season digs record and is now 83 digs away from breaking the SEC single-season mark, currently just eight digs away from moving into third place all-time. Martinez’s current digs per game mark would also shatter the school record of 4.69 digs per game recorded by Kassi Mikulik last season.

Cristina Jucan leads the Bulldogs with 3.33 kills per game, followed by Jamie Joyner with 3.25 per game. Erin Seago leads Mississippi State with a .321 hitting percentage. One of the worst blocking teams in the conference; the Bulldogs do not have a player averaging over a block a game, led by Lauren Kowal with 0.80 blocks per game. Megan Lukasek leads Mississippi State with 4.57 digs per game, the only player averaging over three digs per game on the team.

The Tigers close out their regular season road matches at Alabama on Sunday. LSU will take on the Crimson Tide at 1:30 p.m. in a match that could decide the SEC Western Division. Alabama leads the SEC West by one game, but the Tigers defeated the Crimson Tide in Baton Rouge in five games earlier this year. LSU will be looking to end Alabama’s streak of six consecutive home wins over the Tigers, dating back to the Tigers’ last win in the CAVE in 2001.