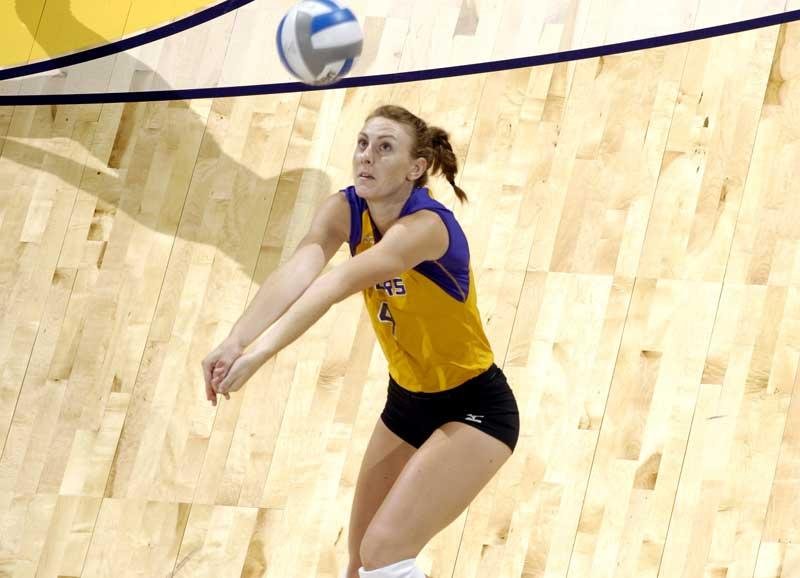 BATON ROUGE — LSU’s Lauren DeGirolamo was one of six student-athletes named to the 2007 ESPN the Magazine Academic All-District VI Women’s Volleyball First Team, it was announced on Thursday.

Athletes named to the first, second and third teams were selected by members of the College Sports Information Directors of America (CoSIDA) from District VI, which comprises all NCAA Division I institutions in Arkansas, Louisiana, Mississippi, New Mexico, Oklahoma and Texas. DeGirolamo and members of the first team will now advance to the national ballot and have a chance to earn a position on the Academic All-America team to be announced Nov. 28.

A redshirt sophomore, DeGirolamo leads LSU with a 3.91 overall grade point average in math with a secondary education concentration. A two-time member of the SEC Academic Honor Roll, she would like to become a high school math teacher following graduation.

The Most Valuable Player of the Mizuno Tiger Classic and the Mizuno Invitational II, DeGirolamo was named the Southeastern Conference Defensive Player of the Week on Oct. 8. The middle blocker is fifth in the league and 42nd nationally with 1.36 blocks per game. Offensively, DeGirolamo leads the team, ranks 132nd in the country with a .318 hitting percentage. She also ranks second on the team with 3.35 kills per game. Currently ranked third in career blocks per game in LSU history, DeGirolamo has led or tied for the team lead in blocks in 15 of 26 matches this season and led the Tigers in kills in nine of 26 matches.

Against New Orleans on Aug. 24, she tied for the third highest hitting percentage in a match with 15-19 attempts in school history. Recording 12 kills on 16 attempts with no errors, she posted a career-high .750 clip, which was just behind the school record of .800 set in 1988. Against Rice on Sept. 1, DeGirolamo tied for the fourth most total blocks in a four-game match with 12 and the sixth most block assists with nine.

She earned the Defensive Player of the Week honor after posting 17 kills and six blocks with a .467 hitting percentage against Alabama. She topped that performance against Mississippi State where she tied for the match high with 18 kills while hitting at a match best .457 clip. She also led the match with nine blocks.