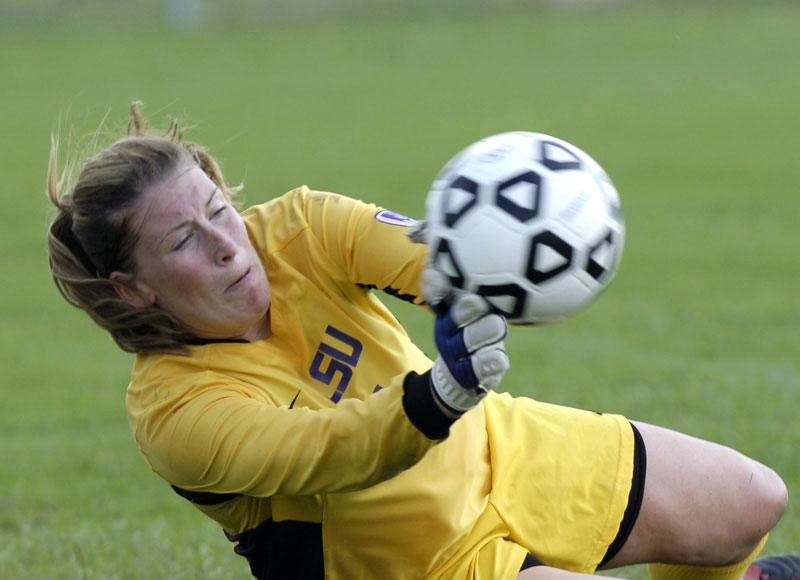 ORANGE BEACH, Ala. — After battling the Auburn Tigers to a 2-2 draw in regulation Friday, the 25th-ranked LSU soccer team converted on each of its four penalty kicks to advance to the semifinals of the SEC Tournament for just the second in school history.

With senior goalkeeper Valerie Vogler denying Auburn on each of its first two attempts, Malorie Rutledge, Melissa Clarke, Taryne Boudreau and Chelsea Potts each stepped up to the spot and converted to set up a match with top-seeded Florida on Friday at 7:30 p.m.

“We feel really good about our chances when we have to go to penalty kicks,” said LSU head coach Brian Lee. “That’s something that we practice a lot, and that practice really showed for us tonight. Val started off with two big saves, and those four each stepped up and took them well. The kids showed a lot of character tonight in the way they played.”

LSU controlled the flow of play throughout the match and nearly doubled Auburn’s shot count by a 21-11 margin, including a slight 11-10 edge in shots on goal. The side also held a 9-4 advantage in corner kicks for the match.

Auburn’s Kara Kasten gave her team a 1-0 lead at the 57:03 mark of the second half, but LSU midfielder Michelle Makasini knotted the score exactly three minutes later with her ninth goal of the season at the 60:03 mark as she rifled a shot inside the far post from 12 yards out in the left side of the penalty area.

Senior defender Caroline Vanderpool was credited with her first assist of the season on the goal as she gathered an Auburn clearance just inside the midfield stripe and played a perfect volley over the Auburn defense to a streaking Makasini near the top of the area.

Kasten again gave Auburn a one-goal lead in the 67th minute as she scored her second goal of the match and fourth of the year by ripping a header into the net off a cross from Caitlin King.

But Auburn was unable to hold the lead as the Tigers drew level in the 79th minute when sophomore striker Rachel Yepez scored her team-leading 14th goal of the campaign by firing a shot inside the far post from 15 yards out in the left side of the area. Fellow sophomore Amanda Carreno was credited with an assist on the goal.

“I thought the kids really showed tremendous character in coming back not once, but twice tonight after falling behind in the second half,” Lee said. “It was a true No. 4 against No. 5 match with two teams battling up and down the field to the very end.”

The Tigers will now take on one of the nation’s hottest teams as the top-seeded Florida Gators crushed eighth-seeded Kentucky earlier in the evening by the score of 4-0. The Gators are playing some of the best soccer in the country as they are riding a current 10-game winning streak in Southeastern Conference play and have climbed to as high as No. 14 in the national polls.

Florida is one of just two teams to defeat LSU in conference play this season as the Tigers fell by a 5-0 margin when the sides squared off in Gainesville back on Oct. 28.

“We’ve got a tremendous challenge ahead of us on Friday night as we prepare to go against one of the very best teams in all of women’s college soccer,” Lee said. “Florida has played amazing soccer over the last half of the season and will playing with a lot of confidence on Friday night.”