Football Continues to Prep for Homecoming 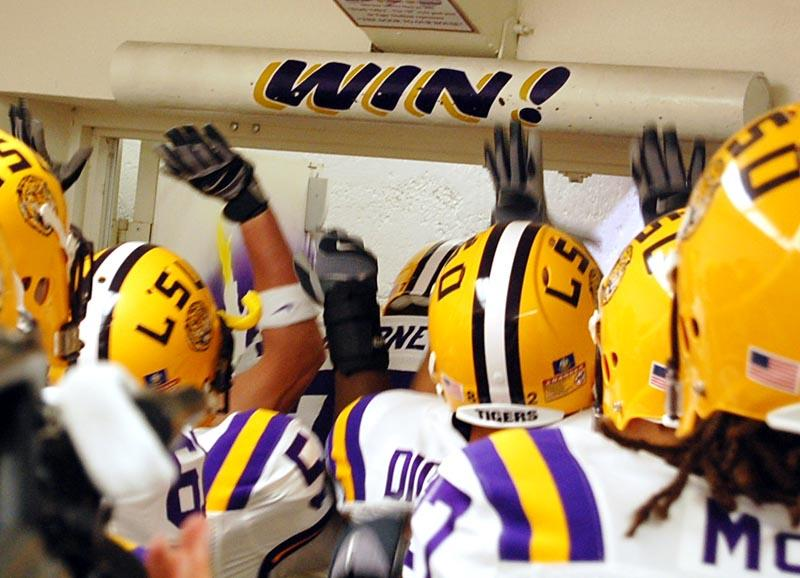 The second-ranked Tigers and Bulldogs square off at 7 p.m. on Saturday in Tiger Stadium. The game will be televised on LSU’s in-house pay-per-view network TigerVision. LSU brings an 8-1 overall mark into the contest, while Louisiana Tech is 4-5 overall.

“We had another good practice today and I like what I’ve seen on the practice field this week,” LSU coach Les Miles said following Wednesday’s practice. “I like the attention to detail and the spirit of the team. It’s been a good week of practice.”

Miles said that the Tigers will be without middle linebacker Darry Beckwith for Saturday’s game after suffering an injury in the 41-34 win over Alabama. Beckwith is third on the team with 50 tackles, including 6.5 tackles for losses and 1.5 sacks.

“We are very optimistic (about Beckwith’s return),” Miles said. “It’s not a serious, serious injury. It’s one that will heal and we look forward to getting him back as soon as we can. We’d like to think that eight days and at the longest end maybe two weeks (on returning). Jacob Cutrera will see a lot more action. We are fortunate to have a number of linebackers that can rotate in there.”

One area of focus on the practice field this week has been eliminating some of the penalties that have haunted the Tigers in recent weeks. Miles said the Tigers have to play smarter and with greater focus in order to eliminate the penalties.

“We’re making our point,” Miles said. “I believe our guys understand that. It’s an awareness issue. It needs to be drummed home routinely. Getting to the back end of the (season), hopefully we won’t have anymore of those from this point forward. They have to hear it routinely.

“It is interesting, we have great habits here. The best thing this team does is when the game is on the line they love to play. There’s never been a time with this football team where we didn’t take the field with every opportunity to win no matter what the score was, what time in the game it was or what the situation was. That characteristic is a great habit. It is the best habit this team has. We also have an aggressive habit. We play tough and aggressive. Now, we have to factor in a little bit smarter here or there. If we can do that and make that a habit, that’s best.”

The Tigers will practice again on Thursday followed by a walk-through on Friday afternoon.