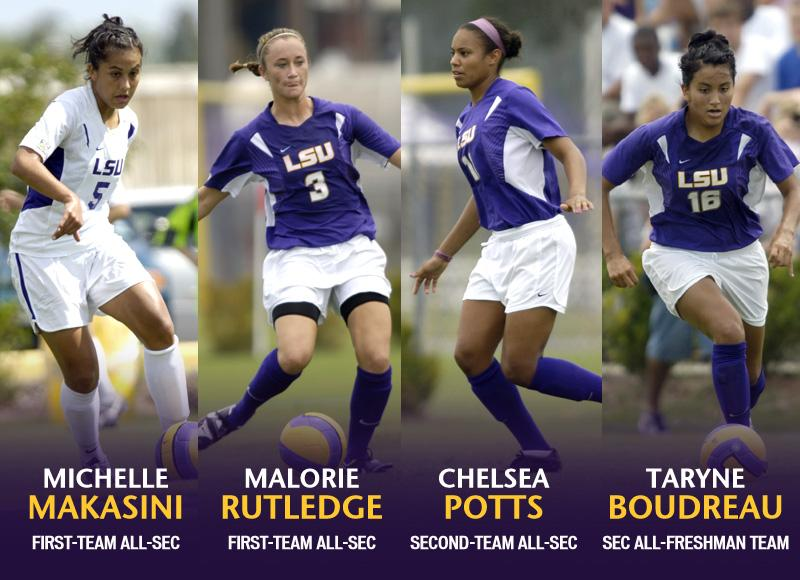 BATON ROUGE — For the second straight season, four members of the LSU soccer team have earned All-SEC recognition for their outstanding performance on the pitch as postseason awards were announced by the league office Tuesday evening.

This marks the first time that the Tigers have had two first-team selections in the same season and is the fourth year in a row that an LSU athlete has been named to the All-SEC squad.

The Tigers have soared to unprecedented heights in 2007 as they captured their first ever SEC Western Division title with their best record in conference play at 5-2-4 in 11 SEC matches, while they have also been ranked nationally for much of the regular season.

“This has been a historic season for the LSU soccer program, and each of these young ladies has certainly played an important role in our success this fall,” said LSU head coach Brian Lee. “But a lot of credit goes to the talented supporting cast around them. This has truly been a group effort as we continue to build one of the top programs in the SEC.”

Makasini and Rutledge have each earned the first all-conference honor of their young careers after being named to the SEC All-Freshman Team a year ago. They join past LSU standout Artie Brown as the only First-Team All-SEC performers in program history.

After leading the Tigers in scoring as a freshman, Makasini followed with an outstanding sophomore campaign as she finished the regular season as the team’s leading scorer in SEC play after scoring five goals and recording one assist for 11 points in 11 conference matches.

Rutledge has proven to be one of the premier attacking players in the SEC this fall as she set an LSU single-season record with 12 assists while finishing the regular season as the team’s second-leading scorer with four goals and 20 points from her position on the right wing.

“Michelle and Malorie are both key attacking players for us and are among the best in the SEC at what they do,” Lee said. “We expect both of them to create and score goals when we’re in the attacking third, and they’ve certainly been very successful at doing that this year.”

Potts has earned second-team recognition for the second straight season after earning Freshman All-America honors as one of the nation’s premier center backs a year ago.

The native of Aurora, Ill., has been a lynchpin for LSU’s young back line as she has started 39 of 40 games at center back over the last two seasons while establishing herself as one of the premier defenders in all of women’s college soccer during that span.

“Chelsea is a class defender and allows us to do everything we want to do in the attack by holding down the middle of the defense by herself,” Lee said. “She’s improved each game after suffering an injury during the summer and has had a truly great season along our back line.”

Boudreau has been a welcomed addition to one of the more talented midfield units in the nation as she has cracked the starting lineup in all 20 matches this fall. A native of Sherwood Park, Alberta, Canada, and a Soccer Buzz Top International Recruit for the Class of 2007, Boudreau has helped lead one of the SEC’s top offenses with three goals and seven assists on the year.

“From the first day of fall camp, Taryne has had a big impact on our team,” Lee said. “She’s been a tremendous two-way midfielder and has great potential moving forward in her career at LSU.”

With an SEC Western Division title already in the bag, the Tigers will look to add an SEC Tournament title to their resume as they open play in the first round on Wednesday by taking on fifth-seeded Auburn with kickoff set for 7:30 p.m. They will compete as the No. 4 seed after finishing one point clear of Auburn in the league standings during the regular season.