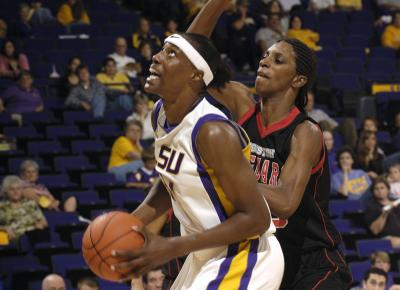 LSU (2-0 in exhibition play) opens the season on Friday when it plays host to Samford in the first round of the Women’s National Invitational Tournament at 7 p.m. CST.

Reserved guard Marian Whitfield had 14 points on 7-of-8 shooting in 18 minutes, while guard Allison Hightower was 4-of-14 for 11 points and forward Mesha Williams was 3-of-5 for 10 points.

Williams had eight rebounds. Fowles had a game-high five steals.

“We did some good things tonight,” LSU head coach Van Chancellor said. “We evaluated some players tonight to kind of see who could play. We are ready to go with a rotation now. Our rotation will depend on who is in the game and who is out of the game and whether they are playing big ball or small ball.”

After shooting nearly 55 percent in the first half, the Lady Tigers cooled to 47.1 percent for the game with their reserves seeing most of the second-half action.

Houston was led by guard Brandy Jones with 14 points on 6-of-17 shooting. Guard Marla Brumfield added 12 points but turned the ball over six times.

After trailing for the first time in exhibition play, 2-0, the Lady Tigers got four points each from Fowles and Ashley Thomas to pull even 8-8 after five minutes.

Six points by Chaney over the next five minutes helped LSU built a 21-10 lead midway though the half.

The Lady Tigers extended the advantage to 19, 39-20, before Houston scored the final four points of the half to trail 39-24 at the break.

LSU led by as many as 32, one more than the final margin.

Opening statement…
“Let’s make sure we are all aware of this: we did win by 31 points the last time I checked. We didn’t get beat tonight or win by seven or eight – we won by 31. Let’s not put too much of a negative spin on what we did tonight. We did some good things tonight. Marian Whitfield had 14 points. Ashley (Thomas) had three rebounds and didn’t turn the ball over. Sylvia Fowles had 18 points, 11 rebounds, four blocks and five steals in 23 minutes.”

On what he expected to get out of tonight’s game…
“We evaluated some players tonight to kind of see who could play. We are ready to go with a rotation now. Our rotation will depend on who is in the game and who is out of the game and whether they are playing big ball or small ball.”

On the performance tonight…
“Personally, I just don’t think we were ready to play. It’s not that we didn’t play hard, but we made some minor mistakes that just don’t need to happen in this program.”

On playing tonight without Erica White…
“Erica (White) gets down and gets the ball. She gets the offense going. To not have that on the floor with her out of the game, it was hard for us to get focused or get back in the game. The other point guards do things differently, but she brings something unique to the table. Just missing her today slowed us down a little bit.”

On the performance tonight…
“We didn’t come out and play like the Tigers should play. We have a lot to work on and that is why we practice.”

On the opportunity to play in the absence of Erica White tonight…
“I’m just trying to take advantage of my opportunity and that’s all I can do. Coach (Van Chancellor) called me to play hard and I made some minor mistakes.”