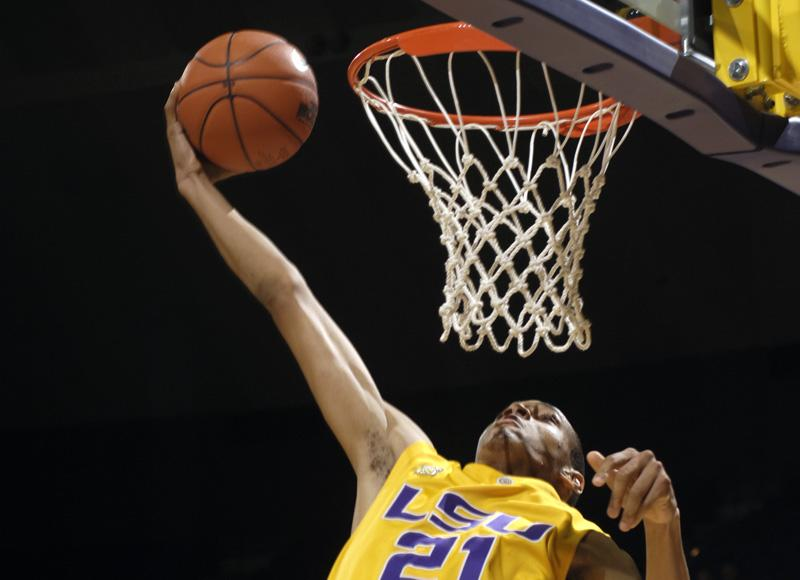 BATON ROUGE — It is still an exhibition game for the LSU men’s basketball team Tuesday night, but the Tigers will probably learn more about the 2007-08 team as they take on a group of former college players, representing EA Sports.

Tipoff in the Maravich Center is 7 p.m. and there is no radio or television broadcast of the event. The scoreboard video cameras will be available for viewing on line in the “GeauxZone” at www. LSUsports.net. Tickets are available for $5 online at www. LSUsports.net or at the LSU Athletics Ticket Office during business hours on Tuesday. The upper concourse ticket window at the Maravich Center will open for walk-up ticket business beginning at 5:30 p.m.

This will be the eighth straight year that the EA Sports team, put together annually by Maury Hanks, will come to Baton Rouge for the exhibition contest. The team has put two defeats on the LSU team during the years the team has played as LSU is 19-2 in exhibition games during the John Brady era. This will be the final year that the team is scheduled to tour against college teams as NCAA rules have changed over the years to not allow games against touring teams. This series of games was contracted in before the NCAA changed the rules about such games.

The 2007 touring edition of the EA Sports team is 1-2 coming into Baton Rouge, with the last game the team played a 74-63 loss at Iowa State on Sunday. The team was an 86-81 winner over Utah State and an 88-75 loser at Creighton in the other two games of the tour.

Robert Bergersen led EAS in the Utah State win, hitting 20 points, while Cory Violette had 13 against Creighton and 17 against Iowa State. Bergersen was the Big West Player of the Year while ranking 11th nationally in scoring (22.2 ppg) in his senior season at Boise State in 1998-99. Violette was a three-time All-WCC performer at Gonzaga from 2001-04.

The Tigers opening exhibition game was a 108-57 decision over Belhaven, an NAIA school from Jackson, Miss. In that game, LSU had a sluggish first half, missing 20 shots including all nine three-point tries. Also the Tigers were getting beat off the dribble and struggling to get much of an advantage of the boards. But in the second half, LSU shot 69.2 percent (missing just 12 shots going 27-of-39) and outrebounded the Blazers at the end of the night, 53-37, but Belhaven had two more offensive rebounds as LSU.

“I just want to see improvement,” said LSU Coach John Brady. “That’s the whole reason for playing these exhibition games is to improve from one game to next. We’ve seen some tape of the last game and I’d like to see more defensive intensity from the beginning; I’d like to see more concerted effort to rebound the ball and we are going to have to do that against this team because from a physical standpoint against Belhaven we were just better than they were athletically and we were able to get a lot of run outs and a lot of turnovers and create a lot of baskets that way.

“This team is a lot more physical than Belhaven and it’s going to present some problems that we are going to see as the year moves along. Hopefully our team around the goal will meet the challenge and we can use some double teams to defend the team that is probably stronger than we are. We are looking forward to that part of the challenge. It will be a more physical game and we hope to be able to rebound, execute and defend around the goal,” Brady said.

The Tigers open the regular season on Nov. 12, the earliest opening game in men’s basketball history, against Southeastern Louisiana and play on Nov. 14 at home against McNeese State before leaving Baton Rouge the next day to take part in the EA Sports Maui Invitational in Lahaina, Hawaii, Nov. 19-21. Tickets for the non-conference games prior to January and various three-game packages for men’s basketball are available online at www.LSUsports.net and at the LSU Athletics Ticket Office during normal business hours.