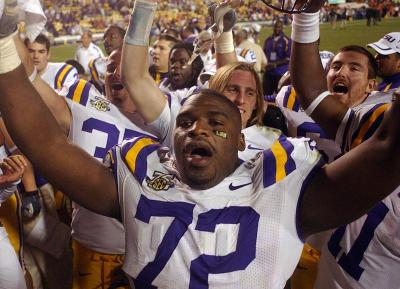 BATON ROUGE — For the first time in several weeks, it didn’t take until the final ballot from the selection panel to figure out who would be the winners of the weekly Louisiana Sports Writers Association college football players of the week.

Dawson set four ULM records in the Warhawks game, a 43-40 loss to Middle Tennessee. Dawson set the ULM career rushing record with his third touchdown of the game, a 62-yard third quarter run. The senior back now has 3,121 yards in his career. He also broke the single-season 100-yard rushing game record with his eighth, the career 100-yard rushing record with 17 and the ULM single-game all-purpose yards record with 329 yards. The senior from Bossier City averaged 14.3 yards every time he touched the ball and scored three touchdowns on the game. His 329 all-purpose yards was the second most in Sun Belt Conference history.

Dorsey was named the Southeastern Conference Defensive Player of the Week as he record a team-best seven tackles to lead an LSU defense that limited Alabama to 254 total yards and just 20 rushing yards in the Tigers’ 41-34 victory in Tuscaloosa. The senior defensive tackle from Gonzales, La., had one sale for a six-yard loss and added another tackle for a loss in the win. Dorsey led an LSU defense that held the Crimson Tide to just three first downs on its final five possessions of the contest with one of those coming via penalty.

The special teams player of the week, Turner, set a new Southland Conference record with six field goals in Southeastern’s 45-31 at Texas State on Saturday. Turner booted field goals of 20, 24, 43, 47, 23 and 47 yards to break the previous record of five that was shared by seven players, the last time happening in 1997. The season the sophomore from Houston has made 13-of-15 field goals for the Lions, including 10 straight and is 4-for-4 from beyond 40 yards.