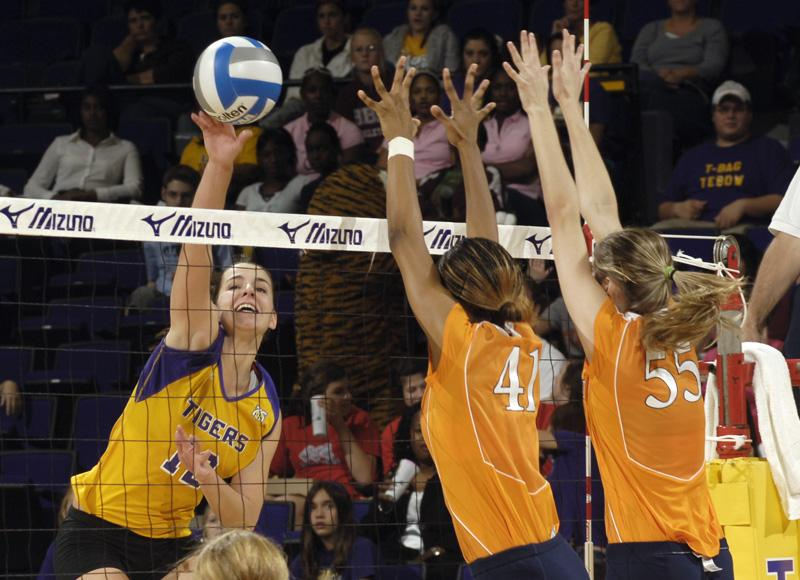 BATON ROUGE — Junior Marina Skender became the 15th player in LSU history to record 1,000 career kills, and the second Tiger this season, as the LSU volleyball team swept Tennessee, 30-17, 30-22, 31-29, on Sunday afternoon at the Maravich Center.

With the win, the Tigers posted their third-straight 20-win season, improving to 20-6 on the year and 11-5 in Southeastern Conference play. The loss dropped the Lady Vols to 9-15 overall and 4-12 in league play. The pair split their two matches this season, with each team winning the home match. Tennessee defeated the Tigers in five games in Knoxville before LSU swept at home on Sunday.

“I think our team’s attitude was that those were two matches that got away from us,” said LSU head coach Fran Flory about LSU’s wins this weekend avenging earlier season losses on the road at Kentucky and Tennessee. “We didn’t feel like we got beat in those matches, we felt like we lost. You have to credit Tennessee and Kentucky because they made the plays when they had to, but we felt like we could have won those two matches on the road.”

The Tigers remain tied with Ole Miss, one game behind Alabama, in the SEC Western Division standings. This upcoming weekend, LSU and the Rebels will travel to face the Crimson Tide in matches that will likely decide the divisional champion. Florida leads the overall SEC race by three games over Alabama with four league matches remaining and can secure its 17th consecutive title with one more win.

“I think it’s still gut check time for us,” said Flory. “We knew we could win on our home court because we have done it all year. The gut check is this next weekend on the road. We have to go to Alabama where we haven’t won in a long time.”

Skender became the 15th player in school history to record her 1000th career kill and only the sixth junior to reach the milestone. She joins with Kyna Washington, who also hit the 1,000-kill mark earlier this season, to become the first two Tigers to post their 1000th career kill in the same season since Ivana Kuzmic and Jelena Mijatovic accomplished the feat in 2004. Skender and Washington also became the first two juniors to reach the 1,000 kill plateau in the same year since Nyla Shepherd and Julie Stempel in 1990.

Skender led the match with 15 kills, giving her 1,001 kills for her career, to go with 16 digs for her 12th double-double of the year. Skender is now only 21 digs away from becoming just the 12th Tiger to reach 900 digs for her career. With her third of three service aces, she also moved into eighth place in career service aces in LSU history with 156.

Washington added 15 kills and needs only 30 to reach 1,100 for her career, while adding 12 digs for her 15th double-double of the year. Lauren DeGirolamo was the third Tiger in double-figure kills with 10. DeGirolamo also led the match with eight blocks, followed by Brittnee Cooper with seven.

Elena Martinez added to her school single-season digs record with a team-best 19 in the match. She now has 573 for the year, which puts her in fifth place in SEC history, only eight away from moving into the top three, and 83 away from the conference mark. Brittney Johnson played the entire match at setter and finished with 41 assists.

LSU dominated the statistical battle in the match. The Tigers out killed Tennessee, 55-38, while posting a considerably better hitting percentage. LSU posted a .232 mark, while holding the Lady Vols to a .115 clip. The Tigers also recorded 17.0 blocks in the three-game match, while Tennessee had only seven. LSU also out dug the lady Vols, 60-55, and posted eight service aces while the Lady Vols did not record one.

“We pushed our team real hard and we asked them to re-commit and they did a nice job, but the question mark is whether we will be able to bring that every single day,” said Flory. “I was really proud of how hard we played today.

“We still committed too many unforced, silly errors. I felt a little bit like football today where our veterans were making errors on simple plays where errors should not be made. We’re just overplaying a little bit and trying to be a touch too aggressive instead of just hitting the shot that is available. I think we have to fix that part of our mentality. The fact that we out dug Tennessee, which is one of the best defensive teams in the league, that’s a tribute to how hard we played today.”

The Tigers came out and dominated the first game. After jumping out to a 7-2 lead, Tennessee got no closer than three as LSU extended the lead to 20-9.The Tigers got their first game point at 29-14, but the Lady Vols scored three straight to extend the game before LSU closed it out, 30-17, on a kill by Angela Bensend.

In the second game, the Tigers fell behind 4-0 before coming back to tie it up at six. After two more tied scores, LSU went on a five-point run to extend the lead to 14-10. With a pair of three-point runs and a four-point swing, the Tigers stretched the lead to 25-17. LSU went on to close out the game, 30-22, on a kill by Washington to take the two-game lead into the locker room.

The Tigers fell behind early in the third game as well, 3-1. LSU tied it up at five all, but the Lady Vols retook the lead and extended it to as many as six, 11-5. With the Tigers trailing, 14-10, LSU scored three straight to get within one. Tennessee then responded with a 7-2 run to stretch its lead to six points once again, 21-15. The Tigers then began a furious comeback as LSU scored four straight and 10 of the next 12 points to take the lead, 25-23. The pair went back and forth the rest of the way, but the Tigers never led Tennessee tie it up as LSU took the game and the match, 31-29, on back-to-back kills by DeGirolamo.

LSU leads the overall series with Tennessee, 28-16, and has won five of the last seven over the Lady Vols. The Tigers got back on the winning track after falling in five games on the road earlier this season, snapping a three-match winning streak.

The Tigers hits the road for two crucial matches next weekend. LSU will take on Mississippi State on Friday at 7 p.m. in Starkville, before facing Alabama on Sunday at 1:30 p.m. The Crimson Tide lead the SEC Western Division by one game, but the Tigers defeated Alabama in Baton Rouge in five games earlier this year.

“This is really our gut check weekend to figure out if we really re-committed and are we really willing to risk and go after it and not fear failure,” said Flory. “Are we willing to attack an opponent on their court, act like we own our contacts and own the opportunities to be successful. We’ve sat back and waited for the other teams to lose on their home court and we know we can’t do that. All the teams in this league are too good to do that. Maybe five years ago or even three years ago you could do that, parity has certainly arrived.”