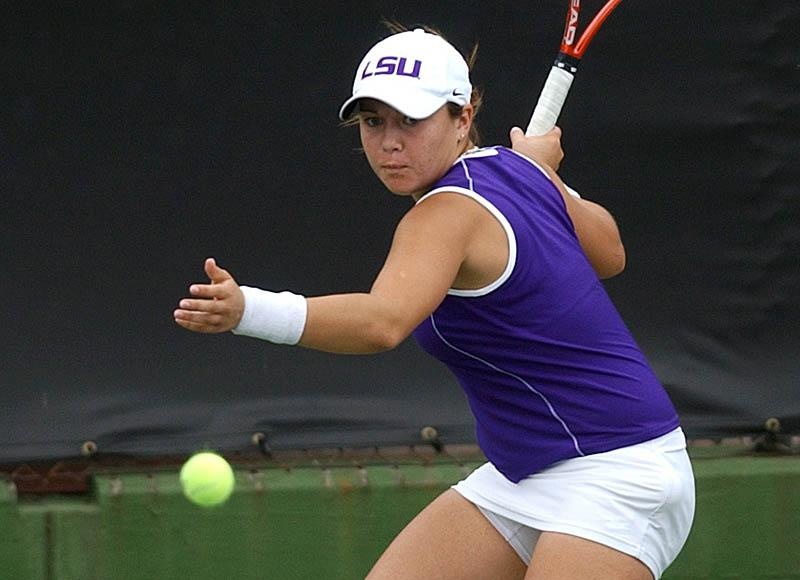 AUBURN, Ala. — LSU’s Mykala Hedberg and Staten Spencer fell in the semifinals match in doubles Flight A to Georgia’s Yvette Hyndman and Naoka Ueshima 8-3 after a strong run at the SEC Fall Coaches Classic Saturday.

A day after upsetting the nation’s 21st-ranked doubles team in the quarterfinals, Hedberg and Spencer could not overcome the Lady Bulldog duo.

In doubles Flight B Anastasiya Dubova and Nicole Kantor defeated Alice Tunaru and Elise Wettermark of Alabama 8-5 in a consolation match.

In singles play Hedberg rebounded after the defeat in doubles and pulled off a hard-fought win against Nika Koukhartchouk of Ole Miss 5-7, 6-2, 11-9.

After winning her doubles match earlier in the day, Dubova continued her winning ways in singles with a straight-set victory over Tatiana Feit of Mississippi State 6-3, 7-5.

“Mykala and Anastasiya played really well,” head coach Tony Minnis said. “It’s nice to see them back on track. But we have to play better at other positions, so hopefully we can turn things around tomorrow.”

The Lady Tigers will conclude their stay at the tournament tomorrow. Doubles action begins at 9 a.m. with singles to follow at the City of Auburn/Auburn University Yarbrough Tennis Center.