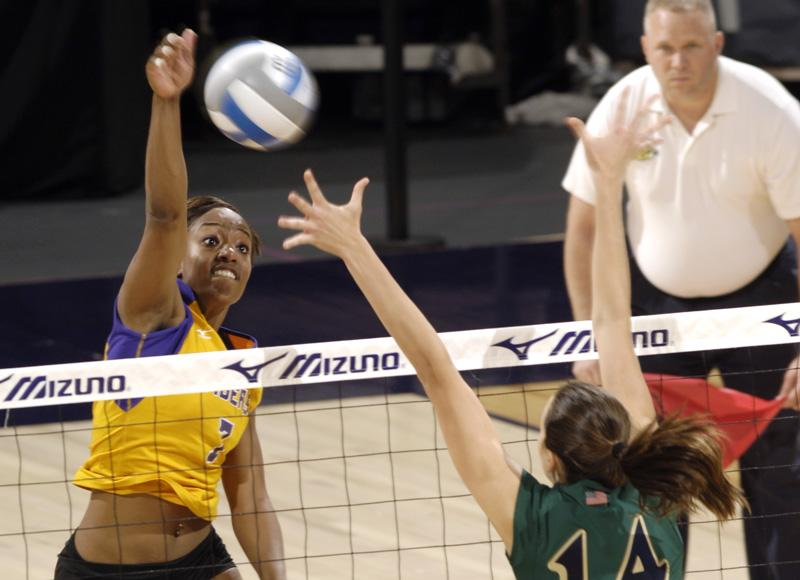 BATON ROUGE ? After defeating Kentucky in five games on Friday, the LSU volleyball team looks to sweep the weekend series as the Tigers host Tennessee on Sunday at 1:30 p.m. in the Maravich Center with all children under 12 getting in free.

The match will be broadcast on a tape delayed basis locally on the Pelican Sports Television in Baton Rouge on digital cable 113. The broadcast will be aired on Sunday at 5:30 p.m. and replayed again on Monday at 11 p.m.

As part of Mini Mike Day, all children under the age of 12 will get in for free. An inflatable moon bounce will be on the ramps outside of the Maravich Center from noon until the start of the match. Throughout the match, 100 Tiger Tails will also be given away.

The Tigers (19-6, 10-5 SEC) now sit one game behind Alabama in the Southeastern Conference Western Division and are tied with Ole Miss after a loss by the Crimson Tide on Friday. LSU avenged a five-game loss to Kentucky in Lexington with a five-game win against the Wildcats on Friday.

“I was proud of the way our team fought on Friday night,” said LSU head coach Fran Flory. “We challenged them during the week and they responded. But, they have to know that it was just the first of many steps along the way for us to reach our goals.”

Tennessee enters the contest at 9-14 on the y ear and 4-11 in SEC play, last in the SEC East and 10th overall. The Lady Vols have dropped six of their last seven matches, with the lone win coming in three games against Georgia last Friday. Tennessee’s only win on the road in nine matches this year came when the Lady Vols topped Auburn in four games at Auburn. Earlier this year, Tennessee earned a five-game win over LSU in Knoxville, defeating the Tigers, 30-28, 24-30, 30-24, 29-31, 16-14.

“We’re expecting Tennessee to be very aggressive and fight very hard for a win because they have lost a couple of close five-game matches recently,” said Flory. “They have a lot of young kids that have gotten a great deal of playing time and experience as the year has progressed. Their backs are against the wall so we will have to be prepared for a tough fight from them once again.”

Elena Martinez led the Tigers with 26 digs, followed by Skender with 23 digs, just two shy of her career high. Michelle Hensgens added a season best 18 digs while Washington had 13 and Maggie Lonergan finished with 11. Lonergan also had a career high 69 assists while tying her career high with five blocks.

Looking only at the match statistics, LSU should have won the match. The Tigers out killed Tennessee, 88-72, and out hit the Lady Vols, .237 to .223. In addition, LSU recorded one more block than Tennessee, 15 to 14, and five more digs, 99-94. One major difference between the teams came in serving with the Tigers committing 15 service errors, to seven for Tennessee, including several costly errors late in the match.

As a team for the season, LSU leads Tennessee in every offensive category, while the two are evenly matched defensively. The Tigers hold the advantage with 15.3 kills per game, compared with 13.8 for the Lady Vols, last in the league. LSU also has a better hitting efficiency for the year at .212, while Tennessee is last in the SEC with a .179 mark. In addition, the Tigers are second in the SEC in opponents hitting percentage and third in service aces, while the Lady Vols are sixth in opponents hitting percentage and last in aces per game.

Defensively, LSU is posting 3.00 blocks per game, third-best in the conference, while Tennessee is posting 2.89 blocks per game, fifth in the league. The Lady Vols do hold a slight advantage in digs per game, averaging 18.13 per frame, compared with 17.00 per game for the Tigers.

Skender is only 14 kills away from joining Washington in the 1,000-kill club and ranks fifth in the SEC with 0.44 service aces per game. If Skender reaches the kill milestone, the pair would be the first to accomplish the feat in the same season since 2005 when Ivana Kuzmic and Jelena Mijatovic each posted their 1,000th career kills, although both were transfers and only played their final two seasons at LSU. Washington and Skender would also become the first juniors to reach the milestone in the same season since Nyla Shepherd and Julie Stempel reached the 1,000-kill mark during the 1990 season.

The Tigers boast a pair of dominate players up the middle as LSU has one of the most impressive duos in the league. Cooper currently ranks second in the SEC and 25th in the NCAA with 1.49 blocks per game, while followed closely by DeGirolamo in sixth in the league and 60th nationally with 1.34 blocks per game, the only two players from the same team ranked in the top six.

Offensively, DeGirolamo leads the team, ranks 10th in the league and 109th in the country with a .325 hitting percentage, while Cooper ranks second on the team and 317th in the nation at .268. DeGirolamo also ranks second on the team with 3.35 kills per game, followed by Cooper with the third best average on the team at 2.73 kills per game. The duo also became the first LSU players to record double-figure blocking matches in the same season since Regan Hood and Megan Heinz accomplished the feat in 2003.

In her first year as the starting libero, Martinez has recorded double-digit digs in every match this year, leads the SEC and ranks 40th in the nation with 5.54 digs per game. On Friday, she broke Kassi Mikulik‘s single-season digs record and is now 101 digs away from breaking the SEC single-season mark. Martinez’s current digs per game mark would also shatter the school record of 4.69 digs per game recorded by Kassi Mikulik last season.

LSU leads the overall series with Tennessee, 27-16, and has won four of the last six over the Lady Vols, but had its three-match winning streak snapped at Knoxville earlier this year. Last season the Tigers fell behind by two games before rallying back for a five-game win in Knoxville and later in the season posted a three-game sweep of the Lady Vols in Baton Rouge.

The Tigers hits the road for two crucial matches next weekend. LSU will take on Mississippi State on Friday at 7 p.m. in Starkville, before facing Alabama on Sunday at 1:30 p.m. The Crimson Tide lead the SEC Western Division by one game, but the Tigers defeated Alabama in Baton Rouge in five games earlier this year.