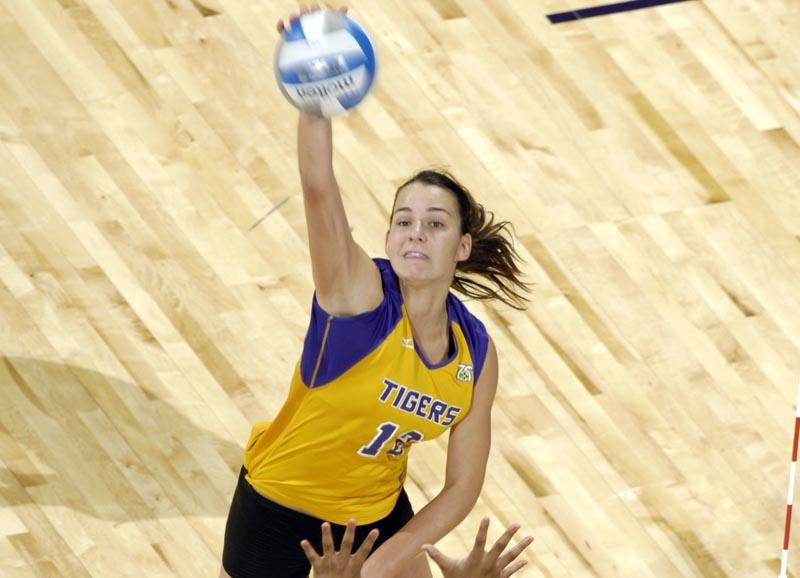 BATON ROUGE — After falling to Kentucky earlier in the season at their place, the LSU volleyball team returned the favor with a five-game win over the Wildcats on Friday night at the Maravich Center as Elena Martinez broke the school single-season record for digs.

In front of a crowd of almost 1,300, the Tigers improved to 19-6 on the year and 10-5 in Southeastern Conference play. The win by LSU, coupled with a loss by Alabama, put the Tigers a game behind the Crimson Tide in the SEC Western Division standings with five conference matches remaining. The loss dropped Kentucky to 19-7 overall and 10-5 in league play, tying the Wildcats with the Tigers for third overall in the conference standings.

“It was a gutsy performance by our kids,” said LSU head coach Fran Flory. “I’m really proud of them. They were challenged to re-commit to this season and they did. We had a great week of practice, but they have to understand that this is just one step. “We have many more to make, but I think we’re headed back in the right direction.”

“Kentucky is a very good team and they definitely showed us some unbelievably physical play that we haven’t seen in this league in a while,” said Flory. “I think it was a very balanced effort for our entire team and a great team performance.”

Defensively, LSU posted the most blocks of the season with 20.5, recording the first 20-block match for the Tigers since recording 21 against Mississippi State in October of 2004. Kentucky posted just 11.0 blocks, but did hold a slight advantage in digs with 88 compared to 82 for LSU.

“That was our number one priority in our game plan, that we had to score points blocking,” said Flory. “We did a great job early, but when our blocking didn’t come around and we weren’t successful blocking, we were not successful. The disappointing part is that our offense is not where it needs to be, but I’m really proud of a gutsy, gutsy performance by our kids. I’m really proud of their effort and how hard they played and the heart that they showed.”

While tying her school record for digs in a match with 34, Martinez also broke Kassi Mikulik‘s single season digs record. For the year, Martinez now has 554 digs for the year, moving into sixth place in single-season digs in SEC history, now 101 behind Shelly Gross of Georgia’s single-season record of 655 in 1986.

The Tigers came out and dominated in the first game. With the score tied at 13, LSU went on a six-point run to pull ahead, 19-13. In the six-point swing, Kentucky contributed to its demise by committing five attack errors and a ball handling error. The Tigers sent it to game point leading, 29-17, but the Wildcats scored three straight before a kill by Cooper ended it, 30-20.

LSU fell behind early in the second game and could not get back into it until late. Kentucky used a six-point run to stretch a one-point lead to a seven-point advantage, 16-9. The Tigers trailed by as many as nine, 28-19, before mounting a furious comeback. LSU scored four-straight and seven of the next eight points to get to within three, 29-26, including fighting off game point twice, The Wildcats then got a kill by Lauren Rapp to send the match into the locker room tied, 30-26.

The Tiger fell behind early again in the third game, trailing by as many as four, 13-9, before coming back to tie it up at 17. After three more tied scores, LSU took the advantage for good, 23-22, as part of a three-point run. The Tigers went on to take the third game, 30-26, on a kill by Washington.

The fourth game saw seven tied scores and LSU lead by as many as three and Kentucky lead by as many as four in the early going. With the score tied at 22, however, the Wildcats scored three straight to pull ahead, 25-22. The Tigers came back once again to tie it up at 26. Unfortunately, Kentucky scored four of the final five points to send the match to a fifth game, marking the eight five-game match of the year for LSU.

After falling behind 2-0 in the fifth game, the Tigers went on a five-point run to take the lead for good. LSU stretched its lead four, 10-6, but the Wildcats got back as close as two, 12-10. The Tigers then closed it out on a three-point run, ending with a block by DeGirolamo and Bensend, 15-10.

Kentucky remains ahead in the overall series with LSU, 24-21, but the Tigers have closed the gap in recent years. LSU has won five of the last seven meetings, including two-straight in the Maravich Center last year, but the Tigers had a three-match winning streak snapped in Lexington earlier this year.

LSU remains at home to host Tennessee on Sunday at 1:30 p.m. The match will be broadcast on a tape delayed basis locally on the Pelican Sports Television in Baton Rouge on digital cable 113 and also streaming on the internet at pelicansportstv.com. The broadcast will be aired on Sunday at 5:30 p.m. and replayed again on Monday at 11 p.m.