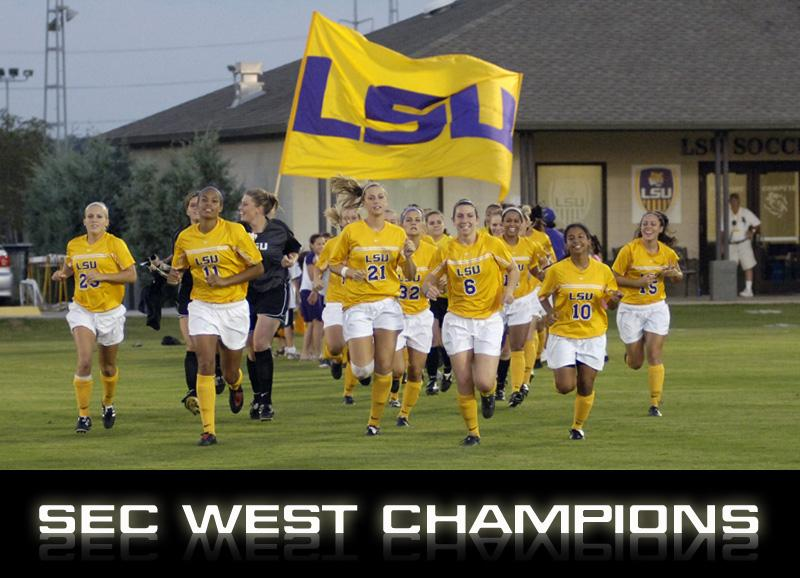 FAYETTEVILLE, Ark. ? The LSU soccer team captured its first ever SEC Western Division title on Friday night with a 1-0 win over Arkansas at Lady ?Back Field as sophomore Rachel Yepez netted the game-winner in the seventh minute of overtime.

Sophomore midfielder Michelle Makasini played a perfect through ball between two Arkansas defenders to a streaking Yepez, who took two touches and slotted home the game-winner from 10 yards out at the 96:43 mark for LSU’s first overtime win of the season.

Yepez finishes the regular season as the team’s leading scorer and the top goal scorer in the Southeastern Conference as she now has 13 goals and 28 points on the year.

“This win is certainly a credit to this year’s team and to everyone who has been involved with this program over the last two years,” said LSU head coach Brian Lee. “We always talk about deserving to win, and these kids have taken that idea to heart and have worked very hard over the last year to achieve all that they have this year.”

They also extend their winning streak to four games over the Lady Razorbacks (8-11-1, 1-9-1 SEC) as they will open the SEC Tournament with their highest seed in program history. Their 19 points in SEC play is also a team record since the league converted to the point system in 2002.

“Full credit goes to Arkansas for having one game left in their season and coming out with some fire and really fighting and battling for the entire match,” Lee said. “That’s a testament to their coaches and players and the character they have in their program.”

The Tigers had the run of play throughout the match as they outshot the Lady ?Backs by a 17-5 margin, including an 8-3 count in shots on goal. They also held an 8-3 edge in corner kicks. LSU was dominant in the attack particularly in the second half and overtime as it fired 14 shots over that stretch to just one shot for Arkansas.

Sophomore Melissa Clarke appeared to give the Tigers a 1-0 lead in the 36th minute of play when she rifled a shot inside the near post from 12 yards out in the left side of the penalty area, but the goal was disallowed on an offside call by the linesman.

The Tigers again had three golden opportunities to take the lead in the second half as Makasini was denied a one-on-one situation with the keeper in the 57th minute, while freshman Taryne Boudreau and sophomore Chelsea Potts each had shots deflect off the crossbar late in the period.

Senior goalkeeper Valerie Vogler was outstanding once again as she made three saves to extend her team single-season record to eight shutouts on the year. She is now just one clean sheet away from tying the career record of 15 shutouts set by former Tiger Bonnie Otillio from 1999-2001.

The 2007 SEC Tournament returns to Orange Beach, Ala., for the third straight year and will kick off on Wednesday with four games scheduled to begin at noon at the Orange Beach Sportsplex. Two semifinal games are scheduled for Nov. 9 followed by the tournament final on Nov. 11.

“We’re going to Orange Beach to try to win the tournament, but obviously the SEC is one of the top conferences in the country and each game is a battle,” Lee said. “Auburn is a great team that beat us 2-0 just a few weeks ago and will be a difficult challenge for our club. It’s important that we play with great intensity when we step on the field on Wednesday.