Behind the Scenes: The LSU Football Video Staff 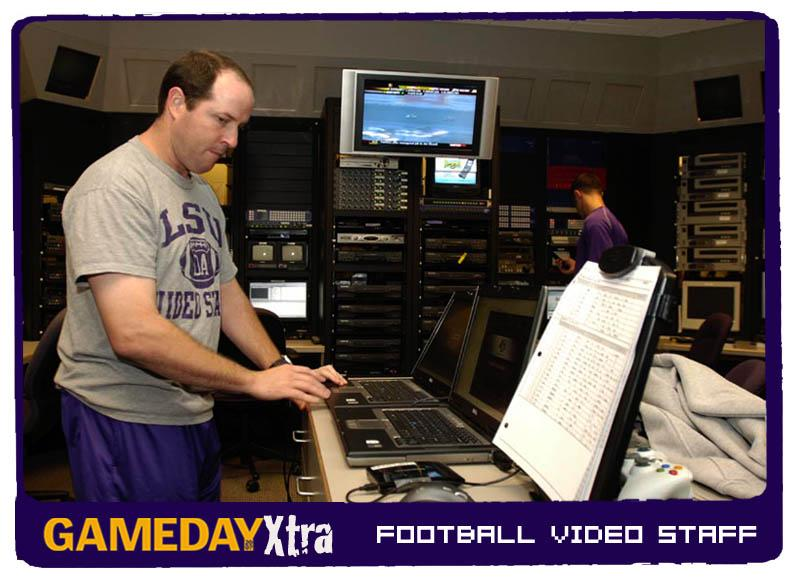 On a sultry and hot August afternoon, student workers of the LSU football video staff climb into scissor lifts that raise them closer to the blazing sun. Day after day members of the video staff climb into those lifts and raise themselves 50 feet off the ground. Day after day in the scorching heat and humidity, they take with them a camera and tripod, along with water, a hat and plenty of sunscreen.

So why do they do it?

The reason is simple.

“Being on the team and being in this program, we all have a role to fill out for this team, and we do our best to fulfill that role in every way we can,” student worker David Trichel said.

Every day in fall camp and throughout the entire season the seven student workers in the football video department film practice high above in the lifts so that after practice the coaches can watch the video and use it as a teaching tool for the players.

Although taping practice is one aspect of the video staff’s job, it certainly is not the only thing they do, not by a long shot. On a typical game week, the staff works long hours to make sure the team is as well prepared for the upcoming game as possible.

Here is how the video staff works behind the scenes to help make the LSU football team one of the best in the nation week after week.

A typical week during the season starts on Sunday for the video staff. Video Coordinator Doug Aucoin, who is in his 11th season with the LSU football team, usually arrives in the spacious video center inside the football operations center around 9 a.m. to begin exchanging video of the previous night’s games with the next opponent. Because of the technology that LSU has acquired, the video of the games are exchanged over the Internet, not by mail. Since the process of exchanging tapes has been simplified, Aucoin and his staff work ahead of schedule to make sure they have everything ready for the coaches.

“We’re already working on Arkansas because we exchange video with everybody we play, so when we play Arkansas the last game of the season, we’ll have their first 11 games in to study,” Aucoin said.

After Aucoin and his Assistant Video Coordinator, Brad Mendow, receive the next opponent’s video, they put the video into the computer system and get ready to start making cut-ups.

A cut-up is a specific situation inside a game for the opposing team’s offense, defense or special teams that the video staff groups together from all that opposing team’s games. To make it easier to understand, here’s an example. After the video staff received Alabama’s last game against Tennessee, they could make a cut-up of every time Alabama’s offense ran a play in a goal line situation. Not only would the cut-up of the goal line situation include the Tennessee game, but it would also include every other game Alabama played this season. The goal line cut-up would feature every time the Crimson Tide’s offense had been in a goal line situation for the entire season.

However, before the cut-ups are made, the football graduate assistants will break down the opponent’s game in all three phases ? offense, defense and special teams – then the GA’s will log every play into the computer system.

“The GA’s know the coaches’ terminology and what the coaches call everything because they are in the meetings,” Aucoin explained. “So the GA’s are important for that reason because the coaches really rely on them doing a good job and being efficient in breaking the plays down.”

After the grad assistants have logged all the plays into the system with all the correct terminology, Aucoin and his staff are free to make the situational cut-ups for all the opponent’s games this season. Then they will load the cut-ups and the entire game video into the server, so when the coaches are ready to start breaking down the opposing team’s film and start forming a game plan, the cut-ups and game film will be waiting for them in the server. All the coaches have to do is pull it from the server and watch it.

“I’m running a 32-station video network where the coaches have laptops in their office hooked up to my network so they can watch video in their office,” Aucoin said. “They have computers in their meeting rooms. Everything is computerized, and technology has advanced so much that it has changed the process for the coaches as well as the support staff.”

When Monday rolls around the video staff has already equipped the coaches with all the video they need of the opposing team’s offense, defense and special teams.

Because the next opponent’s video is finished, Aucoin and Mendow focus on upcoming opponents. They edit and make cut-ups of the games for the future opponents in the morning, but when the afternoon comes the focus shifts to covering practice.

“Our students usually report around 1 or 1:30 and get ready for practice,” Aucoin said. “They go out and shoot five or six cameras on every practice.”

When the students are up on the lifts shooting practice, there is no tape or film that they are using to record the action. Instead, the students slip hard drives into the cameras, and everything they shoot is recorded directly on the hard drive.

“After practice the students mount the hard drives on the computer, and Brad and I push it into the system so when the coaches walk off the practice field, it’s on the network waiting for them,” Aucoin said.

Monday is also a day for Mendow to make DVD’s for the players to review on their own time away from the practice field.

“We run the past four games onto a DVD for the players,” Mendow said. “That’s for them to bring home and grade themselves and review it.”

Tuesday is the day Mendow spends most of his time working on future opponent’s videos. He receives the games from the other team’s video department and then begins to edit and make cut-ups.

“I’ll use Tuesday to start pulling the video off and putting it into our server. That way we stay ahead of the game, so when it comes up to the week we’re playing that team or two weeks before, we already have all of their videos in. Then the GA’s can watch it and break it down,” Mendow explained.

Most of Tuesday and Wednesday is focused on shooting and editing practice because those practices are heavier in workload than the Monday practice.

On weeks where the team travels to an away game the video staff uses Thursday as a day to pack all of the gear and equipment that will be needed for the game. The students film practice in the afternoon while Aucoin and Mendow remain in the video center preparing for the trip. One student, David Trichel, also remains in the video center with the two fulltime staff members.

Trichel, who is in his third year with the staff, is in charge of creating and editing a short motivational video that the team watches every Thursday at the last part of the team meeting. Each week Trichel spends about 20 hours creating a new video to pump the players up.

“What we do for the motivationals is we take game highlights from as many angles as possible and use music, movie clips and quotes and basically make a music video with the players’ highlights,” Trichel said.

Because it is so time consuming, Trichel’s sole focus is on making the weekly video, but it’s something he loves to do because of the impact it can have on the players.

“Whenever we play these on Thursday it’s the last thing that the team, together in their team meeting room, sees before they break,” Trichel said. “So it stays with them Thursday night, Friday night and into Saturday when they get to play the game.”

Whether the team is playing at home or on the road, Friday is the day the video staff uses to set up the hotel because even if it’s a home game the team stays in the Lod Cook Alumni Center. The staff equips three rooms – one for the offense, defense and special teams ? with video equipment and laptops so the coaches can conduct meetings.

The students arrive at the operations center four hours before game time for home games to pack up all the equipment and bring it over to the stadium. Once inside the stadium, two students set up cameras in the end zones while one student sets up a camera in the press box.

Mendow, the Instant Replay Technician for the SEC, sits in the instant replay booth.

Once the TV truck sends him the different views of the play, he gets on his computer and sends the views over to the replay official who is also sitting with him in the booth.

“He has a remote to where he can rewind, fast forward and use slow motion. He gets on the headset with the ref, and once we finally come up with solution and what we think the call is, he relays the message to the ref who makes the call on the field,” Mendow explained.

“By the end of the game, the first three quarters are already edited, and for an away game, we’ll edit the fourth quarter on the way to the airport,” Aucoin said. “For a home game, when the game is over we bring the laptops over to the video center and replicate all the video up to the network because when the game is over the coaches will shower, get dressed and a lot of them will come over here and start grading the game an hour after the game is over.”

After every game the video staff wraps up any final editing they need to do before they head home to get much needed sleep because on Sunday the whole process begins all over again.

“It’s a job because we work a lot of hours,” Aucoin said. “But with the job comes a lot of joy and fun because we have resources here at LSU to do our job effectively.”