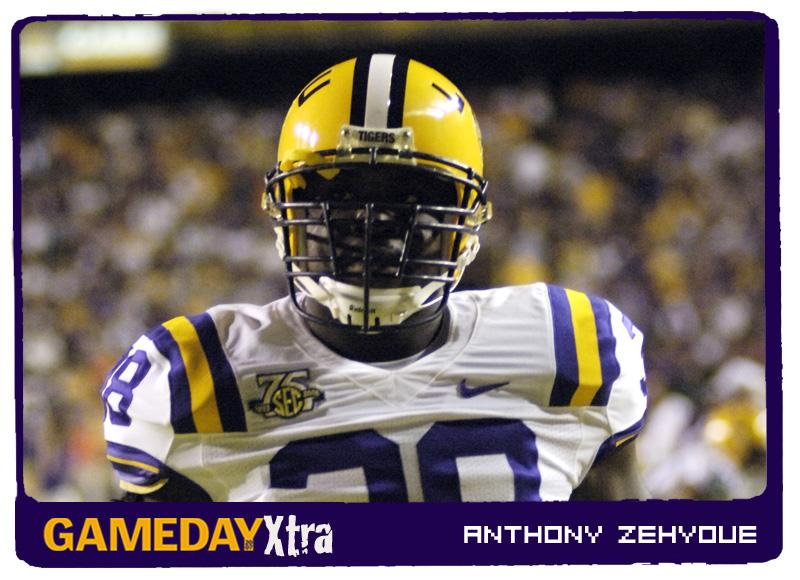 On Christmas Eve 1989, Charles Taylor and a small group of rebels invaded Nimba County, an inland territory in northeastern region of Liberia. Taylor and his forces, by this time known as the National Patriotic Front of Liberia, met opposition from President Samuel Doe and the Liberian Army and civil war broke out.

In the fall of 1990, just before President Doe was to be executed by the N.P.F.L. and in the midst of bloody infighting, Anthony Zehyoue (pronounced “zay-you”) left his home, his wife Annie and their four children in Liberia to pursue a PhD in chemistry at LSU. A Fulbright scholar having already earned his master’s degree in chemistry at Marquette University, Zehyoue was familiar with the United States, but had little news from the war-torn country where he left his family.

Zehyoue did what any husband and father would do and moved his family from Liberia to Baton Rouge the following year as war was still rampant in the West Africa nation. There begins a story of a boy, his son also named Anthony Zehyoue, who — through tremendous hardship and struggle — would put on the purple and gold and play in front of thousands on Saturday nights in Tiger Stadium.

A New Home in America

It’s tough for Anthony to remember his home. He was only weeks away from turning six when he and his family followed his father halfway around the world.

“I don’t remember much, just a couple of friends that I had. That’s about it,” said Zehyoue.

He does remember how difficult the move was, though, on him and his entire family.

“When we first got here was definitely the most difficult time for us. The way of life in America was so much different than what we were used to. None of us, except for my dad, knew anything about America or the people here. In Liberia, I never went to school because of the war and then we moved to America. I started school in first grade when I should have started in kindergarten. So I was the youngest kid and the foreign kid.”

The entire Zehyoue family felt the same way. Living off their father’s scholarship money when they first arrived didn’t help, either. Only after listening to Anthony describe his childhood do one might understand why his family turned out to be as successful as it has.

“My parents struggled and didn’t have the best jobs, if they had jobs at all,” Zehyoue said. “Their selflessness and putting us before them all the time is the reason why we’re so successful. They never gave up on us. None of us have ever struggled. They just cared for us and did whatever they had to do.”

Not struggling doesn’t mean it was easy. Anthony, like every kid, had his own problems to fight through, starting in the classroom.

“I remember I hated school because all the kids were terribly mean. Elementary school was especially bad because I was so quiet and shy. I’ll never forget my teacher, she was so mean to me,” says Zehyoue. “She didn’t like that I was shy, so she would always tell my parents that I was uncooperative. I would always be in trouble when I got home.”

In Liberia a different type of problem continued. Family members were dying.

“Since we left, only two other family members have left the country,” said Zehyoue. “The rest have either remained there and are still alive or have died.”

Civil war raged on in Liberia until August 1995, when Taylor agreed to a cease fire at a conference sponsored by the United Nations, the United States, the European Union and the Organization of African Unity.  Democratic elections were held in 1997 and Taylor and his new National Patriotic Party won more than 75 percent of the votes. Taylor was now the president of Liberia and his party members made up the national assembly. They arrived at the capital, Monrovia, by force and ruled the same way.

From 1989-96, the first Liberian Civil War claimed the lives of more than 200,000 people. One out of every 17 people in the country died, and many of the rest were uprooted and the economy was in strict decline.

Anthony would speak with friends and family from home about once a week, but still didn’t know the voice on the line at all.

“I don’t remember (my family) at all. My parents would try to explain the relationship between them and me …but at the same time I didn’t know who I was talking to. I had pictures, but I didn’t know who the person was.”

“It was especially tough when we found out someone had died. I couldn’t really mourn because I never knew them. My parents would be upset, but I couldn’t mourn,” he recalls. “They would show me hundreds of pictures. I still didn’t know who they were.”

Civil war raged in Liberia again from 1999-2003, and the bloodshed continued. Taylor was exiled into Nigeria in August 2003, and the United Nations sent a peacekeeping force into the country the following month. UN troops still occupy the area.

Football and a “Free” Master’s Degree

As Liberia’s unrest and bloodshed began to slow, life got easier for the Zehyoue family in the United States. Though they had planned to move back to Liberia eventually, the constant presence of violence and war prevented the family from doing so, and a life was made in Baton Rouge.

Anthony’s father became a chemistry professor and his mother worked at a daycare center at Glen Oaks High School. Anthony’s life began to come together, as well.

“I started to open up in high school, so it got a little bit easier,” he says, “And I was a pretty good football player. That helped, too.”

In fact, football helped him get to where he is today.

Having already earned his history degree from LSU, Zehyoue began pursuit of a master’s degree in secondary education. A former walk-on, he now attends LSU on a football scholarship — something his parents, especially his father, have taken a liking to.

“He likes it now ? I’m getting a master’s degree for free.”

Zehyoue is a scout team player. His job is to prepare the first- and second-team offenses to play against the defense they’ll oppose the following Saturday. It’s a role rarely praised but often needed and Zehyoue has played it well for four years.

“When I first walked on I didn’t know if (the scout team) was really necessary. I felt like I couldn’t do many things right because the coaches wanted us to play as if we were someone else and they were very particular about what they wanted to see. Over my experience in the program, I’ve found that it’s very helpful because you can see the plays we were lazy on was affects the offense on the field.”

Longing to Help Others

Talking about football, one can see Zehyoue is interested and enjoys the game. But his passion is teaching. And the focus and determination learned from playing football are easily visible when he talks about what he loves.

“When I was coming up through school, I felt like my education was 50/50,” says Zehyoue. “Fifty percent of my teachers were wonderful and fifty percent were just lousy. It was either all or nothing. I started realizing that a lot of kids just don’t get the attention they need and a lot of teachers just don’t care.”

“A lot of kids I went to high school with ended up falling through the cracks and to me it’s directly related to education. I just know that I want to be a teacher.”

Success in the educational field doesn’t come as a surprise in the Zehyoue family. Apart from his parents who both work in education, Zehyoue’s siblings are excelling as well: his oldest sister, Banti, is a school-based social worker, his other older sister Teaway is a second-year graduate student at Southern University pursuing her master’s in public administration, and his younger brother, Elijah, is a freshman at Morehouse University in Atlanta.

The Zehyoue story is an improbable one. A family of six (now seven), escapes from a country in the midst of a civil war that eventually killed more than 250,000 people. Without steady income or the support of an extended family, the parents and children work together to produce three college graduates, an LSU football player, a college freshman and a younger sister working her way there as a freshman in high school. Hollywood couldn’t write it any better.

The lesson to be learned:

“You have to help yourself and be a man and take care of your personal responsibilities,” says Zehyoue. “I’ll take that with me as long as I live.”